Where To Buy 2020 Detroit Tigers Tickets?

The Detroit Tigers single-game tickets went on sale on the primary market on Friday, February 21 via the team's website. Information on season tickets and the team’s Triple Nine flexible mini packages are available directly from the team.

On the secondary market, TicketIQ will offer fans a Low Price Guarantee on all Major League Baseball tickets. That means that if you find a secondary market ticket for less on a site like StubHub or Vivid, we’ll give you 200% of the difference in ticket credit. TicketIQ customers save up to 25%.

How Much Are 2020 Detroit Tigers Tickets?

On the secondary market, most tickets for home Tigers games are available for $20 or less.

Overall, the average asking price for a Detroit Tigers ticket on the secondary market is $53, the lowest since the 2015 season and down 22.6% from the 2019 season. That year, tickets averaged $65 on the secondary market, the team’s highest since 2011. The Tigers’ cheapest season was 2015 and 2012 at $44. The Tigers are ranked 19th in terms of price across Major League Baseball.  Opening Day tickets for the Detroit Tigers are averaging $183. The priciest seat in the league is $167 for a Boston Red Sox home game. 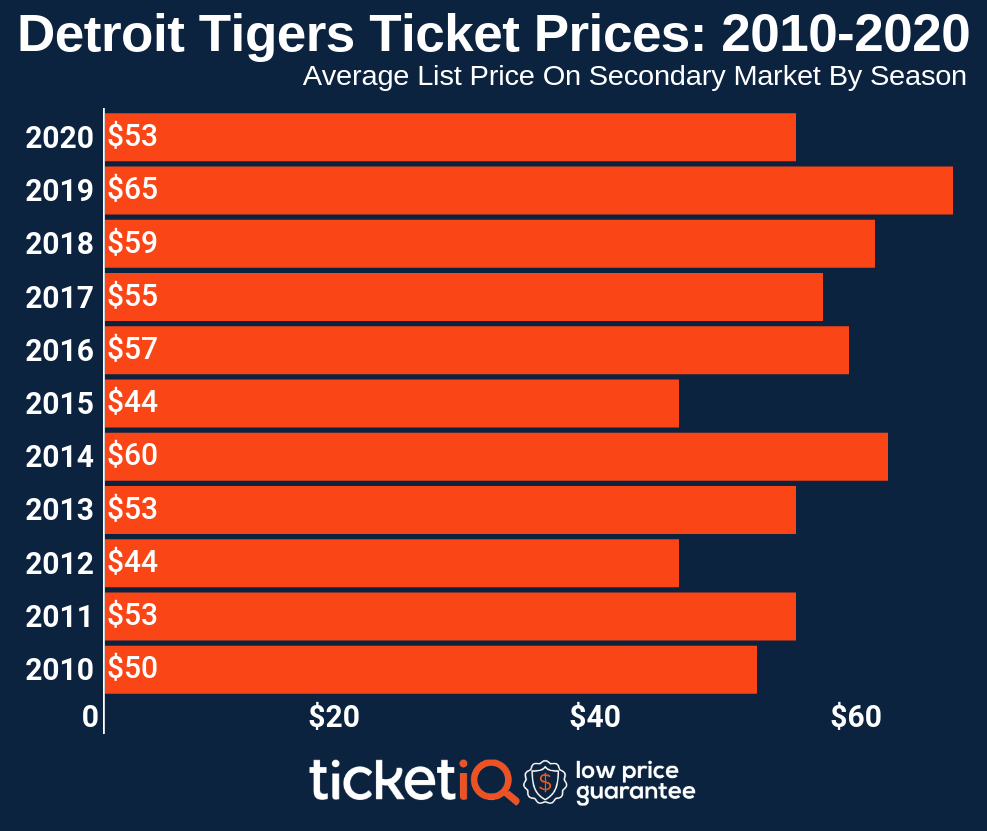 On the primary market, fans can request information about season tickets through the team. Season tickets are at a discounted rate as compared to single-game tickets. Season-ticket holders also get benefits including discounts on concessions and merchandise, additional Opening Day tickets, access to presale, early entry and express entrances and concession lines.

Half season and 28-game ticket plans as well as the Triple Nine pan are available via the Tigers. These plans enroll fans in the Detroit Tigers 1901 Society, a new program to provide fans benefits year-round.

The Tigers and Comerica Field encourage fans to use the digital ticketing option via the MLB Ballpark app. Fans can view, transfer, buy or sell tickets using the app.