Where To Buy 2019-20 Detroit Pistons Tickets

Detroit Pistons season tickets, 10-game packets and single-game tickets are currently available. Season tickets and 10-game packets are available directly through the team, and single-game tickets are available via primary market partner Ticketmaster.  A consistent mix of upper and lower level tickets are available for every game on the 2019-20 Pistons schedule, with prices varying based on opponent. The Hawks game on October 24th starts at $18, while the Wizards game on December 26th starts at $25, and are both examples of cheaper games. The cheapest tickets for the Bucks start at $36, with the most expensive game being the Lakers March 22nd visit, which starts at $55. The most expensive tickets are typically located  is Sec 122, Row 13, which is a Club seat that has prices ranging from $250 for lower-demand games to $420 for the Lakers game.
Below is a Ticketmaster Seating Chart that shows unsold primary tickets for a typical game. 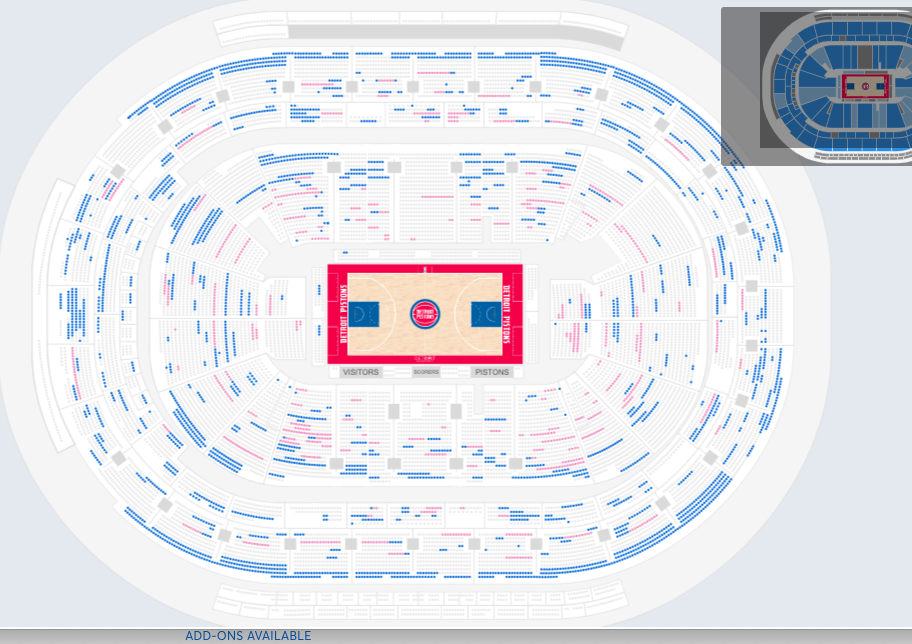 While there is lots of availability directly from the team, for many lower level sections, the secondary market is the more plentiful option. TicketIQ has Low Price Guarantees on Detroit Pistons tickets for all sold out games on the 2019 schedule, in addition to Low Price Guarantees on all NBA tickets. That means that if you find a secondary market ticket for less on a site like StubHub or SeatGeek, we’ll give you 200% of the difference in ticket credit. TicketIQ customers save an an average of 5%-20% compared to StubHub and SeatGeek.
🎟️ Visit Ticketmaster for Unsold Face Value Pistons Tickets

How Much Are 2019-20 Detroit Pistons Tickets

Primary market single-game tickets start around $20 per ticket for lower demand games. Prices for higher demand games like match-ups with the Warriors, Clippers and Rockets start between $34 and $40 per ticket. On the highest end of the spectrum, their match-up with the Lakers starts at $75.
On the secondary market, the overall average asking price for a Detroit Pistons home game is $69, down about 9% from last season's $76. Pistons tickets are the third cheapest across the NBA. The highest average asking price in the league is $473 for a Los Angeles Lakers home game. 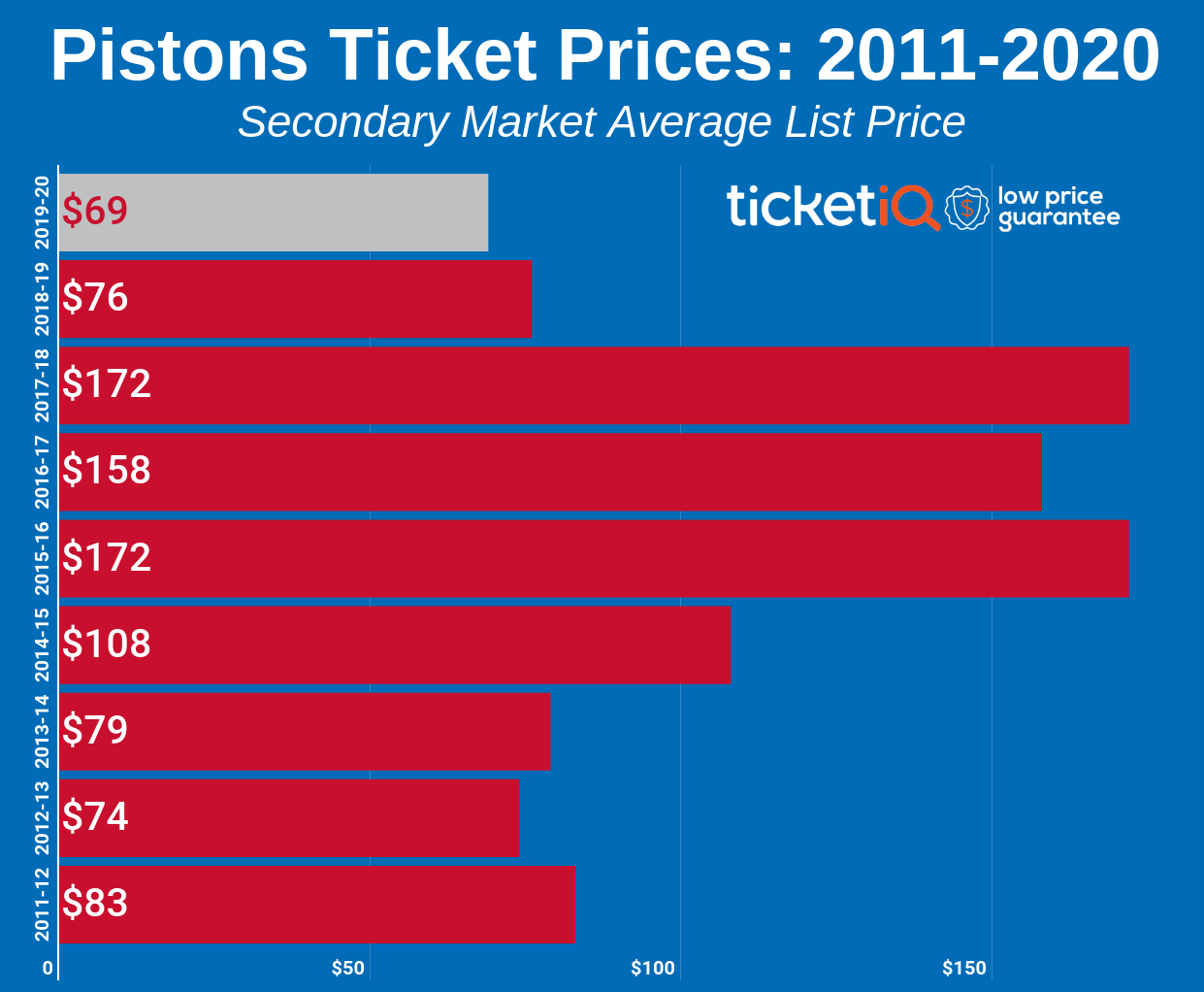 Where are Pistons Season Tickets and Mini Plan Options

The Pistons offer full or half season tickets, though Players Club tickets for both are currently sold out, and sideline seats for half-season tickets are also sold out. Full season tickets range in price from $880 for 200-level seats to $10,560 for Rehmann Club tickets, while half-season tickets start at $525 for 200-level seats and go up to $5,670 for Rehmann Club seats. All season ticket holders get invitations to exclusive events, early entry into Little Caesars Arena, merchandise discounts, access to concert presales, and other benefits.
The Pistons have three choices for 10-game packages -- the Big Game Package, Weekend Plan, and Weekday Plan. The Big Game and Weekend plans are the priciest, with seats ranging in price from $199 in the 200 sections to $2,599 in the East Club, Rows 5-17. The Philadelphia, Chicago, the Los Angeles Lakers and Golden State games are all part of the package. The Weekday Plan is the cheapest option, with tickets starting at $169 in the 200 sections and going up to $2,379 in the East Club, Rows 5-17.
Where are Club Seats at Little Caesers Arena
The Pistons are also offering several Premium Experience options. These include private suites, club seats, lode boxes, and courstide seats. Fans with premium experience tickets also have access to the some of the exclusive clubs around Little Caesars Arena. Those include the Players Club, the Rehmann Club, the Motor City Casino Club and the Legends Club
Fans can digitally manage their Pistons tickets using Ticketmaster's My Account Manager, which allows fans to access, sell or transfer seats on a mobile device. 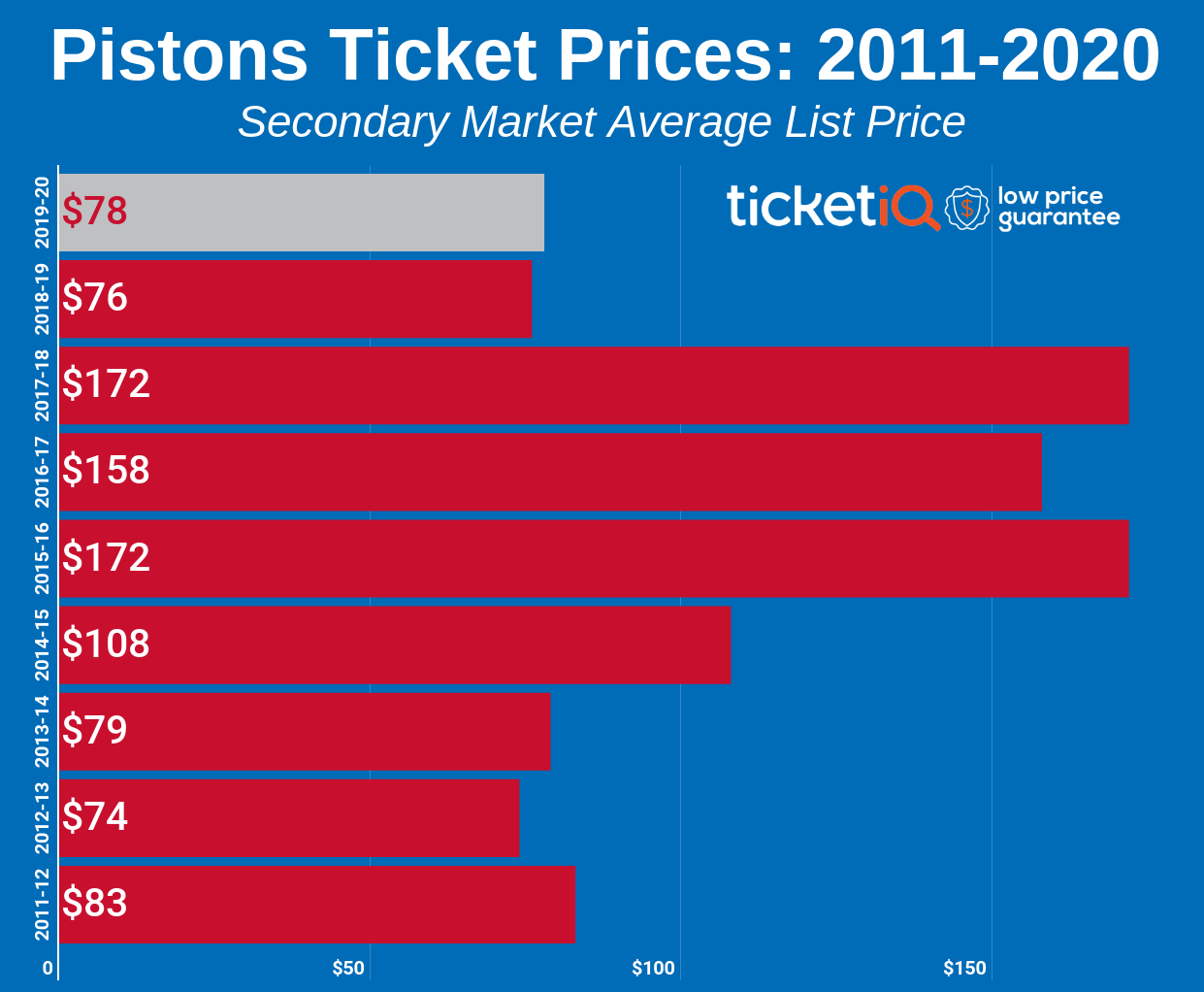 Three of the top ten most expensive home games are against California teams  -- the Lakers, Warriors and Clippers. Four of the games are also within a week of each other in March. Below is a look at all of the top ten priciest games on the secondary market: