Where To Buy Indiana Pacers Tickets

Season tickets and partial plans for the Indiana Pacers are currently available through the team website. Single-game tickets will go on sale Thursday, September 26 via Ticketmaster.

On the secondary market, TicketIQ has seats to all Indiana Pacers games. and offers a Low Price Guarantee on sold out all sold out NBA games. That means that if you find a secondary market ticket for less on a site like Stubhub or Seatgeek, we’ll give you 200% of the difference in ticket credit. TicketIQ customers save an average of 5%-20% over Stubhub or Seatgeek. Below is the a seating chart for the Lakers game on December 17th, which is the most expensive game of the season. 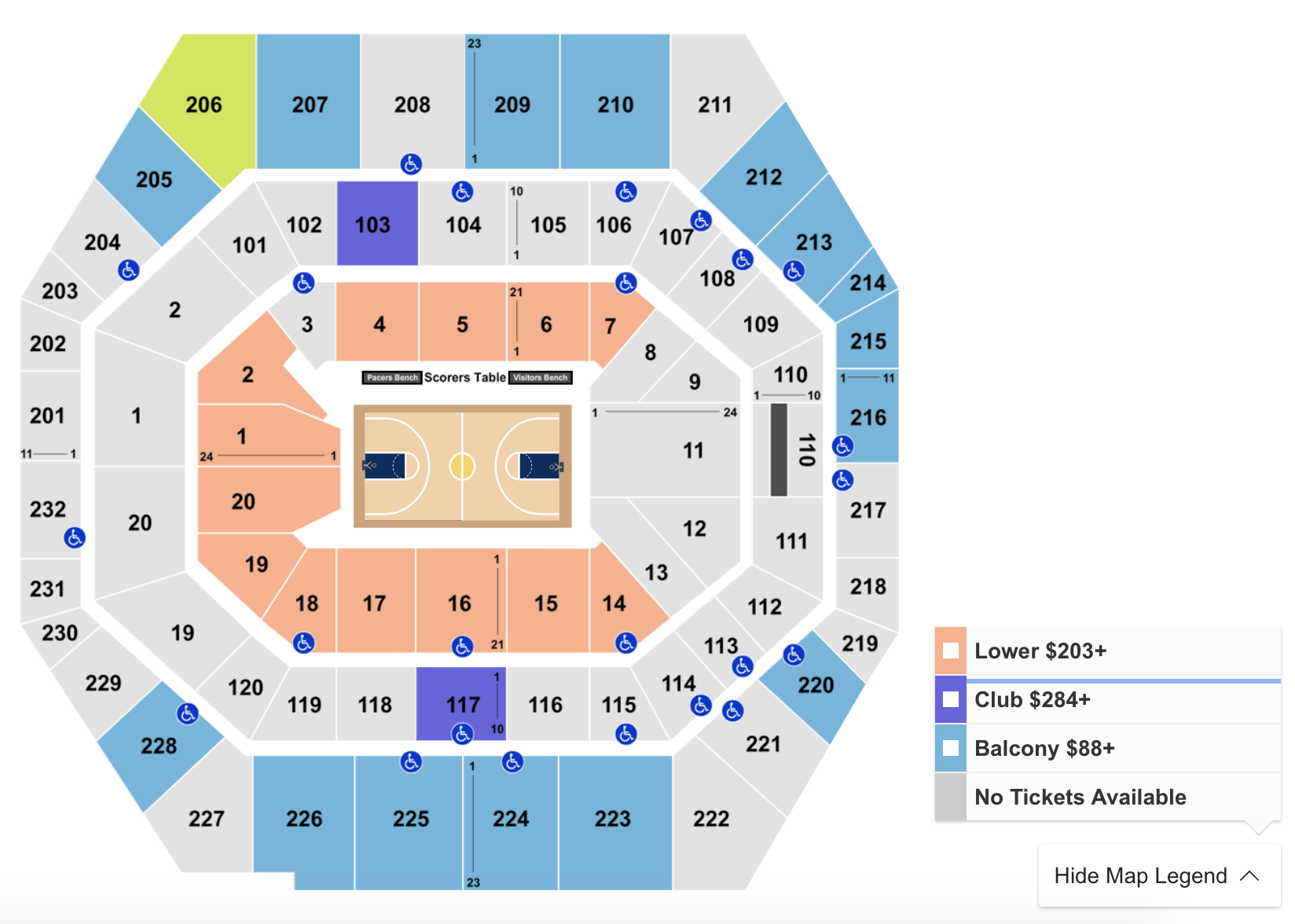 How Much Are Indiana Pacers Tickets

Pacers tickets are the fourth priciest of the decade on the secondary market. The highest average as $112 in 2017-18, when the Pacers finished second in the Central Division and took Cleveland to seven games before losing in the first round of the playoffs. 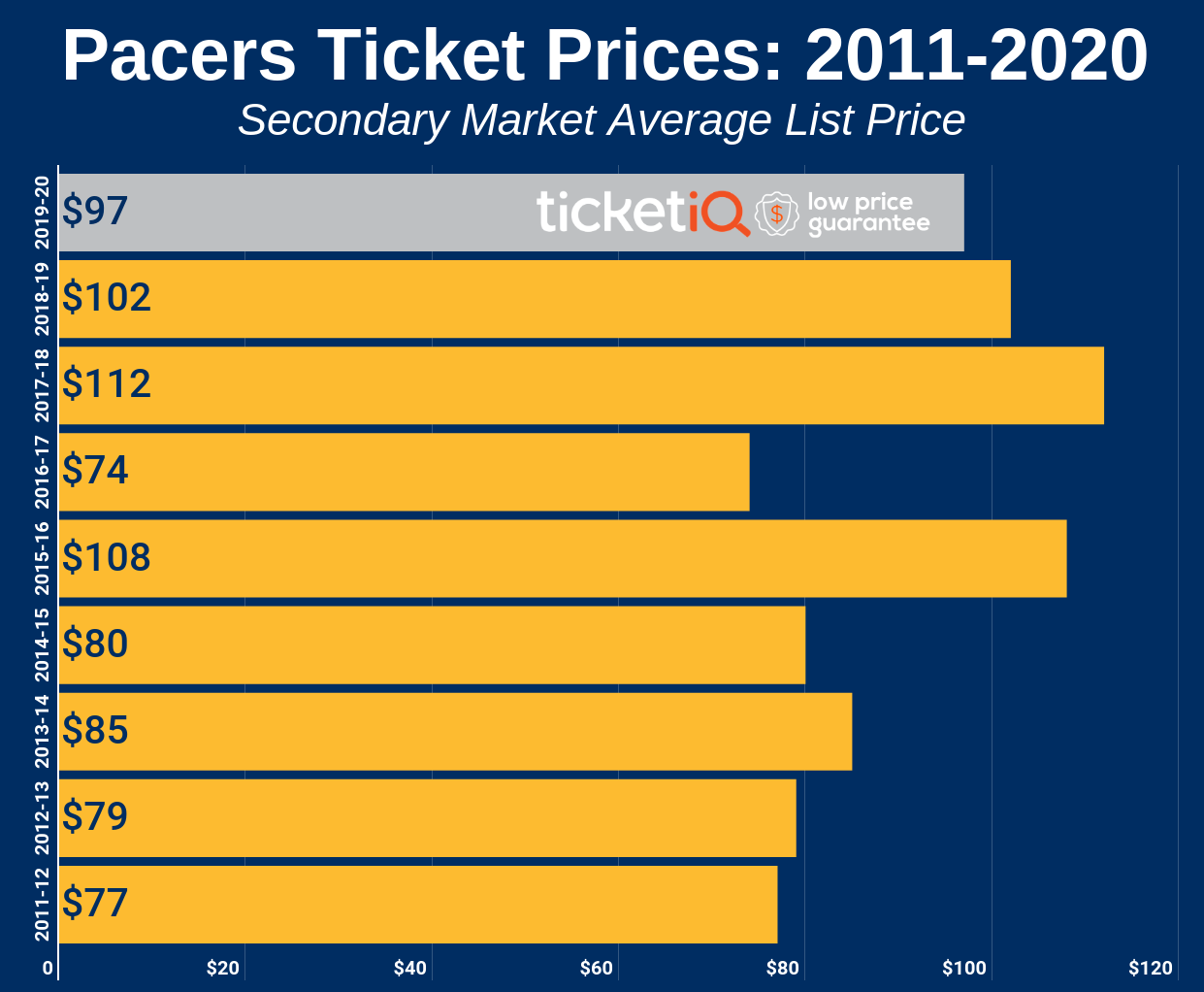 On the secondary market, the cheapest ticket for seven Pacers home games is $15 or less. The priciest game will cost fans $273 on December 17 against the Los Angeles Lakers. The only team that has two slots on the Top 10 priciest games list is the Boston Celtics, for whom the average is $137 on December 11 and $133 on March 10.

Where Are Season Tickets and Partial Plans at Bankers Life FieldHouse

Fans can buy full- or half-season packages or a 10-game plan. Season tickets start as low as $688 for seats in the upper deck, and fans can choose seats anywhere in the stadium, though floor seats on the sidelines are already sold out. Lower-bowl seats in the 100 sections on the corners and behind the basket starting as low at $7,224. Cheaper tickets are available in the higher sections.

Half-season packages start at $357. Full- and half-season ticket holders get priority access to playoff tickets, 25% off at the Pacers Team Store, and other benefits.

For the 10-season plan, there are still plenty of options, with all sections in the upper levels still available, as well as some lower-bowl seats behind the baskets and along the sidelines toward the back of the 100 sections. The Pacers also offer a 10-game pack called “Fan’s Choice,” and fans can select the 10 games they want to see, and get the best seat for each game. Packages start at $220. Fan’s Choice Packages are not available for floor seats along the sidelines, and sections in the lower bowl on the corners and behind the baskets are already sold out.

Where Are Club Seats at Bankers Life FieldHouse

The Pacers offer fans buying seats in Rows 1&2 or Courtside Seats access to the LightBound Courtside Club for food-and-beverage service. The Club serves meals before the game.

The main Club Level at Bankers Life FieldHouse is the Kreig DeVault Club Level, located  above the 100 level. Seats in the this area come with in-seat wait service as well as wider, plusher seats with extra legroom.

Bankers Life FieldHouse also has Theater and Loge Boxes that include access to an exclusive lounge limited to 104 members. The Theater Boxes are four-person mini suites high above the action with clear sightlines, while the Loge Boxes are open boxes that seat four and include a countertop and mobile executive chairs. Both come with access the Lexus Lounge and two parking passes.

Fans can enter events at Bankers Life Fieldhouse with mobile tickets. The mobile ticket will be displayed on the fan's phone to get into the event. Tickets will not be emailed or available to print. Fans can access their tickets using the  Ticketmaster App, which they can download in the App Store or Google Play.

Top 10 Most Expensive Pacers Games On The Secondary Market