With the signing of Kawhi Leonard and Paul George, Clippers Fan are ready for a deep run. . Full-season tickets are sold out, but fans can join the waitlist buy purchasing a 10-game plan. There are two half-season options, the Red and the Blue Plan. However the Red Plan is sold out. The Blue Plan includes games against the Los Angeles Lakers, Golden State Warriors, Toronto Raptors and Philadelphia 76ers. There are also four 10-game plans available.  Single-game tickets and partial plans are available through primary market partner AXS.
Staples Center also offers premium seating, including suites, clubs and lounges, and premier seating for Clippers games. Among the offerings are private suites, as well as the Lexus Club, which is a members-only, high-end dining experience, and the San Manuel Club, which is an exclusive restaurant for suite, premiere seat and premier table and lounge ticket holders,  within Staples Center.
On the secondary market TicketIQ has Low Price Guarantees on Los Angeles Clippers tickets for all games on the 2019-20 schedule, in addition to Low Price Guarantees on all NBA tickets. That means that if you find a secondary market ticket for less on a site like StubHub or SeatGeek, we’ll give you 200% of the difference in ticket credit. TicketIQ customers save an average of 5%-20% compared to StubHub and SeatGeek.

How Much Are 2019-20 Los Angeles Clippers Tickets

On the primary market, there are several partial plans. There are two half-season options, thought the Red Plan is sold out. The Blue Plan is nearly sold out on AXS, with seats available only in Section 110 for $5,148.
The four 10-game packages available all guarantee fans a seat in the lower level. Fans who purchase a 10-game package are automatically added to the season-ticket waiting list. All four 10-game plans start at $370 for a seat in the 300 sections.
Primary market single game tickets start between $13 and $23 for lower demand games. While higher demand games, like match ups against the Rockets, Warriors, Celtics, Bucks and 76ers start between $39 and $60. The most sought after tickets for the season are their games against the Lakers. The primary market get-in price for those start at $240-$250 per ticket.
On the secondary market the average asking price for a Los Angeles Clippers ticket is nearly doubled since last season, going from $143 to $267, making it one of the top five priciest across the league. That average still doesn't touch the league-high $473 for a Los Angeles Lakers home game. 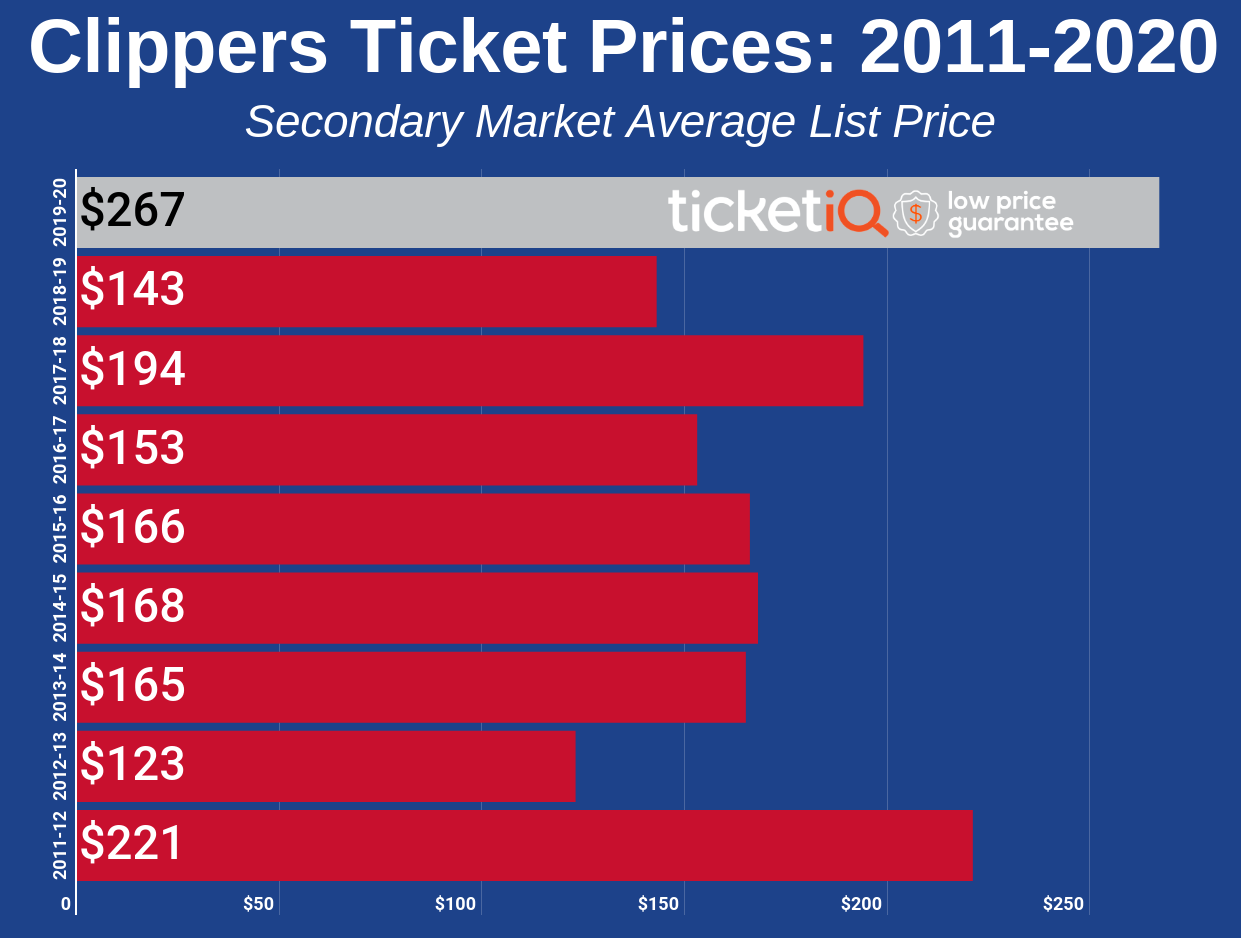 Three Clippers games this season will cost fans more than $600 on the secondary market, and the dates against the Lakers on March 8 and October 22 are trending at $828 and $771, respectively.
The average asking price is the highest in a decade and comes on the heels of a 48-win season -- and an offseason during which L.A. added Kawhi Leonard and Paul George. The Clippers took Golden State to six games in the first round of the playoffs before losing.
Below is a look at the 10 games with the highest average asking price on the secondary market.

After failing to make the playoffs, DeAndre Jordan leaving for Dallas, and the Los Angeles Lakers signing LeBron James, it was a rough summer for the Los Angeles Clippers. Put those pieces together and it's not too surprising to see Clippers ticket prices on the secondary market fall 29% from last season. Below is how Clippers ticket prices stack up on the secondary market this decade. Clippers tickets are the second cheapest since 2011, when TicketIQ.com began tracking data. The most expensive ticket of the decade was $221in 2011-12, when the Clippers finished second in the Pacific Division, and the cheapest was $123 the following season, when they went on to win the division. 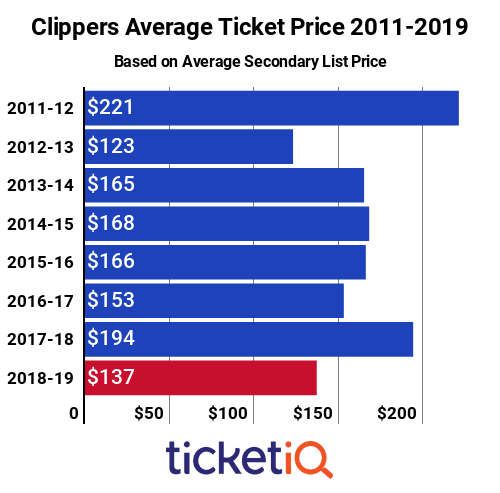 Where to Buy Clippers Tickets:

The Clippers $137 average asking price ranks No. 18 in the NBA, down from No. 9 with a $194 average last season. The Golden State Warriors are ranked No. 1, with a $463 average asking price. Clippers season tickets are available through the team website, and season-ticket holders get access to exclusive team events and priority access to postseason tickets. Single-game tickets are available for most games through the Clippers primary market partner AXS, while the team directs fans to VividSeats for resale tickets. In addition, secondary ticket marketplace TicketIQ.com has seats available for all games. On the primary market, seats for the November 12 Golden State Warriors game start at $100 while TicketIQ.com has floor seats available starting at $497.

Four of the five most expensive Clippers games on the secondary market involve other California teams -- namely, the Lakers and Warriors. While the Lakers and Clippers have long had a cross-town rivalry, Clippers fans are likely driving up prices at Staples Center for the chance to see LeBron James in purple and gold. The priciest ticket of the season is $376 for the January 31 Lakers game, followed by $364 for the April 5 Lakers game. The next two most expensive are $356 for the January 18 Warriors game and $324 for the November 12 Warriors game. No. 5 on the list is $217, when the Boston Celtics come to town on March 11.

Should the young Clippers put together a competitive season, ticket prices for any of the above games could rise. TicketIQ.com can get fans into Staples Center, with tickets to see LeBron and the Lakers starting at $112 on January 31 and $94 on April 5. Both sets of tickets come with the company's Low Price Guarantee. 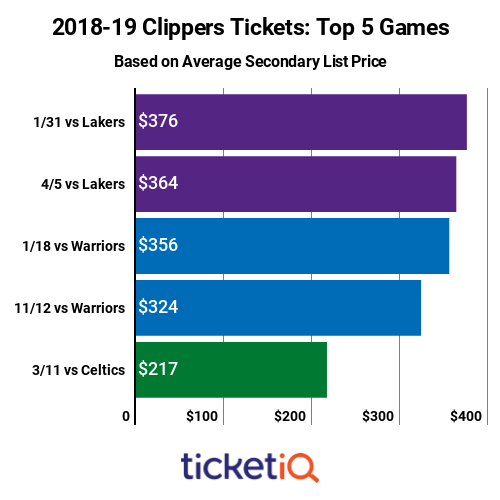