Single-game tickets and season tickets on the primary market for Los Angeles Lakers games are sold out, according to Ticketmaster.

For fans seeking seats, the secondary market is the only option and TicketIQ has Low Price Guarantees on NBA tickets. That means that if you find a secondary market ticket for less on a site like StubHub or SeatGeek, we’ll give you 200% of the difference in ticket credit. TicketIQ customers save an average of 5%-20% compared to StubHub and SeatGeek. Below is a seating chart for an typical middle of the road demand game including ticket prices by zone. 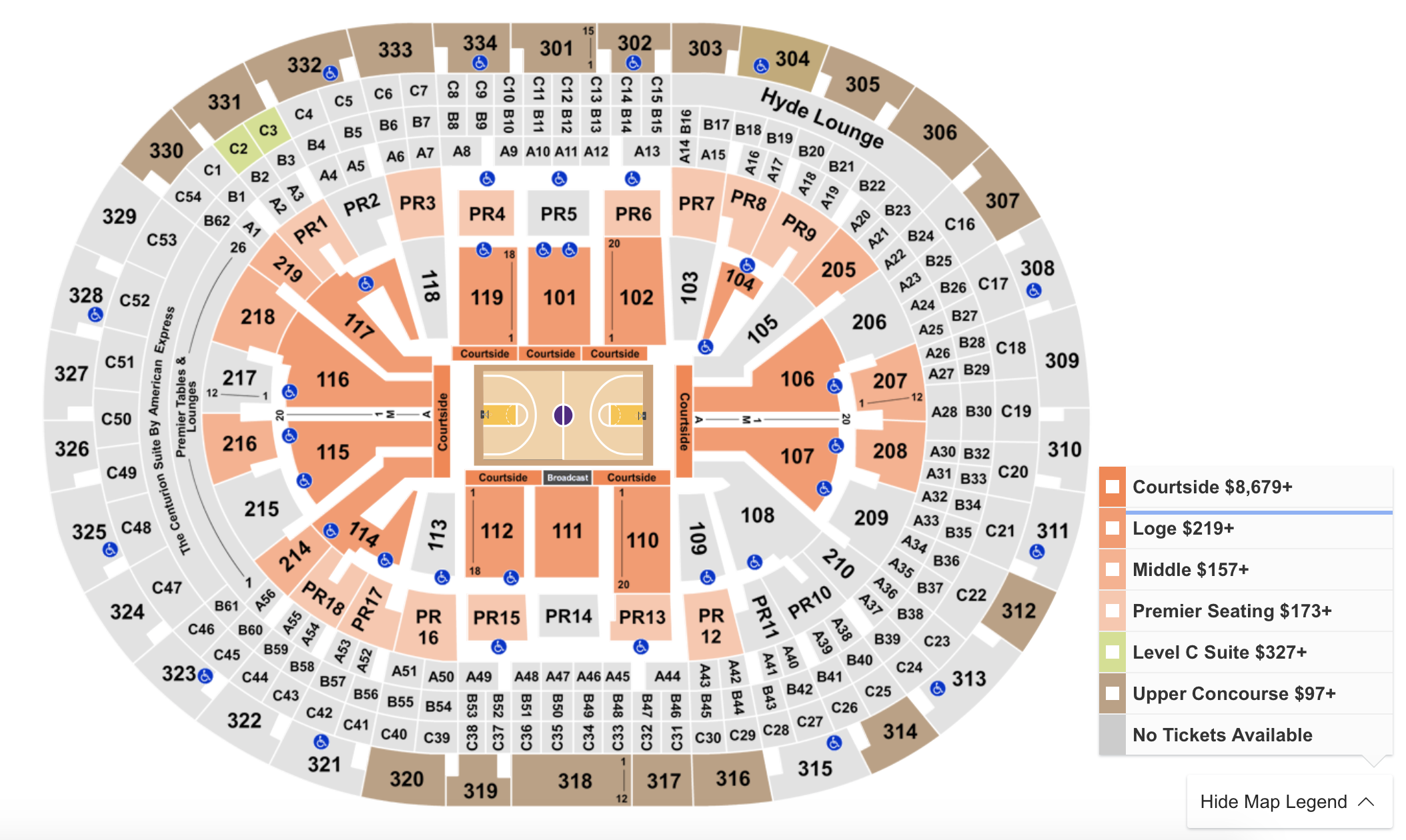 How Much Are Los Angeles Lakers Tickets

On the secondary market, the average asking price for a Los Angeles Lakers home game is $473 – the highest in the league, and the highest of the decade for a home Lakers game at Staples Center. The next priciest ticket is $442 for a Golden State Warriors home game. 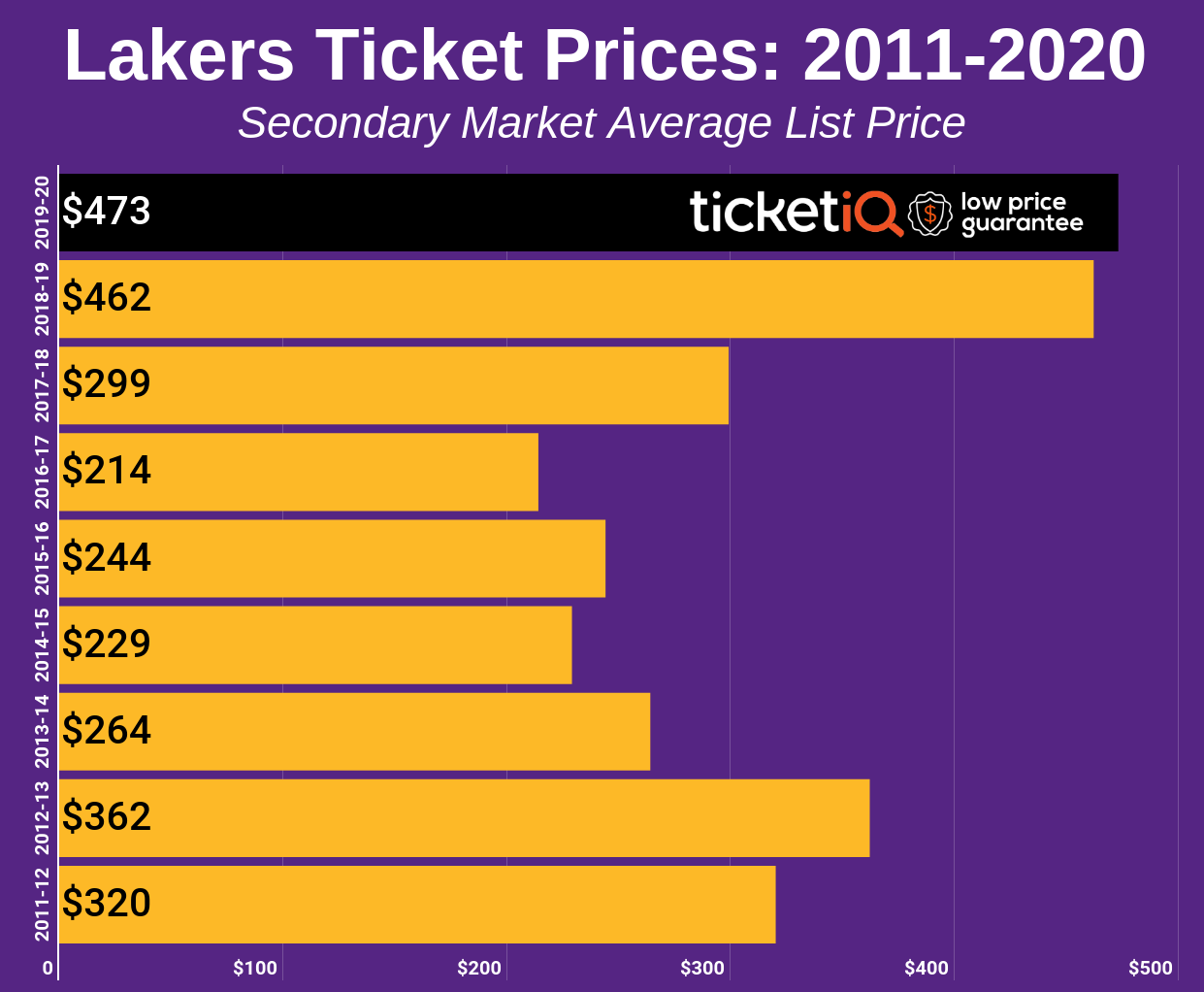 Season tickets and any other Lakers ticket plans are sold out. Fans on the waitlist could be contacted by the team in September 2019 and offered seats. If no seats are available, or if seats are declined, the deposit moves forward for the 2020-21 season.

Season ticket holders have access to special events at Staples Center, the option to upgrade their seats on the day of the game is better seats are available, and have access to exclusive season ticket-holder social media accounts.

Where Are Club Seats At Staples Center

Premier Seats, which are on the same level as the 200 sections, on the Lakers side of the arena, are also available. In addition, Staples Center has Event Suites, where fans can rent a private space for between 12-132 people, either for a single game or for the season. Suites are located between the 200- and 300-level sections.

Entry into Staples Center is by mobile ticket only, and fans can download the Lakers Mobile App to access and manage their tickets. The team provides detailed instructions on how to download the app, as well as a FAQ section.

The Top 10 Most Expensive On The Lakers Schedule

If there was ever any question that demand follows LeBron James, it’s been answered. On Sunday, the King agreed to a 4-year, $154 million deal with the Los Angeles Lakers and already, has one of the highest average asking prices of the last decade.

James, a 14-time all-star including this past season, has brought at least one NBA title to each of his former teams – the Cleveland Cavaliers (2016) and Miami Heat (2012, 2013). He’s also taken the Cavs to the last four consecutive NBA Finals. Los Angeles, which has been rebuilding since before Kobe Bryant’s 2016 retirement, can only hope James will be able to revive the Lakers 1980s glory days, when they won five league championships.

According to TicketIQ.com, the average asking price on the secondary market for James’ first Staples Center appearance is $1,761, making it the fourth priciest game since 2010 and the most expensive home opener of the decade. That average asking price sits behind $2,003 for Kobe Bryant’s final home game on April 3, 2016, $1,912 for Game 6 of the NBA Finals and $1,811 for Game 7 of the NBA Finals.

According to TicketIQ, because the date and opponent for James’ regular-season home opener have not yet been set, current secondary market inventory is speculative and is based on tickets listed by season-ticket holders.

James will play his first game at Staples Center on Oct. 2, a preseason match-up against the Denver Nuggets. That game currently has a $447 average asking price on the secondary market and a $115 get-in price. To put those numbers into perspective, last year’s average asking price for a preseason game at Staples Center was $141 with a get-in price of $21. The previous high for a Lakers preseason game was $208.

In the preseason, the Lakers will play across California and the West, including games in San Diego and Las Vegas. James’ first two games at Staples Center (the Nuggets game and an Oct. 4 game against Sacramento) have listed get-in of $257 and $232 and carry TicketIQ.com’s Low Price Guarantee. The company has tickets available to other preseason games, including in San Diego on Sept. 30, for as little as $90 and at T-Mobile Arena in Las Vegas for as little as $93.