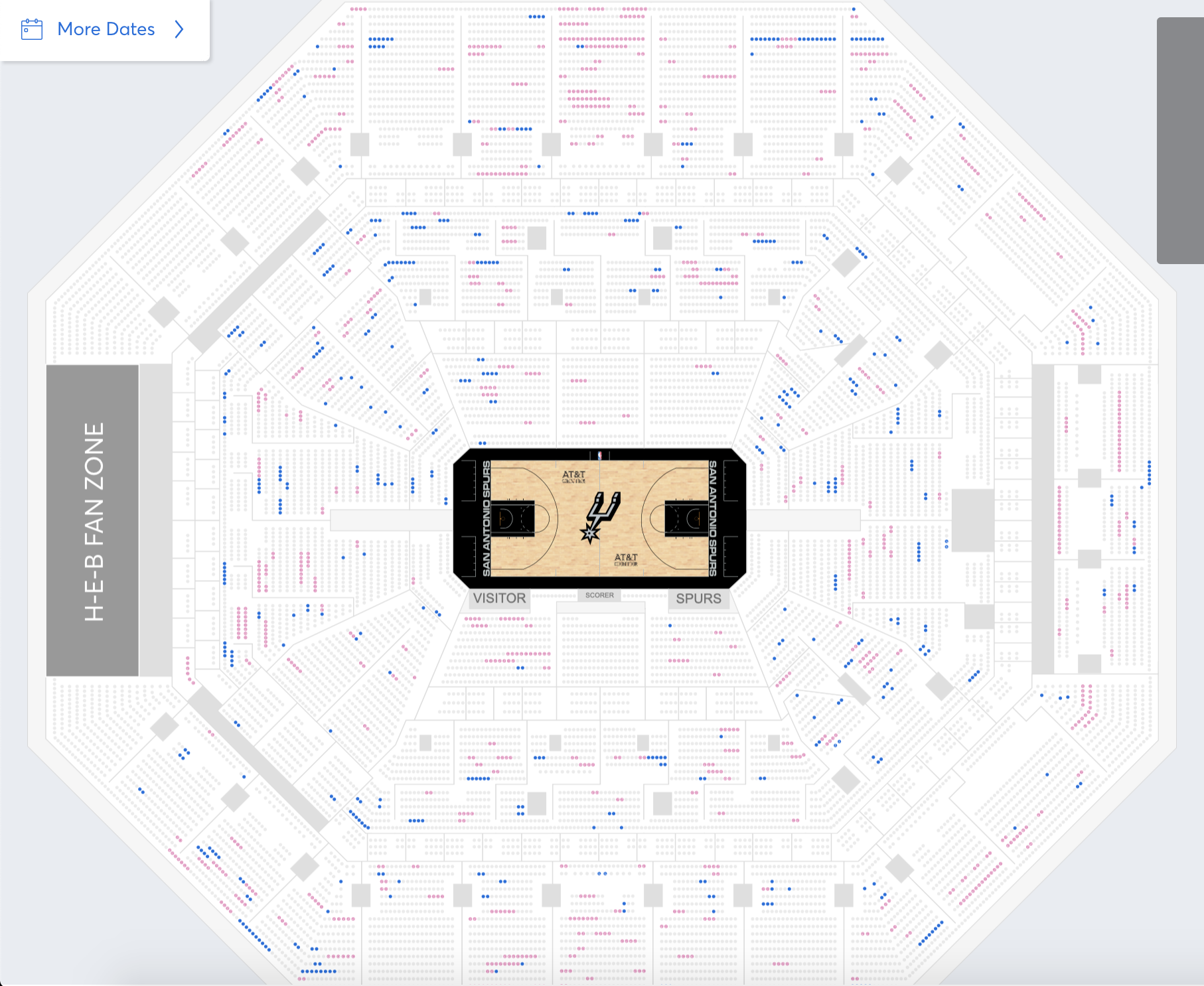 Fans can also find seats on the secondary market, and TicketIQ has Low Price Guarantees on sold out . That means that if you find a secondary market ticket for less on a site like StubHub or Vividseats, we’ll give you 200% of the difference in ticket credit. TicketIQ customers save an average of 5%-20% compared to StubHub and Vividseats. Below is a seating chart for a typical middle of the road demand game including ticket prices by zone. 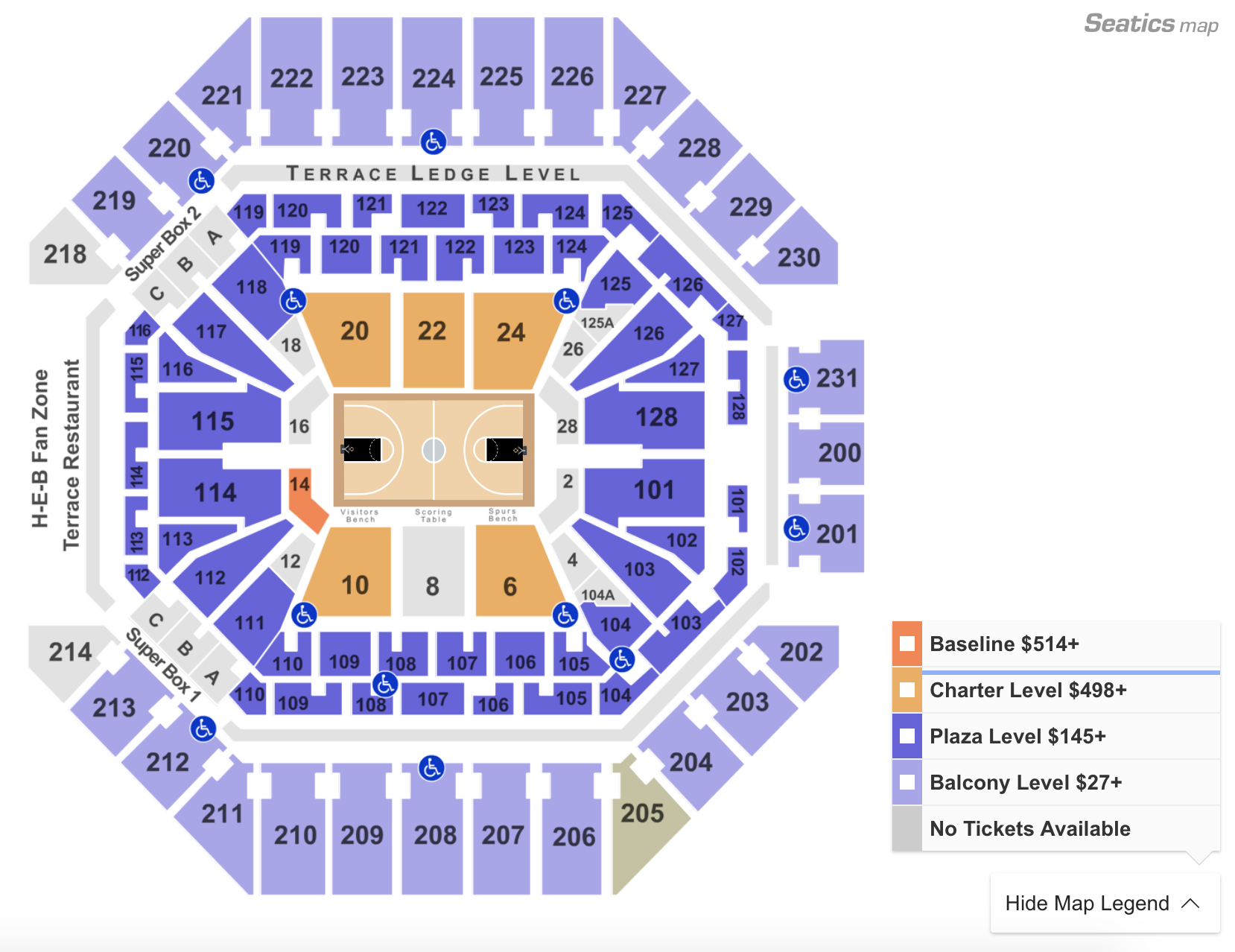 The current average asking price for a San Antonio Spurs home game is $177 on the secondary market, down 10% from last season. The Spurs rank No. 8 in terms of average price across the NBA – the teams with the highest averages are the Los Angeles Lakers at $473 and the Golden State Warriors at $458. 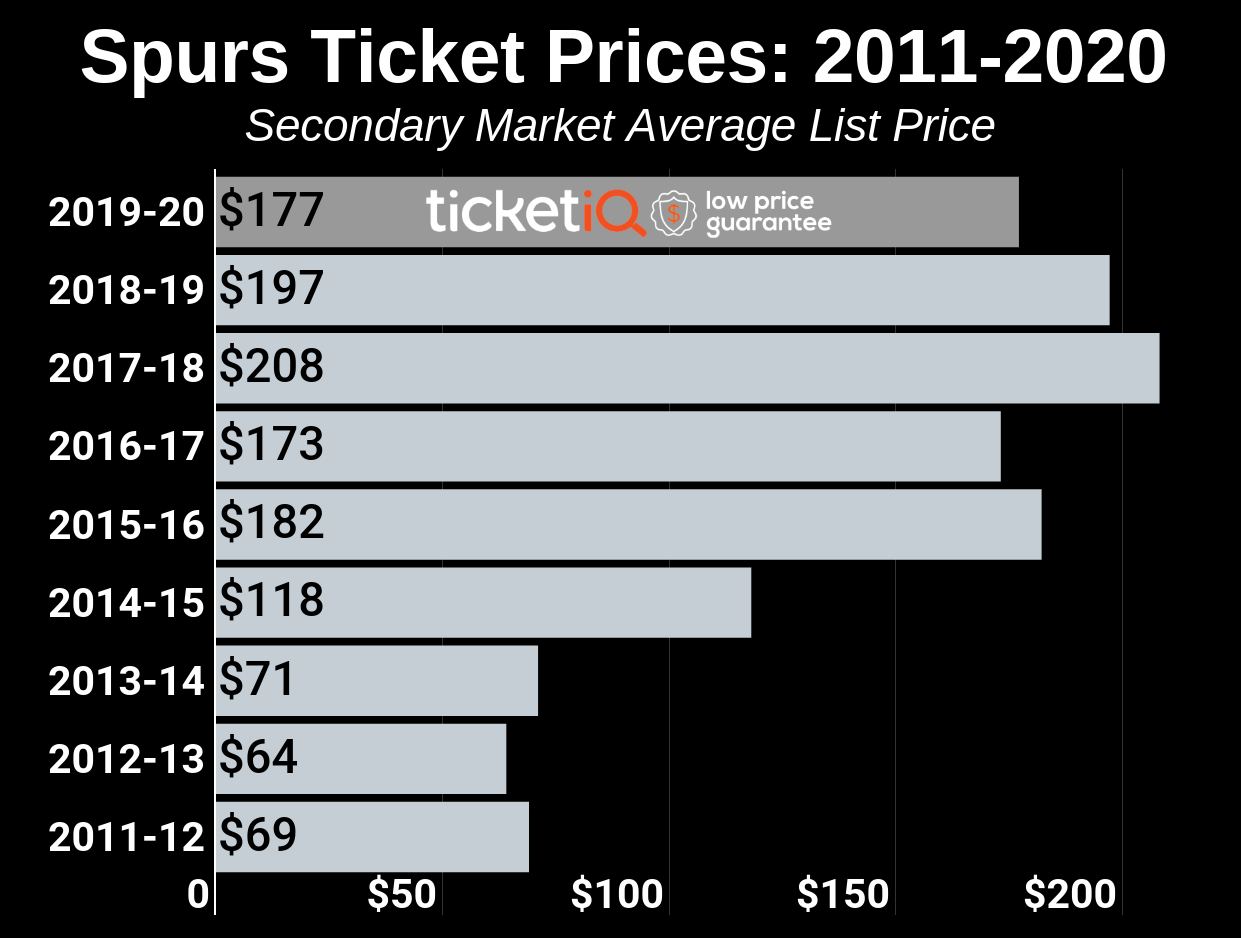 The average asking price is the fourth highest of the decade. Spurs tickets peaked at a $208 average in 2017-18, a year after advancing to the Western Conference Finals. Since then, they have been on a downward trend.

The highest-demand game of the season is the November 11 meeting with Memphis when the Spurs will retire Tony Parker’s jersey. The cheapest seat on the primary market is $80 while a seat in Section 8, Row 12 at midcourt close to the action is $750. On the secondary market, fans can get into AT&T Center for $91 and though Section 8 is sold out, there are seats across the arena in Section 22, Row 4 at midcourt for $1,528.

The least expensive game of the season looks to be against the Cleveland Cavaliers on December 12, and the cheapest seat on the primary market is $18 in the 200 Sections. Seats behind the Spurs bench in Section 6 are still available for $355. Fans can get into this game for less on the secondary market, as TicketIQ has seats starting at $11 in the 200 sections. Fans can get closer to the action in Section 6 for $432 or in Section 22 at midcourt for $436.

Where Are Spurs Season Tickets And Mini Plan Options?

Fans can select seats anywhere in AT&T Arena for season tickets or mini plans. A full-season plan includes 44 games, a half-season plan includes 22 games and the Weekend Plan and Texas Showdown Plan both include 10 games. Fans can information directly from the Spurs about season-ticket plans.

Where Are Club Seats At AT&T Arena?

The Spurs offer Club Seating in Rows 1-3 and Rows 4-9 in several 100-Level sections. These seats are the closest fans can get to the court and include access to Saddles and Spurs areas. Tickets for Rows 1-3 also include access to the Courtside Club. All club seating includes invitations to members-only events, early entry through a VIP entrance, and premium food and beverage.

San Antonio and AT&T Arena offer mobile ticketing via the Spurs App, which is available to download at the App Store or Google Play. With the app, fans can access and manage tickets, transfer or sell tickets, and gain access to the arena. The Spurs moved to mobile tickets only for this season.

Three of the Top 10 games in terms of price have an average asking price of $306 or more, including games against Golden State, the Los Angeles Lakers and Houston. In fact, both meetings with all three teams at AT&T Arena are in the Top 10. Both Los Angeles Clippers are also among the Top 10.