Where To Buy Washington Wizards Tickets

Single-game tickets, season plans, half-season plans and partial plans are available on the primary market for Washington Wizards. Fans can get information about ticket plans via the team website, and single-game tickets are available via primary partner Ticketmaster. Below is a seating chart for an typical middle of the road demand game with unsold face value inventory. 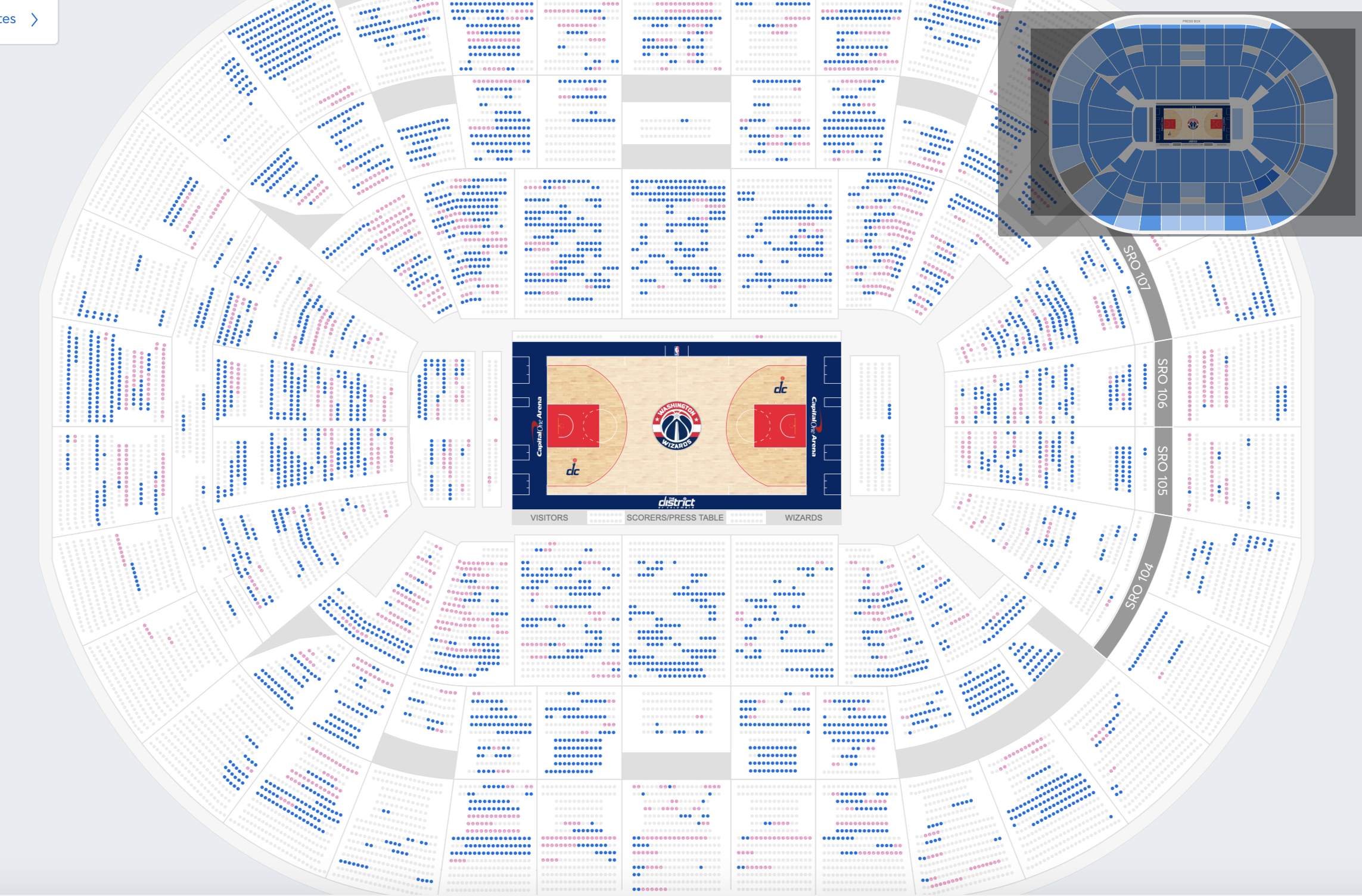 Fans can also find seats on the secondary market, and TicketIQ has Low Price Guarantees on sold out . That means that if you find a secondary market ticket for less on a site like StubHub or Vividseats, we’ll give you 200% of the difference in ticket credit. TicketIQ customers save an average of 5%-20% compared to StubHub and Vividseats. Below is a seating chart for an typical middle of the road demand game including ticket prices by zone. 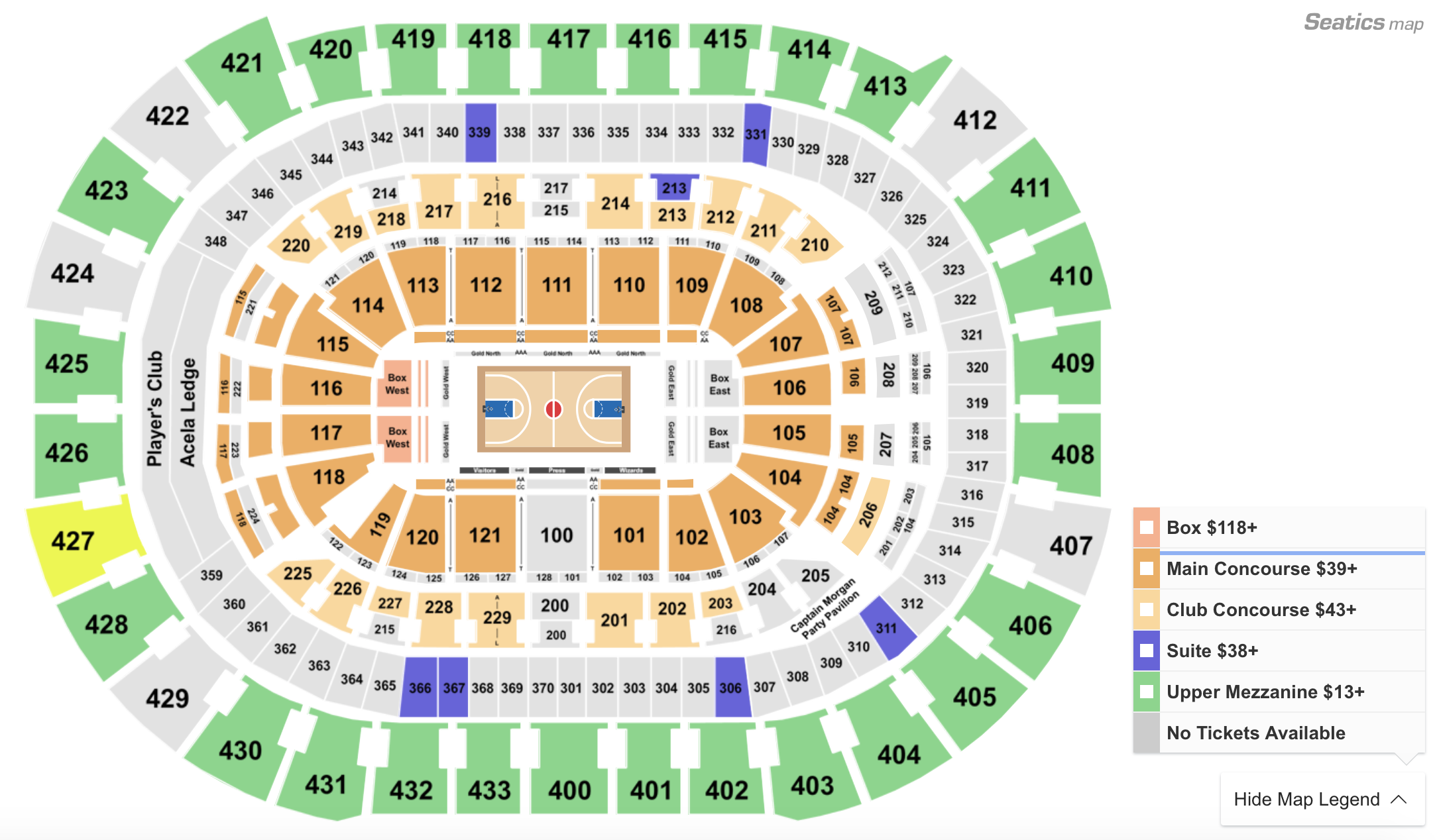 How Much Are Washington Wizards Tickets

On the secondary market, the average asking price for a Washington Wizards ticket is $92, down nearly 32% from last season. The average asking price ranks the Wizards No. 23 in the NBA and is the seventh cheapest of the decade. The priciest was $134 in 2011-12. The priciest average across the league is $473 for a Los Angeles Lakers home game while the cheapest is $58 for a Minnesota Timberwolves home game. 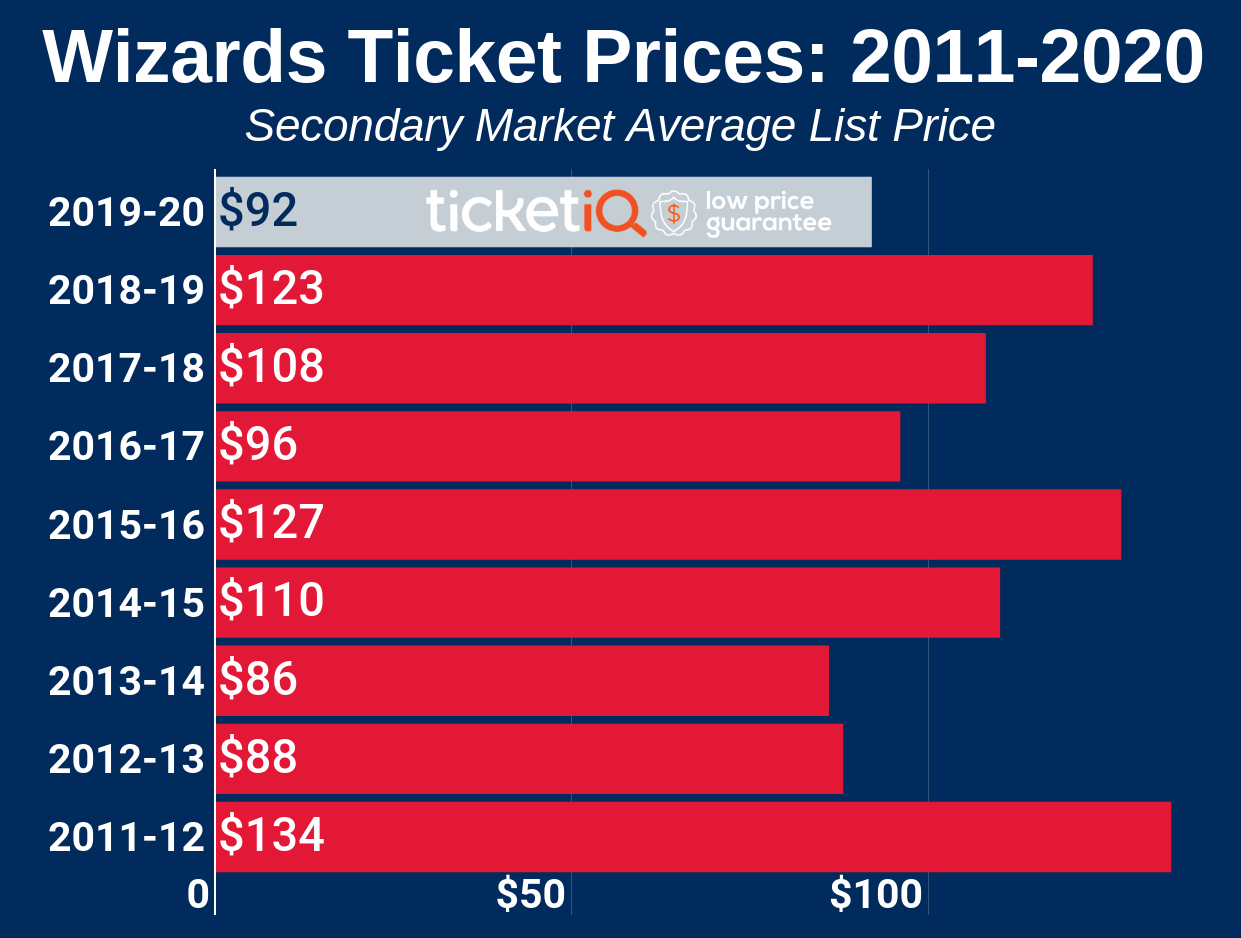 On the primary market, there are plenty of tickets available for most games, and for lower-interest games, fans can get in for less than $25. As an example, seats in the 400 Sections for the November 22 game against Charlotte start at $21 or fans can treat themselves to seat a midcourt in Section 100, Row A behind the scorers table for $270. For that same game, secondary market tickets start at $12 in the 400 sections, and the best available seat in Section 100 is in Row D for $221.

At the other end of the spectrum, the January 6 Boston Celtics game is among the higher-interest games, and 400-Level seats start at $25 while a seat in Row B of Section 100 jumps up to $305 on the primary market.

TicketIQ has seats available for this game on the secondary market, but 400-Level seats start at $37 and the best seat in Section 100 is in Row AA, which is immediately behind the Gold North Section, is priced at $1,052.

Fans can pick season tickets anywhere in the arena, starting with seats that average $16 per game in the 400 Sections to VIP Seats closer to the action that average $230 per game. The All-Star Plan, which includes 13 games against the best teams – Golden State, both Los Angeles teams, Boston and New York among them – also allows fans to select seats anywhere in the arena, starting at $23 per game in the upper levels to $420 per game for VIP Sections.

Where Are Club Seats At Capital One Arena

Club Level at Capital One Arena is the 200 Level, where fans can get access to the Ultra Club. The Club is located behind one of the baskets, and Club Seats ring the 200 level. There are also three Clubs on the 300 Level, the members-only Players Club, the PWC Club and Acela Club, all of which offer premium food and beverage, a lounge-style setting and more.

Fans can download the Wizards App or use the Monumental Sports Account Manager to access digital tickets.The app can be used to buy, sell or transfer tickets, as well as for entry into Capital One Arena. The barcode on the app for your ticket will also have concession credit, if available, as well as indicating access to any premium areas.

The Top 10 Most Expensive Games on the Wizards Schedule

Among the Top 10 most expensive games at Capital One Arena this season are two meetings each with Milwaukee and Brooklyn. The priciest game of the season looks to be March 28 against the Los Angeles Lakers, and it is the only game of the season that will cost fans $250 or more to get in.