TicketIQ connects you directly to professional sellers. That means that not only are you getting the lowest available price, but you're buying NCAA Football tickets that are 100% guaranteed to be authentic.

You'll never be surprised by hidden fees when you buy NCAA Football tickets from TicketIQ. You deserve to know the final price of your tickets right from the get-go.

Where to Buy NCAA Football Tickets

Which NCAA Football Stadiums and Cities Have the Lowest Coronavirus Risk?

How Much are 2020 NCAA Football Tickets?


Where to Buy 2020 College Football Tickets

College football tickets are available for sale on the secondary market.

We’ve analyzed Covid-19 case data along with RT values, which measure the rate of virus transmission, for the NCAA Power 5 conferences. Based on this data, we’ve created a Safety Index which measures the risk fans take when buying tickets for their favorite teams. The Safety Index is not meant as a recommendation to attend events in any market, but just one interpretation of publicly-available data. We’ve broken down our Safety Index into 3 categories. Teams highlighted in Green are the safest. A Yellow rating are low-medium risk. An Orange or Red ratings are the riskiest.  We'll be updating every two weeks to track progress by state.

Below is a breakdown by school and conference. 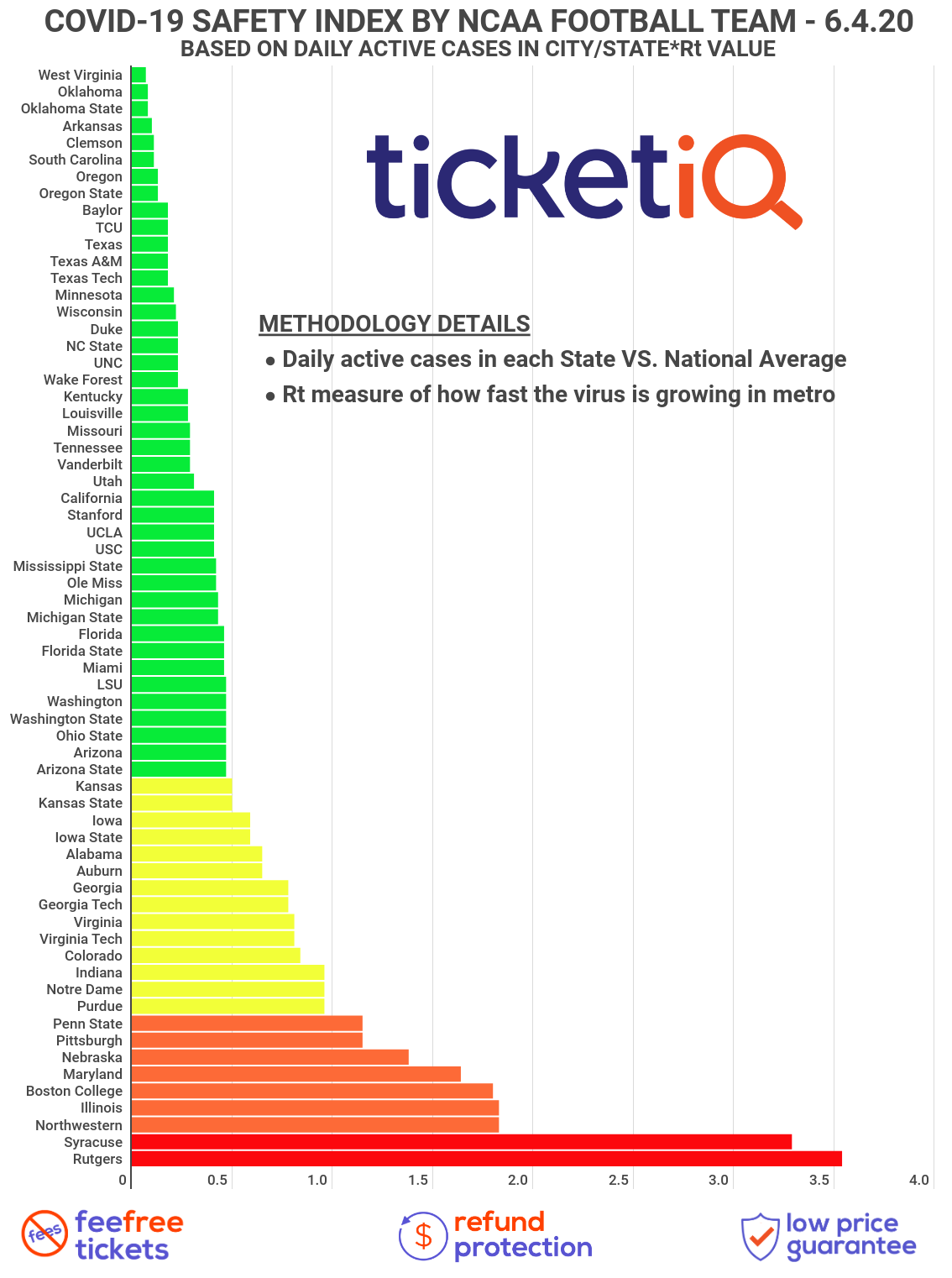 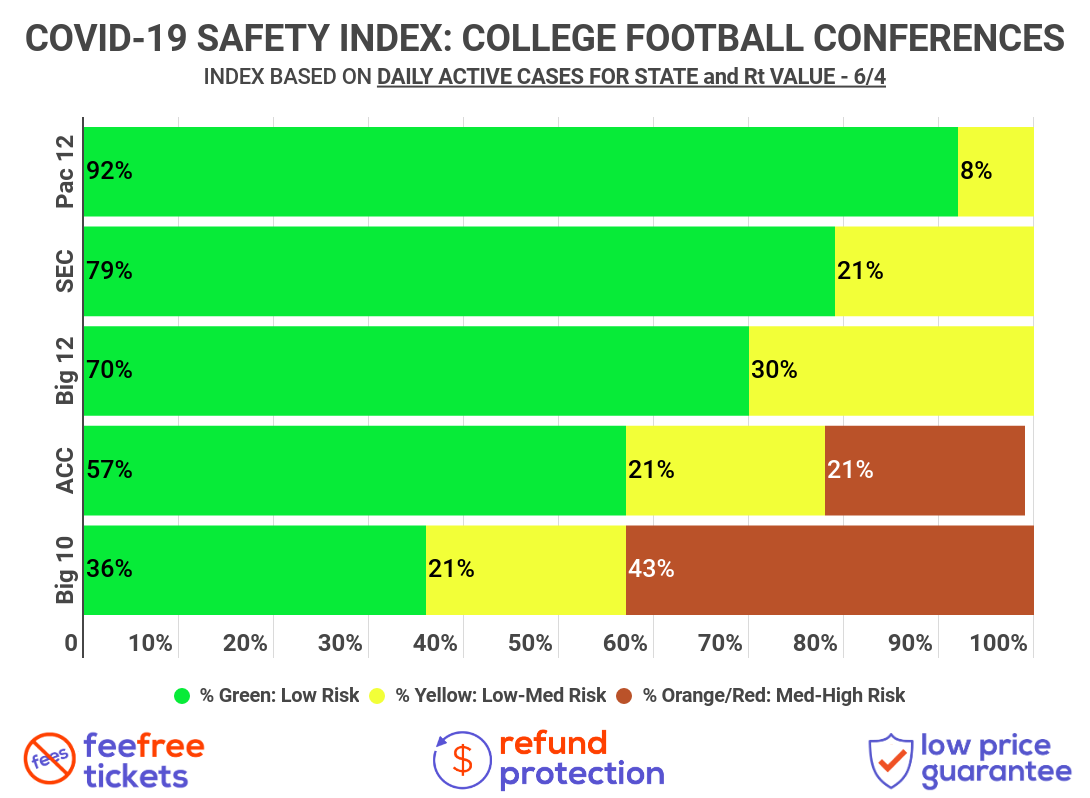 How Much Are 2020 College Football Tickets 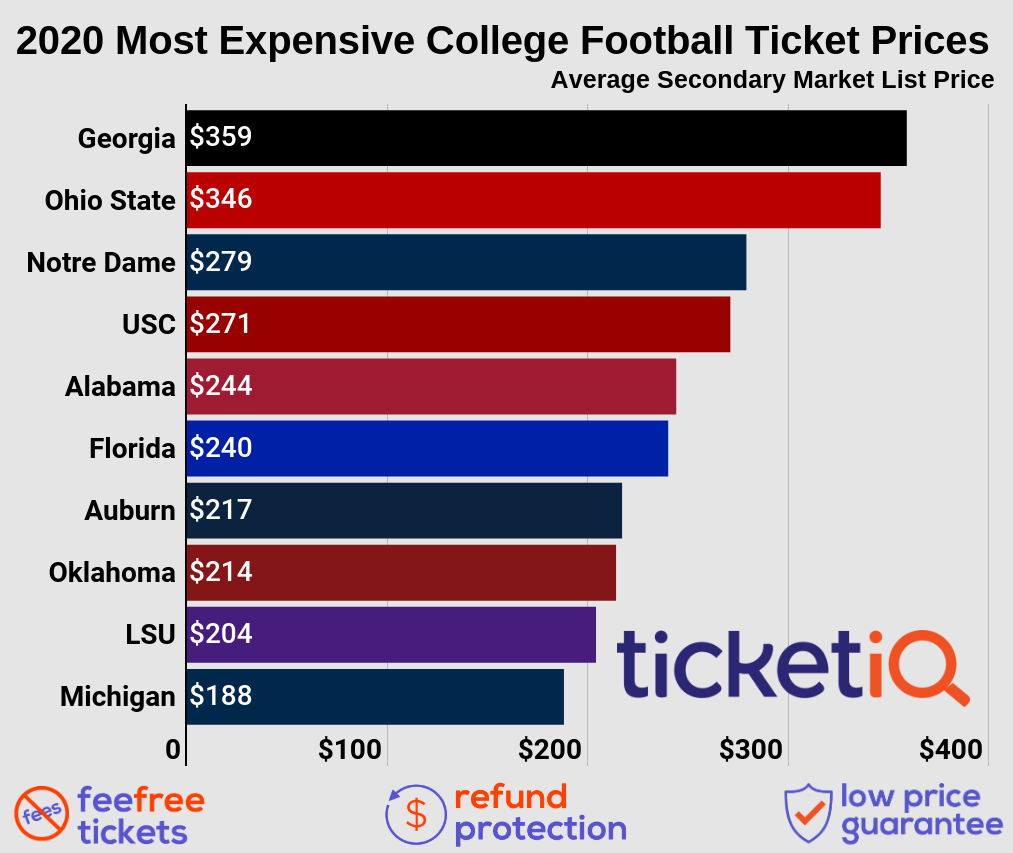 Below is a look at the full top 25 college football teams based on average secondary market listing price and their year over year price changes. 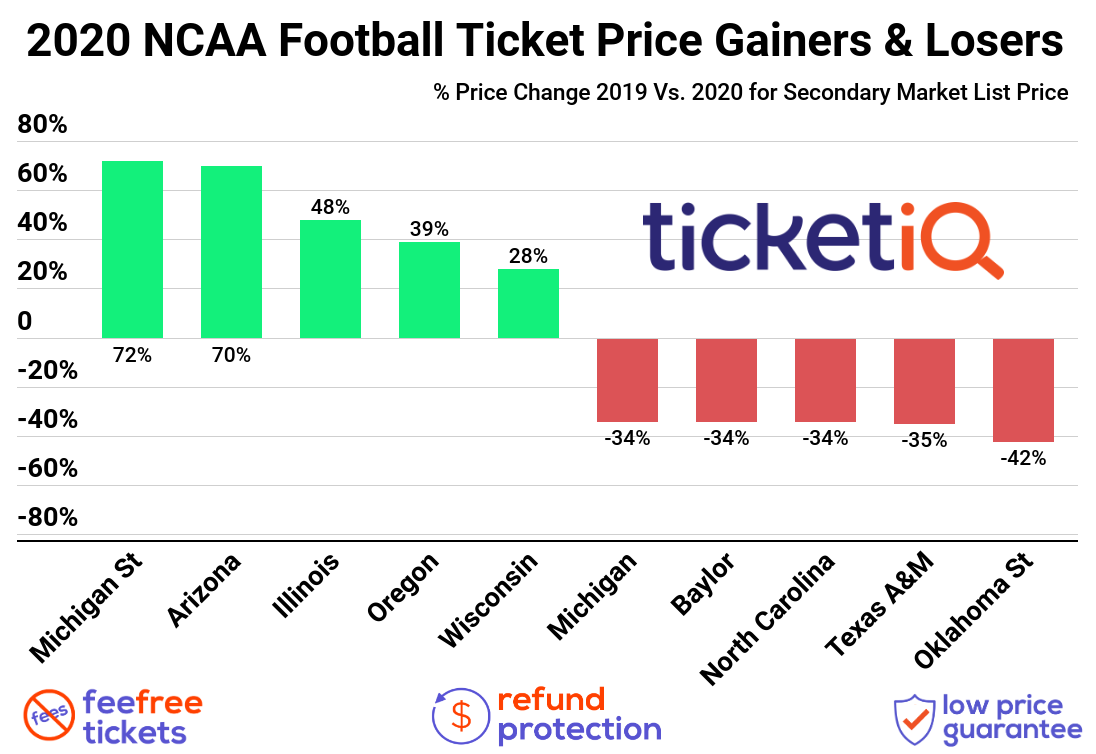 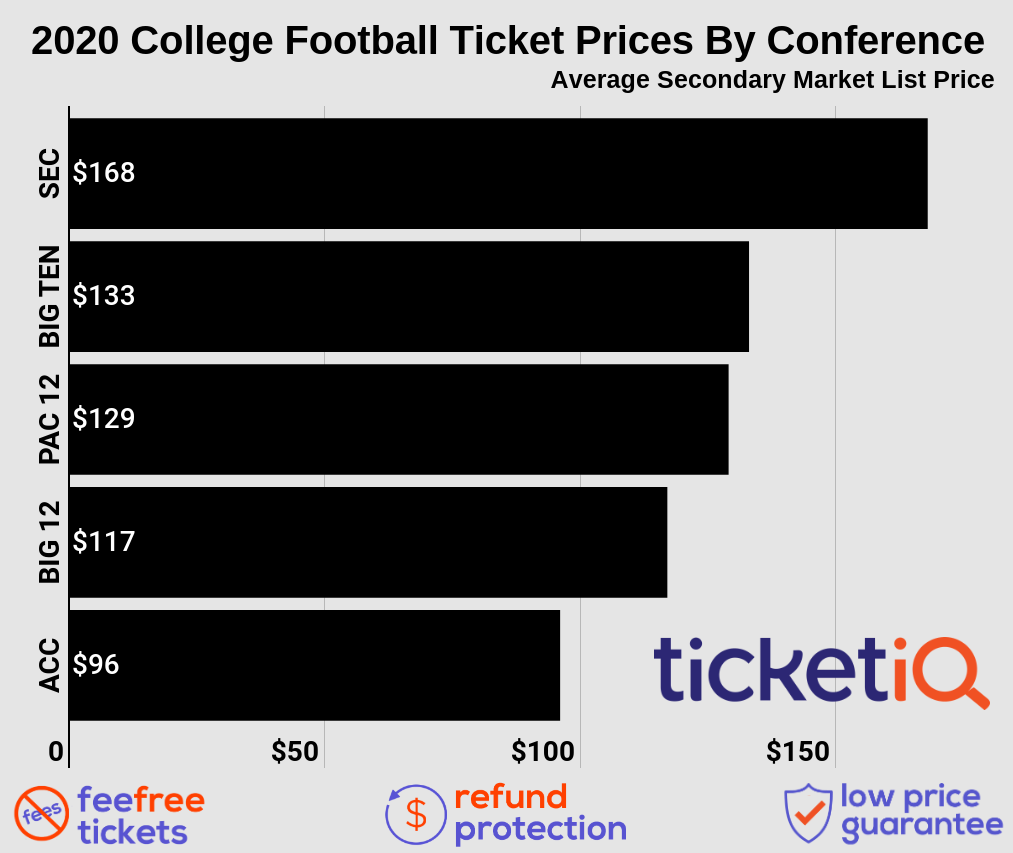 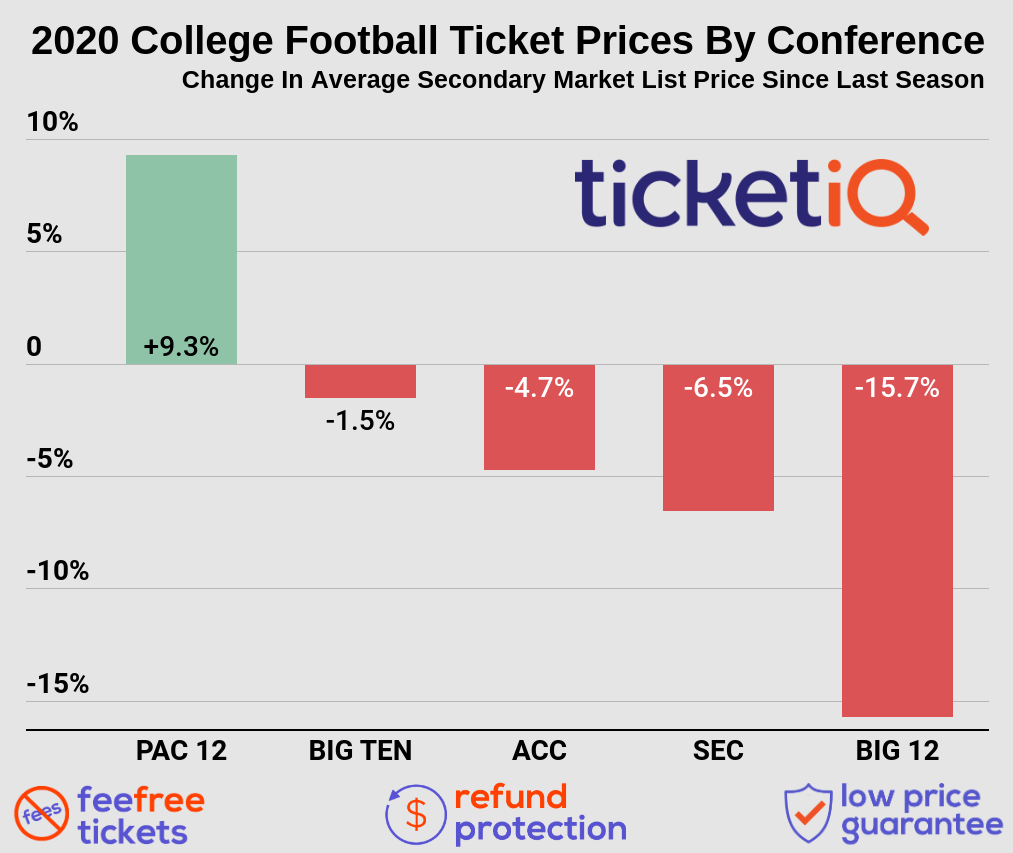 TicketIQ is committed to the cheapest tickets possible, and we make much less on sold out tickets compared to other major marketplaces like StubHub and Vivid. That means ticket buyers save from up to 25% on TicketIQ on sports, music and theater. We're able to do this because we also work with teams, venues, and other ticket owners, to help them sell tickets at face price, directly to consumers like you, through Ticketmaster and Seatgeek.

How Much Are 2019 College Football Tickets

As for prices of college football tickets on the secondary ticket market, for the second consecutive year, Georgia has the most expensive average price, largely as the result of Notre Dame's first-ever visit Athens. The 8th-ranked Bulldogs have an average asking price of $487 for games at Sanford Stadium, which is over $100 more expensive than Ohio State, the team with the second-highest average.

Despite being ranked No. 1 in the nation by USA Today, Clemson has the 11th-most expensive ticket in the nation. Alabama, ranked No. 2, has the fifth-highest average asking price on the secondary market. After Georgia and Ohio State, the the midwest dominates in terms of price, as Michigan and Notre Dame round out the Top 5.

In addition to college football tickets, TicketIQ also has Low Price Guarantees on all sports tickets, which means that if you find a secondary market ticket for less we’ll give you 200% of the difference in ticket credit. TicketIQ customers save an average of 5%-20% compared to Stubhub and Vivid Seats.

Where to buy 2019 College Football Tickets

For the 2019 college football season, there is more diversity in ticket selling strategies for power conference teams than ever before, which it's important to check out not just the secondary market, but also to look for options directly from schools, via Paciolan and Ticketmaster, the two main ticketing platform for college football. These options include more single-game tickets than ever before as well as mini-plans and mobile-only flex packs, which we link to in all of the below team overviews. You can also find a more detailed analysis for most of the top 25 teams below. 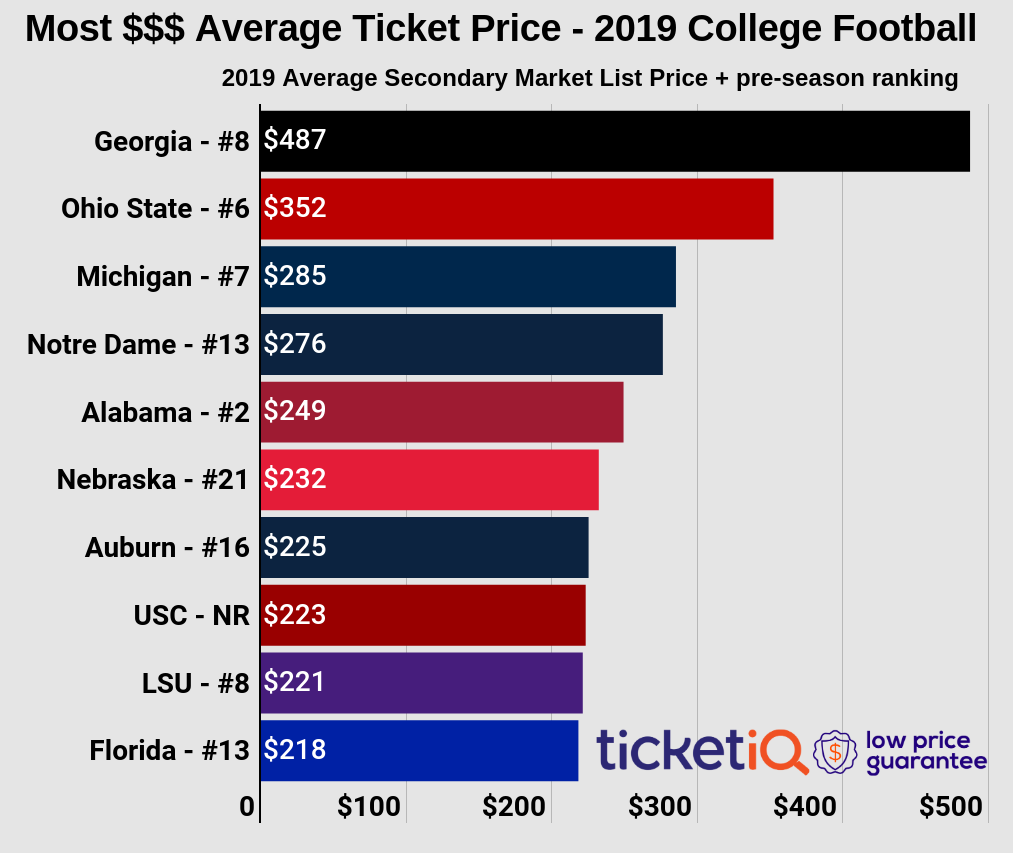 For 2018, UGA Leads Nation As Most Expensive College Football Ticket For First Time

With the kickoff of college football this weekend, the 3-month race for the college football playoffs will be underway.  Based on pre-season rankings, it’s Alabama’s to lose.  While they have the top pre-season ranking, when it comes to ticket prices, they’re only the 7th most expensive home average this season.  At an average price of $323, the 2017 runner-up Georgia Bulldogs have the most expensive college football ticket in the nation. Perhaps the biggest surprise in the top 25 is LSU, which are the fourth most expensive tickets in the country. That’s less the result of their 25th pre-season ranking than it is the fact that both UGA makes their way to death valley for the first time in ten years. That, in addition to an Alabama visit, puts LSU in the top five for the first time since 2011.

Compared to last year, the average price of all top 25 teams in the TicketIQ dropped 15.5%. Whether this is a one year blip are part of the larger cyclical price correct across college sports remains to be seen. The Wall Street Journal did a piece on the growth of unsold college football tickets this week, and it's possible the 2018 drop is correlated to that trend. 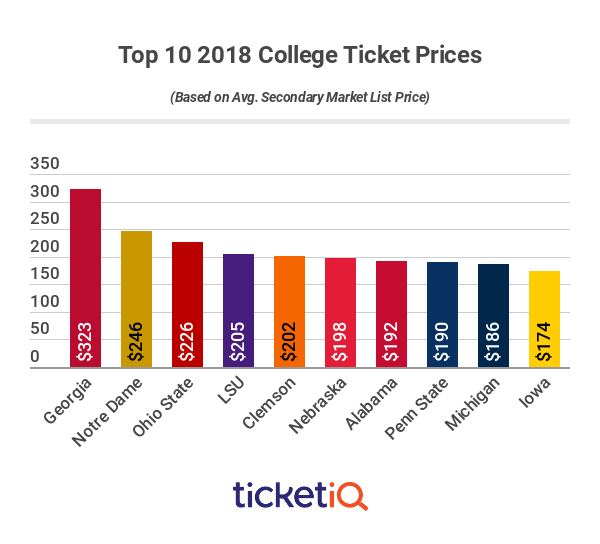 Despite their scandal-ridden offseason, Ohio State football tickets have the third most expensive tickets in the nation at an average price of $226. Prices for Ohio State tickets, however, are down 32%, which marks the fourth-biggest price drop from 2017 for any team, behind Florida State and Tennessee and Alabama, which has prices down 53% compared to last year. Other notable drops this season include Michigan football tickets, which are down 31% after another year of unfulfilled expectations in Ann Arbor under Jim Harbaugh.  While not in the top five, Notre Dame tickets also had a major price drop from 2017, falling 26%. 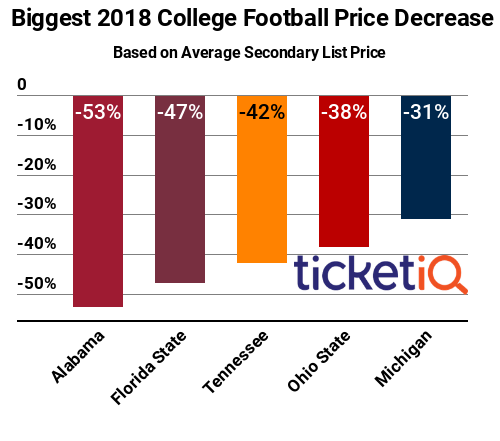 Coming within one play of the national championship last year, Bulldog fans seem to have gotten over the painful loss in Atlanta by driving up ticket prices 25% from last season.   That’s only good for the 4th-largest increase this season, and trails TCU’s 51% increase.  With a pre-season ranking of 16th in the nation, TCU fans are excited about their prospects, and are being helped by Oklahoma’s October 20th visit, which is the most expensive game of the season.  While Nebraska isn’t showing up in the pre-season rankings, they do have the third-highest price increase compared to last year, largely as the result of new coach Scott Frost, who led UCF to a perfect season last year. That increase is good to move them Nebraska Football tickets the the 6th  most expensive in the country this season. 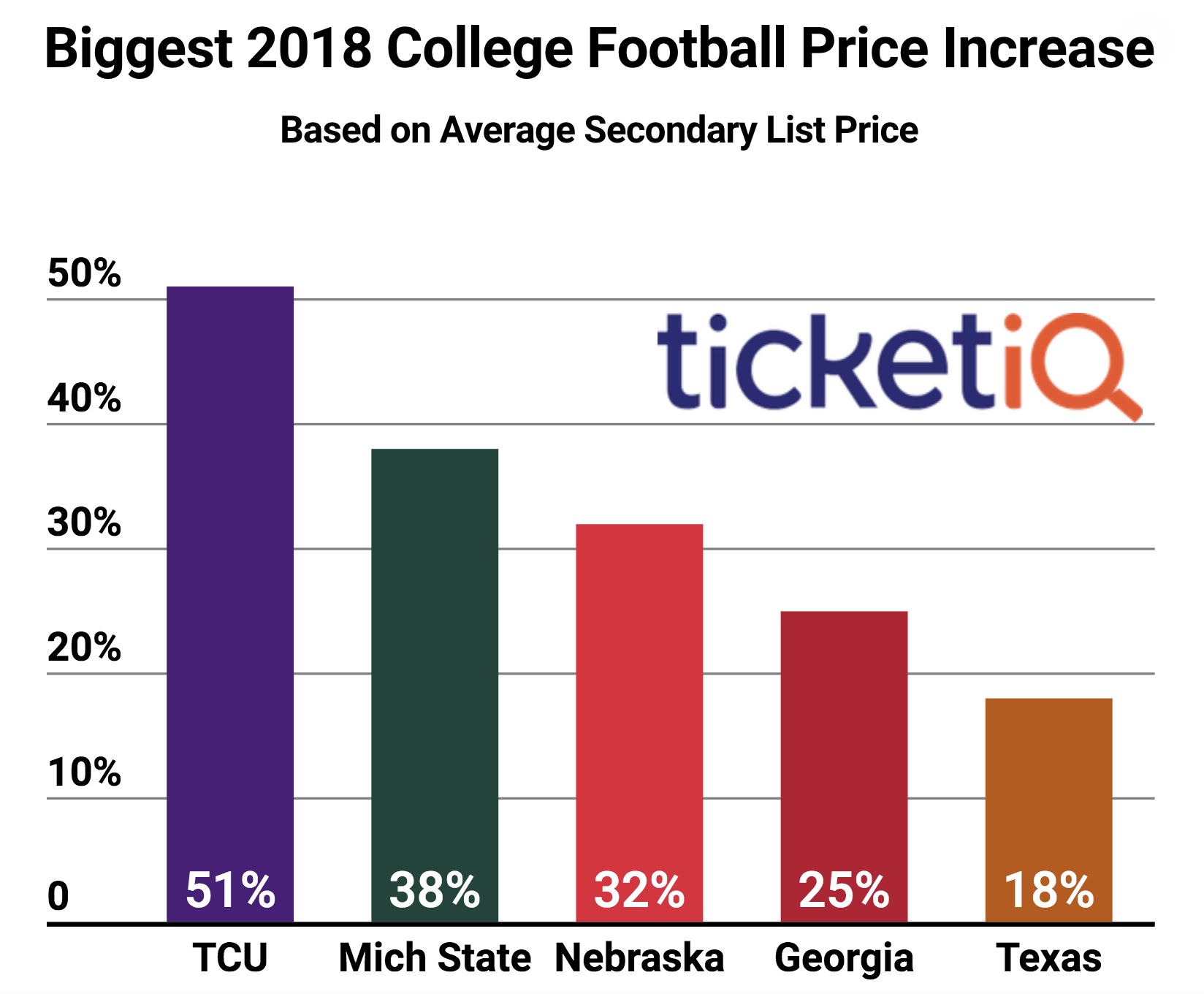 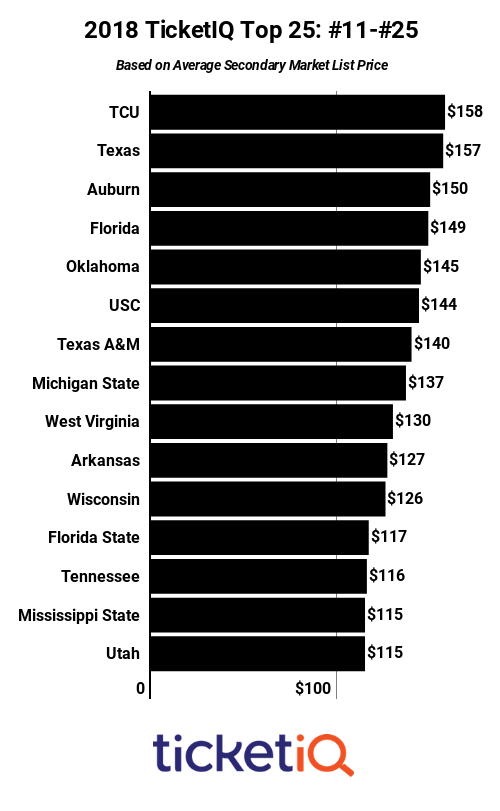