Where To Buy 2020 Arizona Cardinals Tickets

Arizona Cardinals tickets are available for sale on the secondary market as of the 2020 NFL schedule release.

For more detailed data on 2020 Cardinals tickets, register for updates.

How Much Are Arizona Cardinals Tickets

A ticket to see the Arizona Cardinals is up more than 108% over last season, but remains one of the cheapest in the NFL. The $231 average asking on the secondary market price ranks No. 28 in the NFL. The cheapest ticket is $142 to see the Detroit Lions and the priciest is $1,089 to see the Raiders for their first season in Las Vegas. 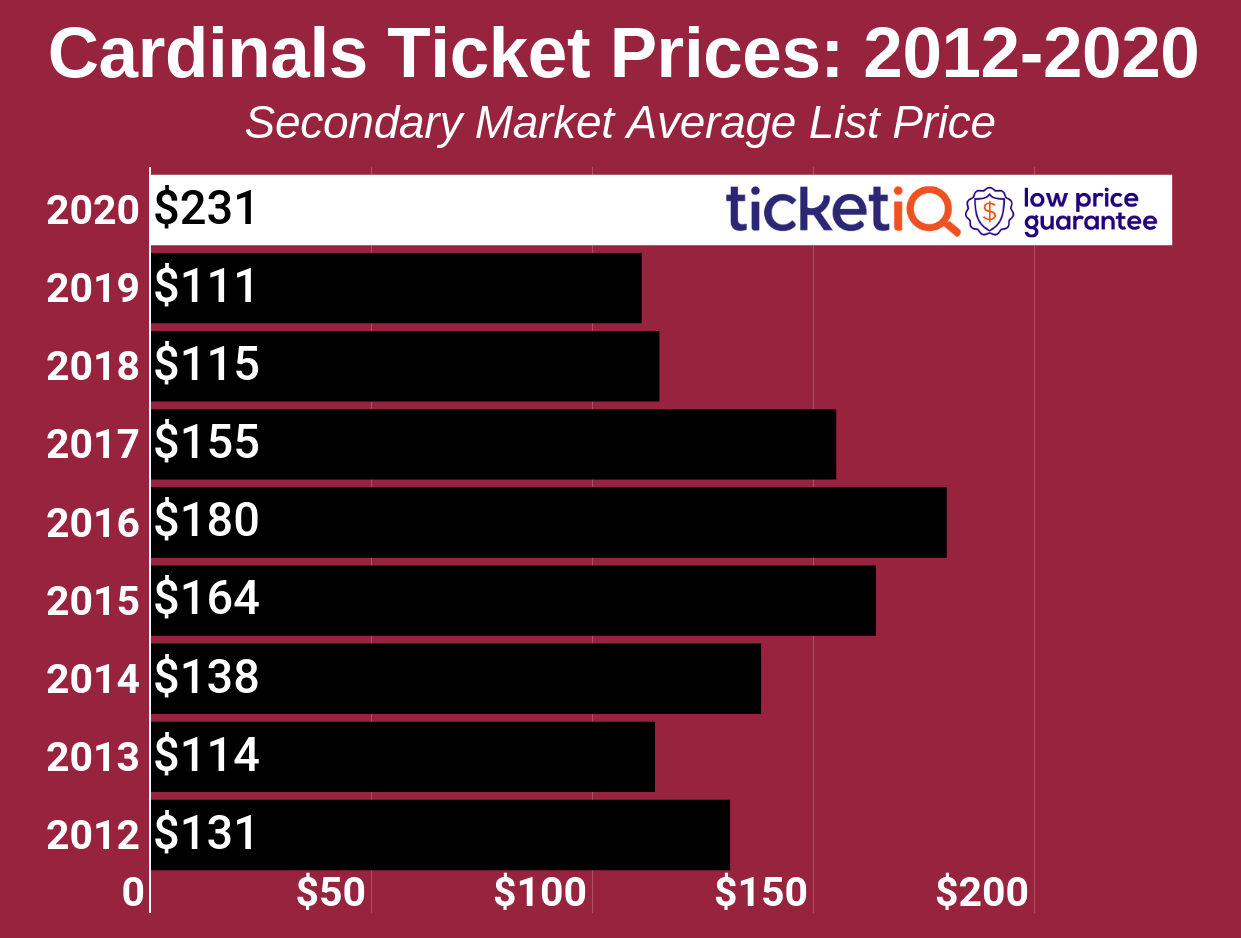 Fans interested in season tickets to the Cardinals can join the Season Ticket Priority List, which gives them the opportunity to choose season tickets ahead of the general public. The sooner you join the list, the better your seat selection opportunity will be. Season-ticket holders get merchandise discounts, access to game-day parking, and invitations to special events.

Season tickets for 2020 will start at $450 for seats in the Terrace End Zone and go up to $1,400 on the Main Level at the 50-yard line. Prices for Club Seats are available by contacting the team.

Club Seats are located on the 200 Level on the sidelines and on the corners. Prices vary depending on the location of the seat and access. All Club ticket holders get private Club entrances, early entry to the stadium, happy hours before and after the game, and wider, cushier seats. There are also private Lofts and Field Boxes available for single games or as season tickets.

Below is a look at the Clubs available:

50-Yard-Line Lounges: Recently remodeled, the 50-Yard Line Clubs have a 49-foot video wall and a 64-foot long service bar in an updated setting that includes a “unique fabric ceiling,” according to the team website.

Flight Lounge: The Cardinals’ newest club, the Flight Lounge features a different brand of wine weekly, and the setting is intimate.

Bubble Lounge: A new space at State Farm Stadium, this Club is overlooking the 50-Yard Line Lounge on the west side of the stadium, and ticket holders can get a pregame brunch and select from an a la carte menu during the second quarter. The space has high-end finishes from a stunning chandelier to stone bars.

The Cardinals now have the Arizona Cardinals App, which allows fans to gain digital entry into State Farm Stadium, as well as buy, sell or transfer tickets. Fans can also get up-to-date info about the team, watch press conferences or check out an interactive map of State Farm Stadium. The app is available via the App Store and Google Play.

How Much Are 2019 Arizona Cardinals Tickets

The cheapest tickets on the primary market start at $44 for the Lions, Panthers, Falcons, 49ers and Rams games.  The cheapest ticket jumps to $62 for the Browns and Seahawks games, and $109 for the Steelers game, which is also the priciest game on the secondary market.

On the secondary market, two games are available via TicketIQ for $99 or less, and only the Steelers game will cost fans more than $200. The cheapest ticket for any Cardinals home game is $26 vs. Carolina on September 22.

Demand for Cardinals tickets has been on the decline since 2016, when the average asking price was $180, the highest of the decade. That spike followed the Cardinals’ last appearance in the NFC Championship. Arizona was 3-13 in 2018. 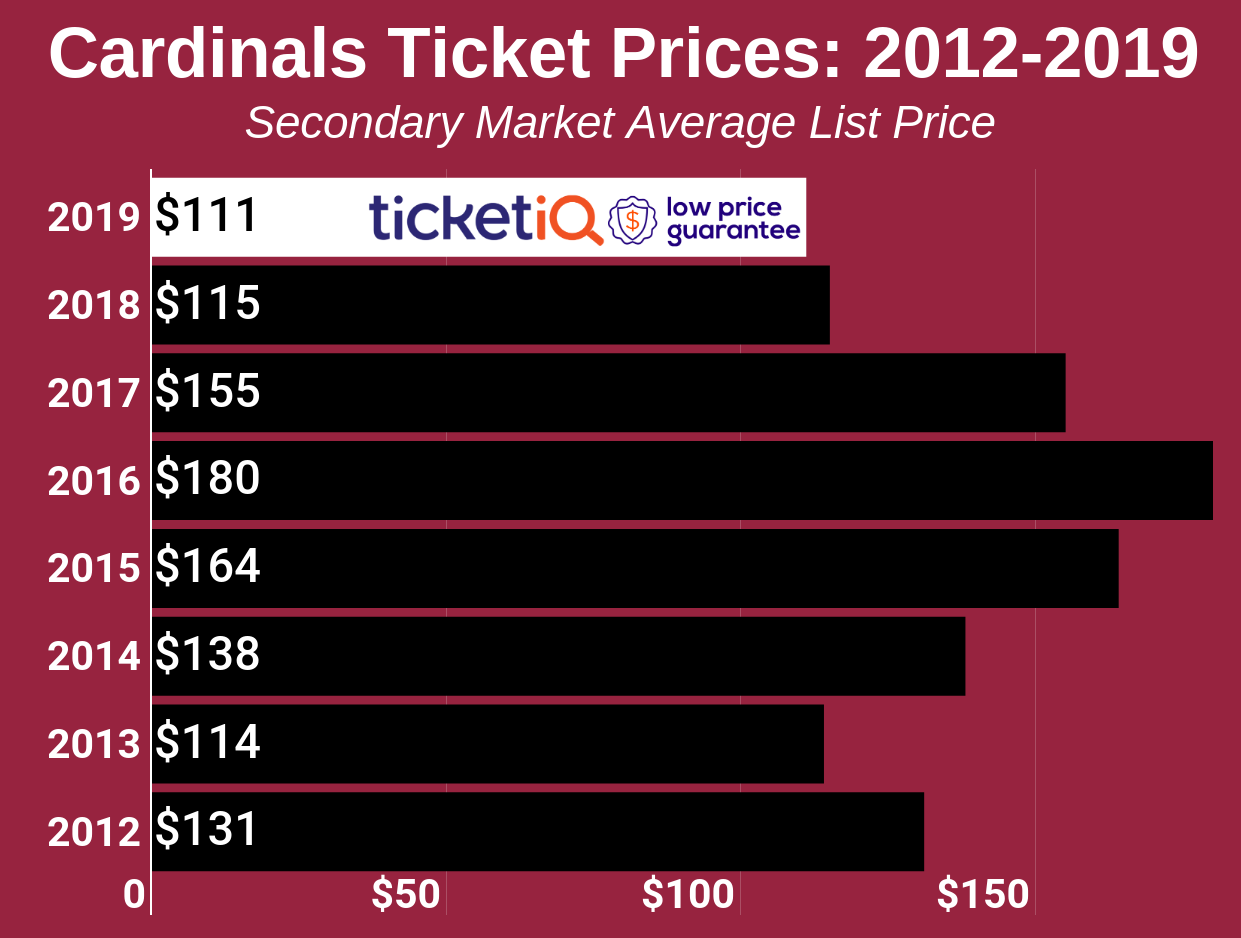 Prices For All Cardinals Home Games on the 2019 Schedule

After winning seven consecutive, the Cardinals have lost the last two to the Lions, who are playing at Arizona for the second consecutive season. The $105 average asking price is tied with the December 1 Rams date as the third cheapest on the secondary market. The Lions won last year’s meeting, 17-3.

This game is the cheapest on the secondary market, giving Arizona fans one of two opportunities to get into State Farm Stadium for less than $100. The Cardinals and Panthers have played only 16 times, and the Panthers knocked the Cardinals out of the postseason in the NFC Championship in 2016 and previously in a 2015 Wild-Card game. The Cardinals won a 2009 Divisional Playoff game. The teams last met in 2016, when the Panthers beat the Cardinals, 30-20, on October 30, 2016.

This game marks the first home meeting against an NFC West rival and is the third most expensive on the secondary market. There’s plenty of parity in this rivalry – the Seahawks hold a 20-19-1 all-time series advantage, and won both games last season.

One of two home games with a secondary market average asking price of less than $100, the Falcons and Cardinals have been playing on and off since the Cardinals’ St. Louis days. Atlanta has dominated of late, winning the last three, including a 40-14 victory at Atlanta last season. The Cardinals lead the all-time series, 16-15. This meeting will be the Falcons first trip to Arizona since 2013.

As NFC West rivals, these teams play twice a year, and this is the first of 2019’s two meetings. play The Cardinals have dominated of late, winning the last eight consecutive. This game is the fourth most expensive on the secondary market and one of four that will cost fans $100 or more.

This is an odd pairing in that both teams trace their roots to St. Louis and the teams have been playing since 1937. Since the Rams moved back to Los Angeles ahead of the 2016 season, the teams have played twice a season, and the Rams have won five of those six. Overall, the Rams have a 41-38-2 all-time series record. This game is tied with the Lions game as the third cheapest at home.

These teams last met in 2015, and though they now play only every few years, there’s still an intensity to the games – especially after the Steelers beat the Cardinals to win Super Bowl XLIII in 2009. That victory marked the first of three consecutive for Pittsburgh, which hasn’t visited Arizona since 2011. With all that in mind, it should be no surprise that this is the priciest home game on the secondary market.

The second most expensive game on the secondary market, the Cardinals and Browns haven’t played since 2015, and the Cardinals have won the last three, including a 34-20 victory in 2015. The Browns lead the all-time series, though, 33-14-3. Cleveland last visited Arizona in 2011.