Where To Buy 2020 Buffalo Bills Tickets

Buffalo Bills tickets are are available for sale on the secondary market as of the 2020 schedule release.

For more detailed data on 2020 Bills tickets, register for updates.

How Much Are 2020 Buffalo Bills Tickets

On the primary market, the Bills single-game ticket website page includes Ticketmaster links to each home game, and tickets start at $47 at New Era Field. The cheapest seats are 300-Level Sections tickets on Sunday, November 29 at 1:00 PM against the Los Angeles Chargers. The get-in price for this contest on the secondary market is $50.

Ticketmaster has provided the following information related to the rescheduling of games: “If a game is postponed or rescheduled, your tickets are valid for the new date, so hang onto them and we will keep you posted.”

On the secondary market, TicketIQ has seats available for all Buffalo Bills home games. The average ticket price on TicketIQ is $179. Thatt price for Bills tickets has increased by 9.9 percent since last year, which ranks as the fifth-lowest increase in price in the NFL from 2019 to 2020. 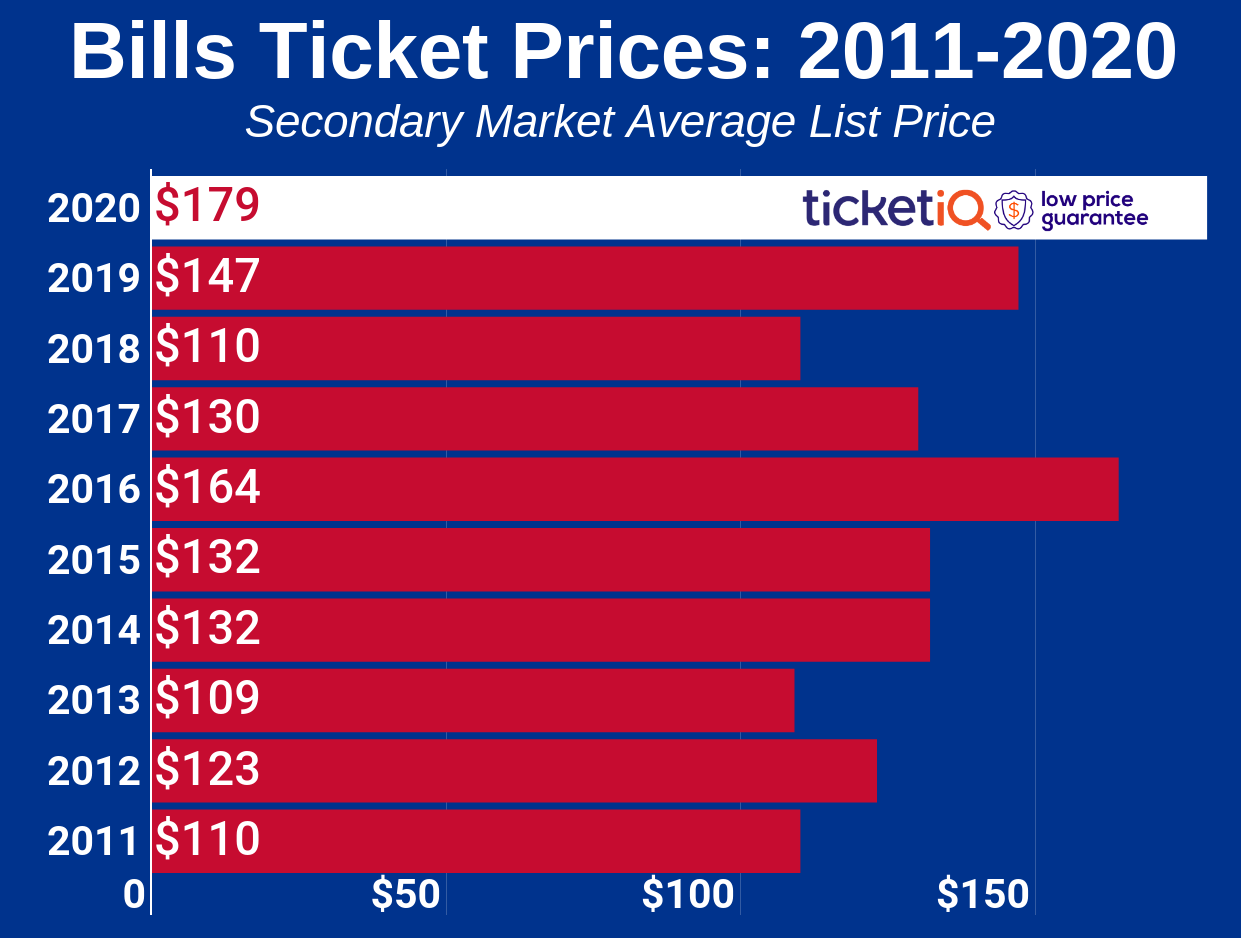 On the primary market, season tickets are available. There are no mini plans offered.

Season tickets start at $630 per ticket in Sections 316 and 317 via the Bills’ Ticketmaster page, and the most expensive season ticket is $2,958.

New Era Field has the following club options: there are Sideline Clubs and Indoor Clubs, including the M&T Club and Goal Line Club. Other clubs include the Pepsi Club (Sections 206-216), Dunn Tire Club (Sections 229-232), and Toyota Club (sections 235-238).

The Sideline Clubs include covered seating and heaters for the fans to stay warm. In addition, there are private restrooms, concessions, and high-definition televisions to watch the rest of the NFL games.

The Indoor Clubs are climate-controlled and include theater-style seating.

The M&T Club has an indoor all-inclusive buffet and bar. There are private entrances, exclusive giveaways, and high-definition televisions to watch the rest of the NFL games.

The Goal Line Club has indoor concessions and in-seat beverage service. There are also private entrances, exclusive giveaways, and high-definition televisions to watch the rest of the NFL games.

To manage your Bills tickets, the team has a mobile app available on the App Store and Google Play. The app is also used for mobile entry into the venue. The Bills require ticket holders to use mobile tickets to enter New Era Field, and it is suggested to add the ticket to your phone’s mobile wallet to avoid slow WIFI or cellular signal while entering the stadium. Screenshots of the dynamic barcode on the ticket will not be accepted.

Where To Buy 2019 Bills Tickets

Primary market tickets to see the Buffalo Bills play at the NFL's only "sunken" stadium, New Era Field, are available via Ticketmaster for single-game tickets. Tickets are currently available for all Bills home games

On the secondary market TicketIQ has Low Price Guarantees on Bills tickets for all games on the 2019 schedule, in addition to Low Price Guarantees on all NFL tickets. That means that if you find a secondary market ticket for less on a site like StubHub orVivid Seats, we’ll give you 200% of the difference in ticket credit. TicketIQ customers save an average of 5%-20% compared to StubHub and Vivid Seats.

How Much Are 2019 Bills Tickets

In the preseason the average asking price for a Bills ticket at New Era Field on the secondary market was $102, but has since risen 44% and now the average is $147. That is the second highest Bills tickets have been this decade, behind only the 2016 season when tickets averaged $164 per seat. 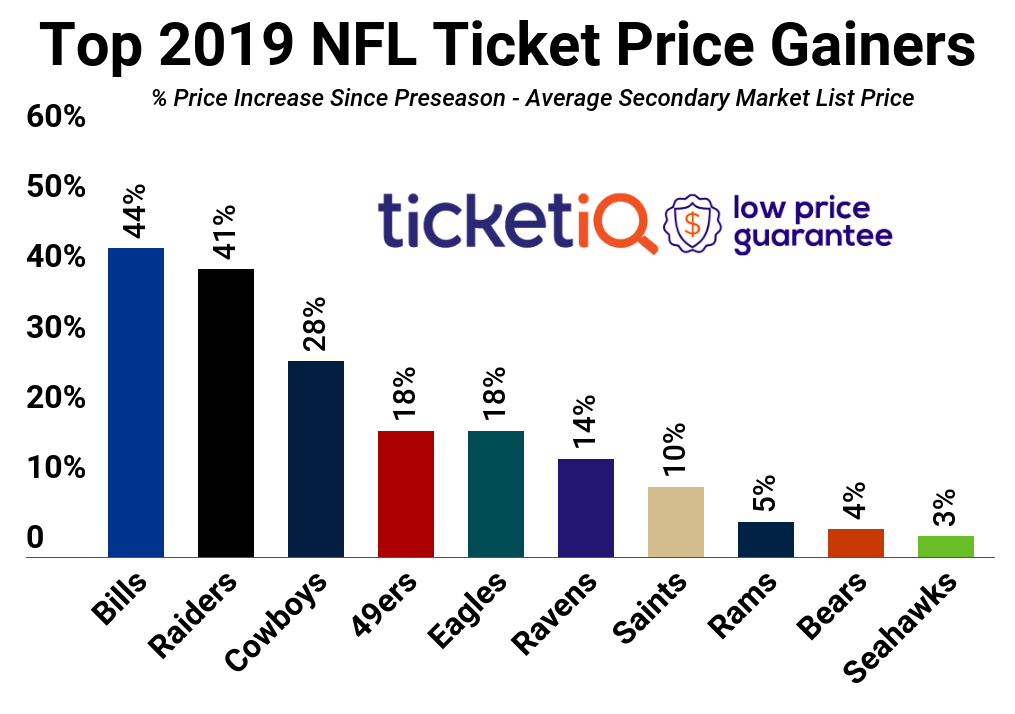 Ticket Prices At Start Of 2019 Season 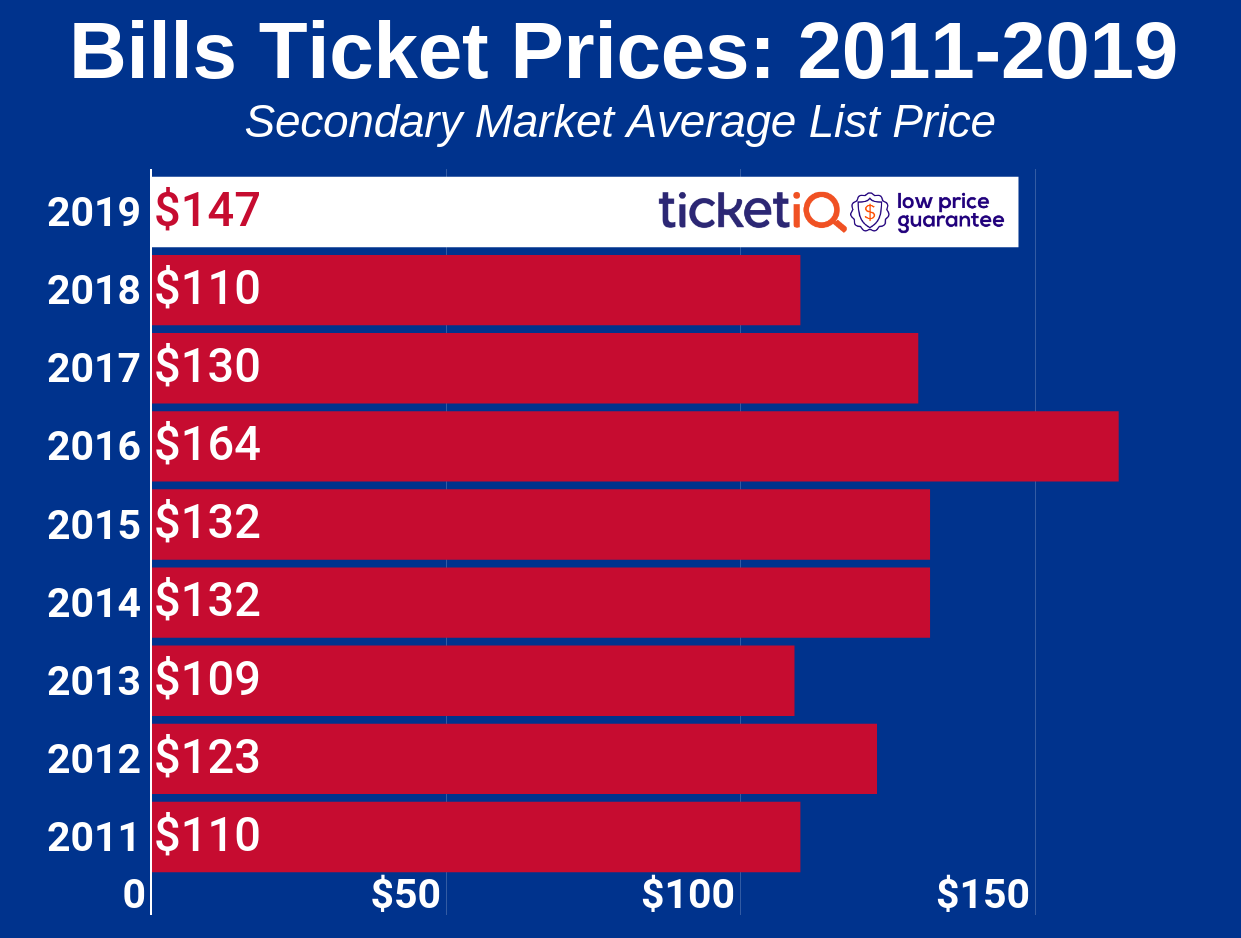 At the get-in price, fans can get into most Bills game for less than $45, making it a great value.  The three priciest games, against the Patriots, Philadelphia Eagles and Cincinnati Bengals (home opener) with the average prices all north of $151, and get-in prices all $56 or more. The least expensive game of the season is December 29th matchup against the Jets with a get-in price of just $27.

On the primary market, tickets start as low as $25 for seats in the upper levels for the Jets game, and between $29 and $79 for all other games.

Prices For All Bills Home Games On The 2019 Schedule

The Bills and Bengals have played on and off since 1968 and the Bills owned the Bengals during a 10-game winning streak between 1989-2010, but since then, the Bengals have won four of the last five. This game is the third priciest at home on the secondary market.

It's no surprise that when the Patriots come to town, prices are high. As AFC East rivals, the teams play twice a year, but during the Tom Brady era, the Patriots have been dominant, winning 29 of the last 32 meetings. The $189 average asking price is the highest of the season. The teams have been playing regularly since the inception of the AFL in 1960.

The fourth priciest game of the season, this game is another between AFC East rivals that originated in 1960. The rivalry reached its pinnacle in the 1990s, when both teams were regular post-season contenders, but has cooled of late. The Dolphins hold a 61-48-1 all-time series advantage, but the Bills won the last meeting on December 30, 2018.

The Eagles and Bills have played only 13 times since their first meeting in 1973, and there's plenty of parity here -- the Eagles hold a 7-6 all-time series advantage, including winning the last meeting in 2015. This game is the second most expensive on the secondary market, and will be the first time the Eagles have visited Buffalo since 2011.

This meeting with an NFC team isn't moving the meter much -- it's the second cheapest home game on the secondary market this season. The Bills and Redskins last played in 2015, and the Bills hold an 8-6 all-time series advantage, after winning six consecutive between 1993-2011. The Redskins snapped that streak, winning the last game in 2015.

The Bills and Broncos have been playing since 1960, and the highlight was the 1992 AFC Championship in which the Bills won, 10-7. But there hasn't been much fire of late, and the $131 average asking price represents another opportunity for fans to get into an NFL game at a great price. This is the second time in three years that the Broncos have played at the Bills.

These teams have met only eight times dating to 1999, when the Ravens entered the league as an expansion team. Baltimore has a 5-3 all-time series advantage, and this game is the third cheapest Bills home game. The Ravens have won the last two consecutive, including last season's September 9 meeting.

These teams have shared coaches -- Rex Ryan -- and players -- quarterback Ryan Fitzpatrick -- over the last decade, and are regional rivals, yet this game is the cheapest of the season at home. Both members of the AFC East, the Bills hold a 62-55 all-time series advantage, though the teams went 1-1 last season.