Where To Buy 2020 Houston Texans Tickets

Houston Texans tickets are available for sale on the secondary market as of the 2020 schedule release.

For more detailed data on 2020 Texans tickets, register for updates.

How Much Are 2020 Houston Texans Tickets

On the primary market, the Texans single-game ticket website page includes Ticketmaster links to each game, and tickets start at $65 at NRG Stadium. The cheapest seats are 600-Level tickets on Sunday, January 3 at 12:00 PM against the Tennessee Titans. The get-in price for this contest on the secondary market is $69.

TicketIQ has seats available for all Houston Texans home games. The average ticket price on TicketIQ is $293, which ranks as the 11th-lowest one in the NFL. The secondary market price for Texans tickets has increased by 45.2 percent since last year, which is in the middle of the pack in price in the NFL from 2019 to 2020. 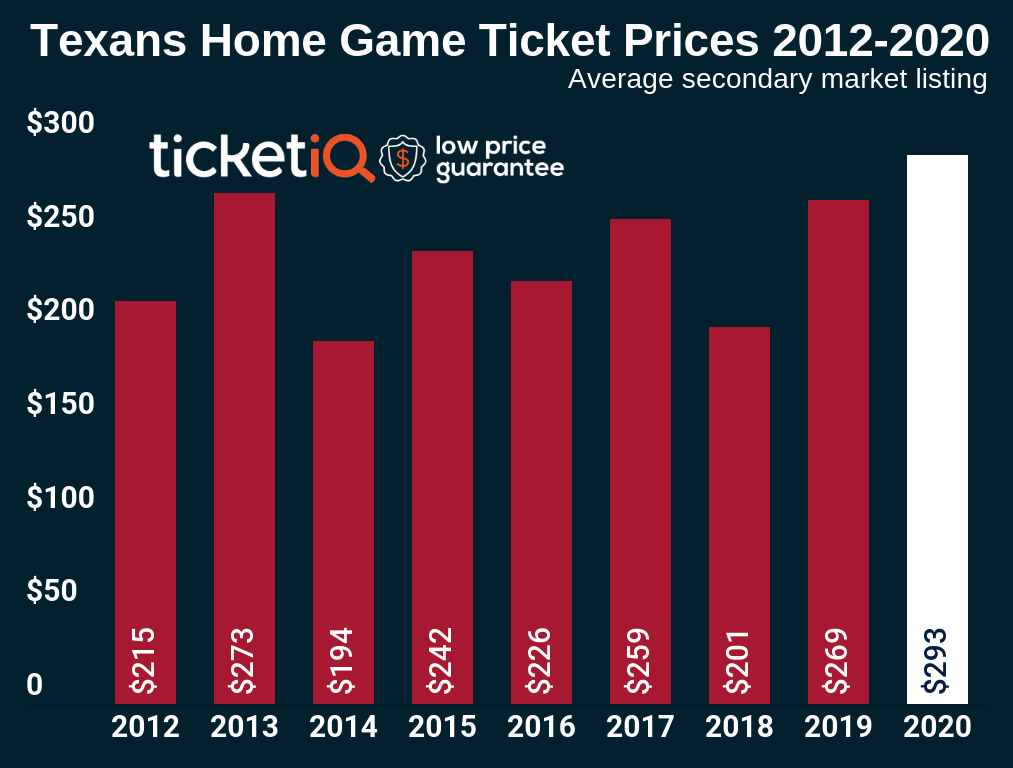 On the primary market, neither season tickets nor mini plans are currently offered.

Fans who are interested can join the wait list and request Gridiron section seats in the upper level starting at $560 and Lower Level Hospitality Seats starting at $2,400.

What Are NRG Stadium Club Options

Fans can purchase anywhere from one ticket to more than 10 tickets for the Churrascos Club and Pre-Game Sideline Experiences.

The Churrascos Club has a buffet, open bar, and live entertainment. The club, which has reserved seating, has packages available for fans that would like game tickets and fans that do not want game tickets.

The unique Pre-Game Sideline Experience allows fans to enjoy the field atmosphere during pre-game of a Texans game. It also includes an all-inclusive buffet and open bar before heading on the field.

The Verizon Club is found on the Club Level, and club membership includes premium seating and luxury amenities like in-seat food and beverage via the Texans Mobile App. Multiple televisions are also found throughout the club to watch the NFL action the day of the game.

To manage your Texans tickets, the team has a mobile app available on the App Store and Google Play. The app is also used for mobile entry into the venue. The Texans require ticket holders to use mobile tickets to enter NRG Stadium, and it is suggested to add the ticket to your phone’s mobile wallet to avoid slow WIFI or cellular signal while entering the stadium.

Where To Buy 2019 Houston Texans Tickets

TicketIQ is a ticket market place with access to Low Price Guarantees on all NFL tickets. If you find the same ticket for less, we'll give you 200% of the difference in ticket credit. TicketIQ is also the leading source of ticket market data used by major news outlets, like CNBC, Business, Insider, Fox and others. Enjoy the TicketIQ blog for most in-depth coverage of the Texans ticket market and use TicketIQ.com to save 15% compared to other major tickets sellers.

How Much Are 2019 Houston Texans Tickets

With their first division championship since 2016, and a dynamic face of the franchise in Deshaun Watson, Texans ticket on the  prices on the secondary market have almost doubled. In the days following the draft, Ticketmaster across all their games at NRG Stadium. The majority of the available inventory is in the upper level, with prices that are in-line with the secondary market. 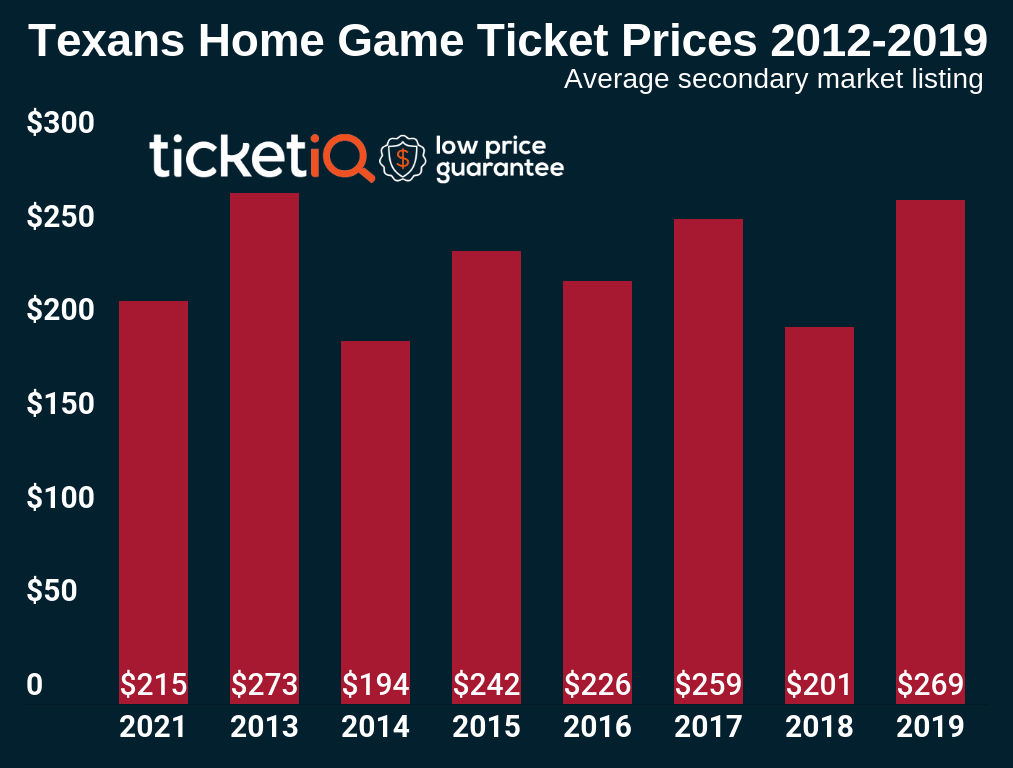 Prices For Texans Tickets On The Secondary Market Are Down 22%

The Houston Texans home opener is set for September 23 against the New York Giants, and demand is high, making the asking price on the secondary market the second highest of the season so far. Below is how Texans tickets prices stack up on the secondary market across the league. As you can see below, 2018 Houston Texans tickets are down 22% compared to last season, and are the least expensive since 2011, when secondary ticket marketplace TicketIQ.com began tracking data. The priciest season in Houston was 2017, when the Texans won the AFC South and got as far as a divisional game before losing to New England in the playoffs. 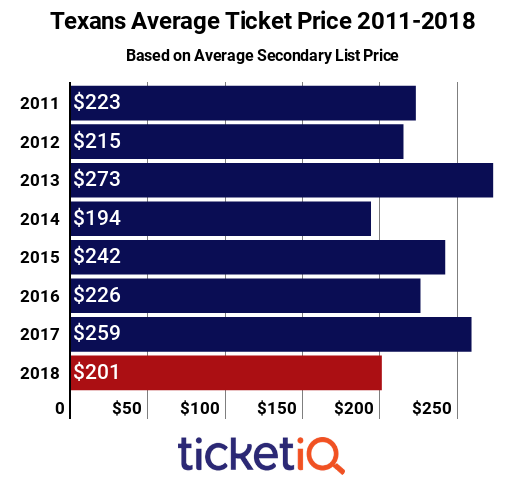 Where to Buy Tickets

With a $201 average asking price, Texans tickets are ranked No. 20 in terms of price across the NFL. The New England Patriots are ranked No. 1, with a $479 average asking price. The Texans have been sold out of season tickets since 2002, but fans can join the priority waitlist. The only single-game tickets are through the Texans are from ticket partner, Ticketmaster, and are verified resale tickets, which are available for all games. Secondary ticket marketplace TicketIQ.com has season tickets available beginning at $1,326 and single-game seats for every game. The average asking price for all games except the season opener and the October 7 Dallas Cowboys game, is below $171.

Prices For Each Game on 2018 Texans Schedule

Known as the Governor's Cup, the game between Dallas and Houston is the most expensive of this -- and usually, any -- season. The rivalry dates to 1965, between the then Houston Oilers and the Cowboys. Dallas holds a 25-19 edge, including games against the Oilers and Texans. The teams played in the preseason, also at NRG Stadium, and won, 14-6. The average asking price for the October 7 game is $556, making it one of the Top 15 most expensive games in the NFL this season. The next most expensive game is the season opener against New York, which is trending at $243. Houston opened with a loss against New England, but if it bounces back with a victory at Tennessee Sunday, prices for the Giants game could rise. 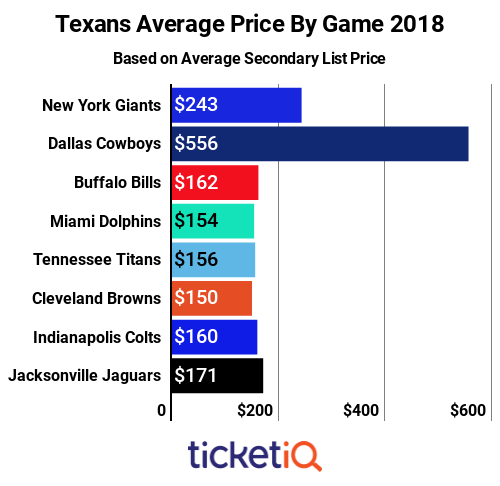