Where To Buy 2020 Jacksonville Jaguars Tickets

Primary market tickets for Jaguars home games are available through the Jaguars website and via primary partner Ticketmaster.

Jacksonville Jaguars tickets are available for sale on the secondary market as of Thursday's schedule release.

For more detailed data on 2020 Jaguars tickets, register for updates.

How Much Are 2020 Jacksonville Jaguars Tickets

On the primary market, the Jaguars single-game ticket website page includes Ticketmaster links to each game, and tickets start at $25 at TIAA Bank Field. The cheapest seats are 400-Level tickets on December 13 against the Tennessee Titans. The get-in price for this contest on the secondary market is $33.

TicketIQ has seats available for all Jacksonville Jaguars home games. The average ticket price on TicketIQ is $215, which ranks as the third-lowest one in the NFL. Due to lack of inventory, the secondary market price for Jaguars tickets has increased by 119 percent since last year. 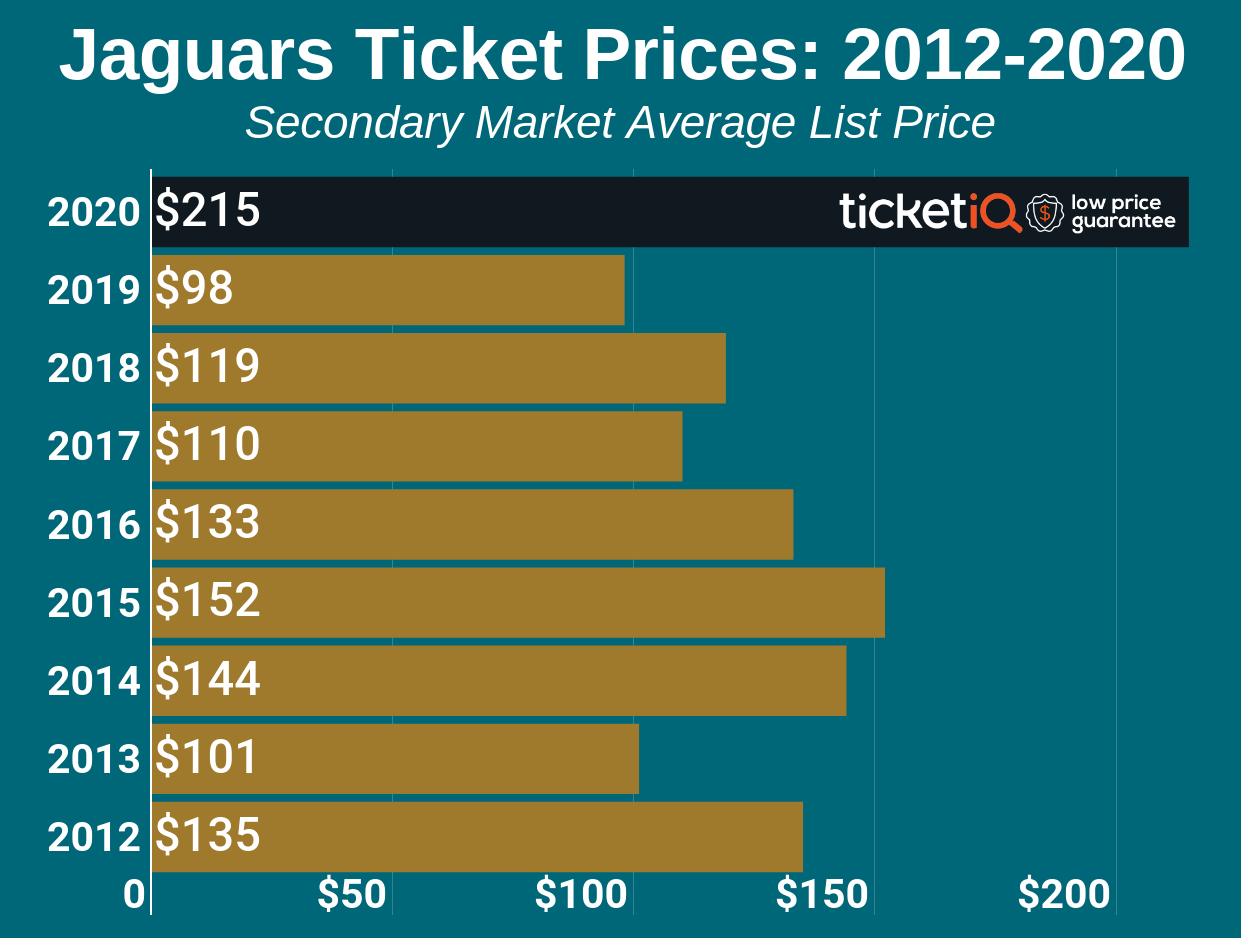 On the primary market, season tickets are available, and they are offering multiple payment schedules, including a two-year one.

Season tickets start at $541 per ticket in several 400-Level Sections via the Jaguars’ Ticketmaster page, and the most expensive season ticket is $4,594.

Season ticket members receive over $3,000 in deals and discounts along with the following amenities: VIP invitations to member events, insider access to meet and greets, and 50 percent off concession favorites as well as free water refills.

The Jaguars do not offer mini plans, but the Jaguars accommodate groups of all sizes, and they can enjoy TIAA Bank Field together.

In the Club East and West, there are club seats, club tables, and club bar rail seats. Bar tables and sofas are also available on the patio.

To manage your Jaguars tickets, the team has a mobile app available on the App Store and Google Play. The app is also used for mobile entry into the venue. The Jaguars require ticket holders to use mobile tickets to enter TIAA Bank Field, and it is suggested to add the ticket to your phone’s mobile wallet to avoid slow WIFI or cellular signal while entering the stadium.

Where To Buy 2019 Jaguars Tickets

Primary market tickets for Jaguars home games are available through the Jaguars website and via primary partner Ticketmaster. There are multiple choices of season ticket packages available, which start at $351. Single game tickets are also available, as are group tickets and London Packages for their matchup against the Texans are available via Primesport.  Premium options are available directly from the team by filling out a form on the team's website.

On the secondary market TicketIQ has Low Price Guarantees on Jaguars tickets for all games on the 2019 schedule, in addition to Low Price Guarantees on all NFL tickets, which means that if you find a secondary market ticket for less on a site like StubHub or SeatGeek, we’ll give you 200% of the difference in ticket credit. TicketIQ customers save an average of 5%-20% compared to StubHub and Vivid Seats.

How Much Are 2019 Jaguars Tickets

Tickets for Jaguars home games on the secondary market are averaging $98 at TIAA Bank Field. The Jaguars will play seven home games at TIAA Bank Stadium and will play one other “home” game against the Texans in London this season. 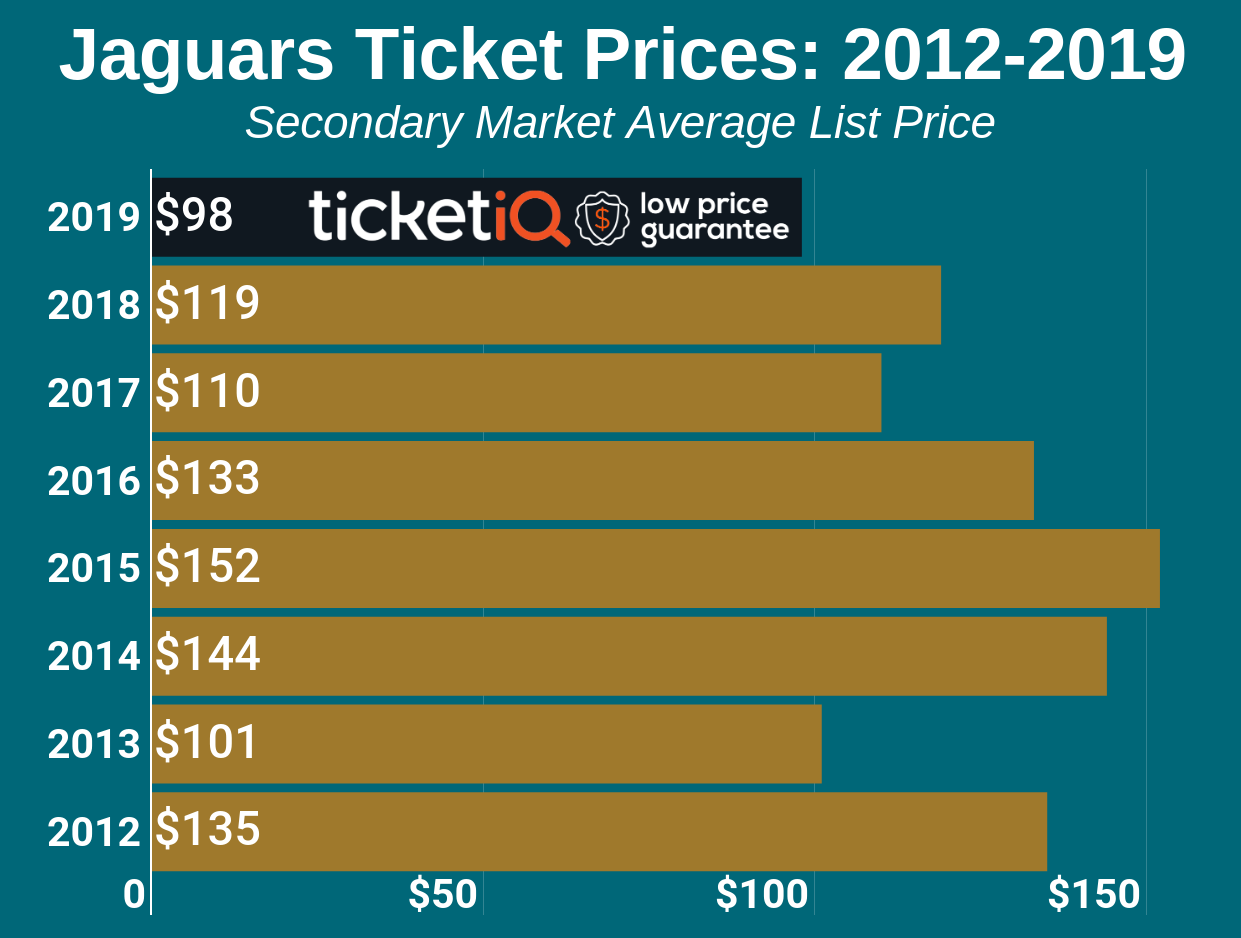 Prices For All Jaguars Home Games On The 2019 Schedule

The Chiefs have won each of the last four meetings against the Jaguars. Last season, Bortles threw for 430 yards and scored two touchdowns and the Jacksonville defense intercepted Patrick Mahomes twice, but the Jaguars fell at Arrowhead Stadium, 30-14. Jacksonville looks for revenge in the most expensive game at TIAA Bank Stadium this season.

The cheapest Jaguars ticket of the season at TIAA Bank Stadium is against Tennessee. Doug Marrone will be looking to turn the Jags’ struggles around, as the Titans have swept the season series from Jacksonville each of the last two seasons.

Sean Payton’s high-octane offense makes its first trip to Jacksonville since 2011. The last meeting between the two squads was in 2015 when Bortles threw for 368 yards and four touchdowns, but Drew Brees led the Saints to a 38-27 victory with 412 yards and three touchdowns.

The Jaguars hosted the Jets last season and had by far their largest margin of victory with a 31-12 win. Jacksonville moved to 3-1 on the season behind Bortles’ 388 passing yards and two touchdowns.

On average, the Jaguars and Buccaneers have faced each other once every four years since 1995, and Jacksonville is 4-2 overall against Tampa Bay. However, the most recent meeting was a 38-31 Buccaneers victory behind Doug Martin’s 123 yards and two touchdowns and Jameis Winston’s 209 yards and one touchdown.

The Jaguars had faced the Chargers every year from 2013 to 2017, and the most recent meeting was a big game for Jacksonville. Marrone’s Jags faced a 14-6 deficit late in the third quarter, but came back and forced overtime and won on a 30-yard Josh Lambo field goal to move their record that season to 6-3.

The Jaguars and Colts have alternated wins and losses over their last three meetings, but Jacksonville has won three of those last four contests. From December 2015 to November 2018, at least one team had scored 24 points in every meeting, but their last contest was an anomaly: a Jags 6-0 victory on December 2, 2018.