Las Vegas Raiders tickets are available for sale on the secondary market as of the 2020 schedule release.

For more detailed data on 2020 Raiders tickets, register for updates.

How Much Are 2020 Las Vegas Raiders Tickets

On the primary market, Raiders single-game tickets are sold out.

The move to Las Vegas has increased the popularity of Raiders tickets, as they are the hottest ticket in the league and possibly in all of sports.

TicketIQ has seats available for all Las Vegas Raiders home games. The average ticket price on TicketIQ is $1,098, which is by far the highest in the NFL. The secondary market price for Raiders tickets has increased by a whopping 346 percent since last year. 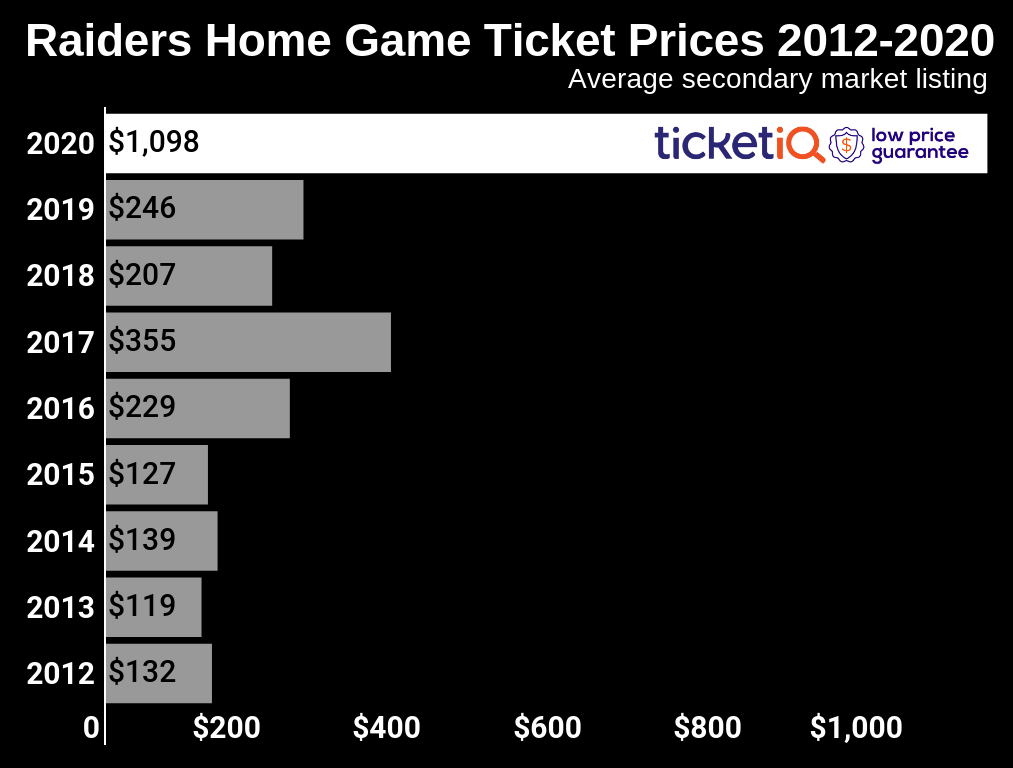 On the primary market, season tickets are no longer available, but fans can join the PSL Waitlist. There are no mini plans offered.

Single-Game Suites have 16 tickets apiece plus the opportunity to purchase two Standing Room Only seats. They also include VIP parking passes and pregame field passes.

To manage your Raiders tickets, the team has a mobile app available on the App Store and Google Play. The app is also used for mobile entry into the venue. The Raiders require ticket holders to use mobile tickets to enter Allegiant Stadium, and it is suggested to add the ticket to your phone’s mobile wallet to avoid slow WIFI or cellular signal while entering the stadium.

Where To Buy 2019 Raiders Tickets

TicketIQ is a ticket market place with access to Low Price Guarantees on all NFL tickets. If you find the same ticket for less, we'll give you 200% of the difference in ticket credit. TicketIQ is also the leading source of ticket market data used by major news outlets, like CNBC, Business, Insider, Fox and others. Enjoy the TicketIQ blog for most in-depth coverage of the Raiders ticket market and use TicketIQ.com to save 15% compared to other major tickets sellers.

How Much Are 2019 Raiders Tickets

Not surprisingly, the most expensive game of the season is the final game at Oakland Alameda (Ring Central) coliseum against the Jaguars, which starts at $103. For anyone interested in being the Black Hole for the final game, tickets start at around $200. For all games, there are also a limited number of lower-level tickets available on the visitors side through Ticketmaster.com, starting at $150. 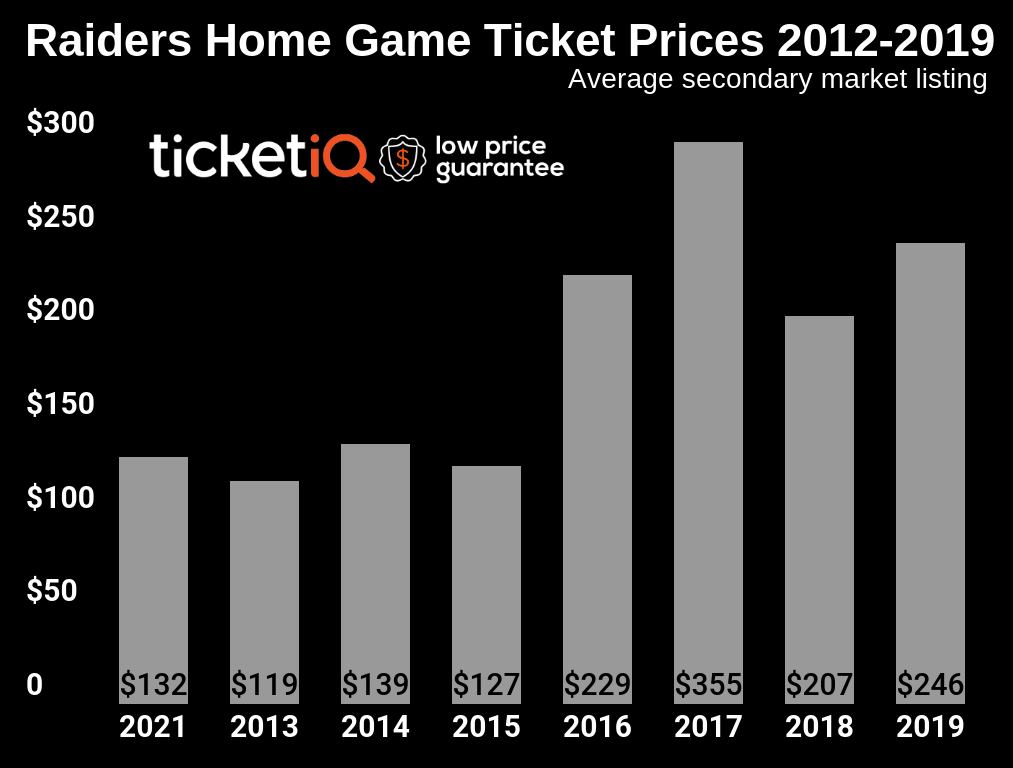 TicketIQ is committed to the cheapest tickets possible, and we make much less on sold out tickets compared to other major marketplaces like StubHub and Vivid. That means ticket buyers save from up to 25% on TicketIQ on sports, music and theater. We're able to do this because we also work with teams, venues, and other ticket owners, to help them sell tickets at face price, directly to consumers like you, through Ticketmaster and Seatgeek. For an overview of the 2019 NFL Ticket Buying landscape, and details on the cheapest way to get tickets for every team, visit the TicketIQ Blog.

Starting as early as 2019, the Oakland Raiders may finally have a new city to call their own. After traipsing around California with 20+ year stints Oakland, Los Angeles and Oakland again, the Raiders could be headed to Las Vegas and, for the first time, be the only team in the marketplace. After reaching a decade high for ticket prices in 2017, demand for 2018 Oakland Raiders tickets isn’t nearly as strong, according to secondary ticket marketplace TicketIQ.com. But despite the drop, games on the 2018 Oakland Raiders schedule are the third most expensive since 2011 when TicketIQ.com began tracking data, and are the 17th most expensive in the NFL. 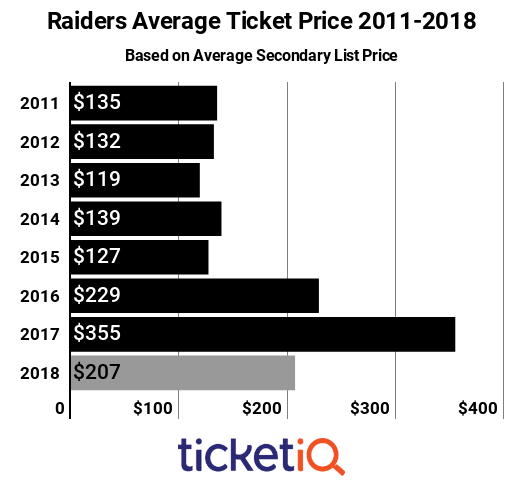 That ticket prices dropped before the Raiders potential last season in Oakland isn’t unusual. The Los Angeles Chargers, who moved from San Diego up the I-5 last season, saw a drop in prices from $213 in 2015 to $157 in 2016. On the flip side, the Los Angeles Rams, who spent two decades in St. Louis and won a Super Bowl there (1999), saw prices increase from $88 to $138 for the final season in 2015. 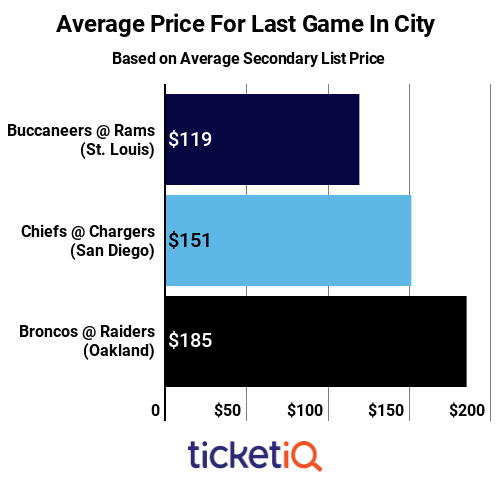 The Raiders shouldn’t expect any kind of bump for their final game of the 2018 season (and possibly forever) at Oakland-Alameda Coliseum. In fact, it cost fans $119 to get into the final game in St. Louis, as compared to a season average of $138, and fans paid $151 to see the Chargers play the Kansas City Chiefs in the their final San Diego game. The season average was $157

Despite the overall price drop from last year, Raiders tickets will be tough to come by this season. Single-game tickets are available through Ticketmaster, the team’s primary market partner, but only in very limited quantities. As examples, there are fewer than a dozen seats available in multiple sections for the Pittsburgh Steelers game and some sections are already sold out for nearly every game. Season tickets are sold out for the third consecutive season, though fans can sign up for a priority waiting list with no money down. Those interested in season tickets if the team does move to Las Vegas, can get on a the list and pay $100 for a chance to buy a personal seat license.

At Oakland-Alameda Coliseum, the single most expensive game this season will be the Raiders December 9 meeting with the Pittsburgh Steelers. The teams have a healthy rivalry that dates back to the 1972 “Immaculate Reception” game when the Steelers knocked the Raiders out of the playoffs. Since then, the Raiders have gone on to beat the Steelers in three of five post-season meetings, including twice on the way to Super Bowl victories (1976, 1983). Tickets for the game are all but sold out on the primary market, while the secondary market asking price is $378. 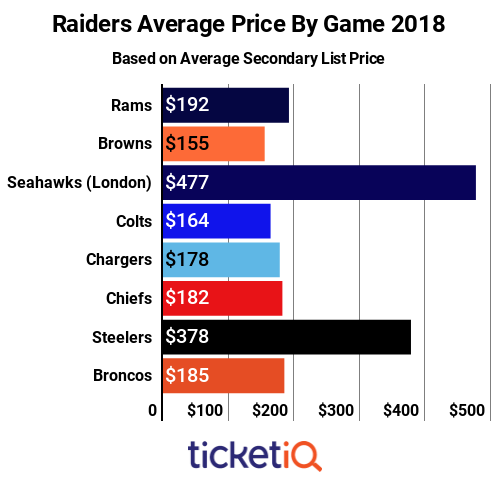 By way of comparison, in Section 304, Row 5, behind the end zone, a single primary market seat is available for $250 while the seat next to it is $334 on the resale market.

The next most expensive game of the season will be September 10 home opener against the Los Angeles Rams – one of two Monday Night Football appearances for the Raiders. The second will be Christmas Eve, when Oakland hosts AFC West rival Denver. For the Rams game, the average asking price for a ticket on the secondary market is $195.

Oakland will play at home seven times during the regular season, as they’ll head to London for an October 14 game against Seattle. That game has the highest average asking price for a “home” game, at $477 on the secondary market and tickets are not available on the primary market.

Fans looking for a chance to get into Oakland-Alameda Coliseum on the cheap should target the September 30 Cleveland Browns and October 28 Indianapolis Colts games. The cheapest primary market ticket for those games is $80 and $90, respectively.

For all games, TicketIQ.com has seats available – both near the field and high above – that come with the company’s Low Price Guarantee. As examples, tickets are available for as little as $89 in the upper deck or $220 for a chance to sit in the legendary “Black Hole” section of the stadium.