Los Angeles Rams tickets are available for sale on the secondary market as of the NFL's schedule release.

For more detailed data on 2020 Rams tickets, register for updates.

How Much Are 2020  Los Angeles Rams Tickets

With the opening of their new stadium coming, the average asking price on the secondary market for a Los Angeles Rams ticket in 2020 is up 49.5% over last season. The $337 average asking price is still below the $390 league average, making it a great deal to see an NFL game. The Rams new SoFi Stadium in Inglewood, which they will share with the Los Angeles Chargers, is a state-of-the-art facility that features a 360-degree, dual-sided video board and the latest technology. 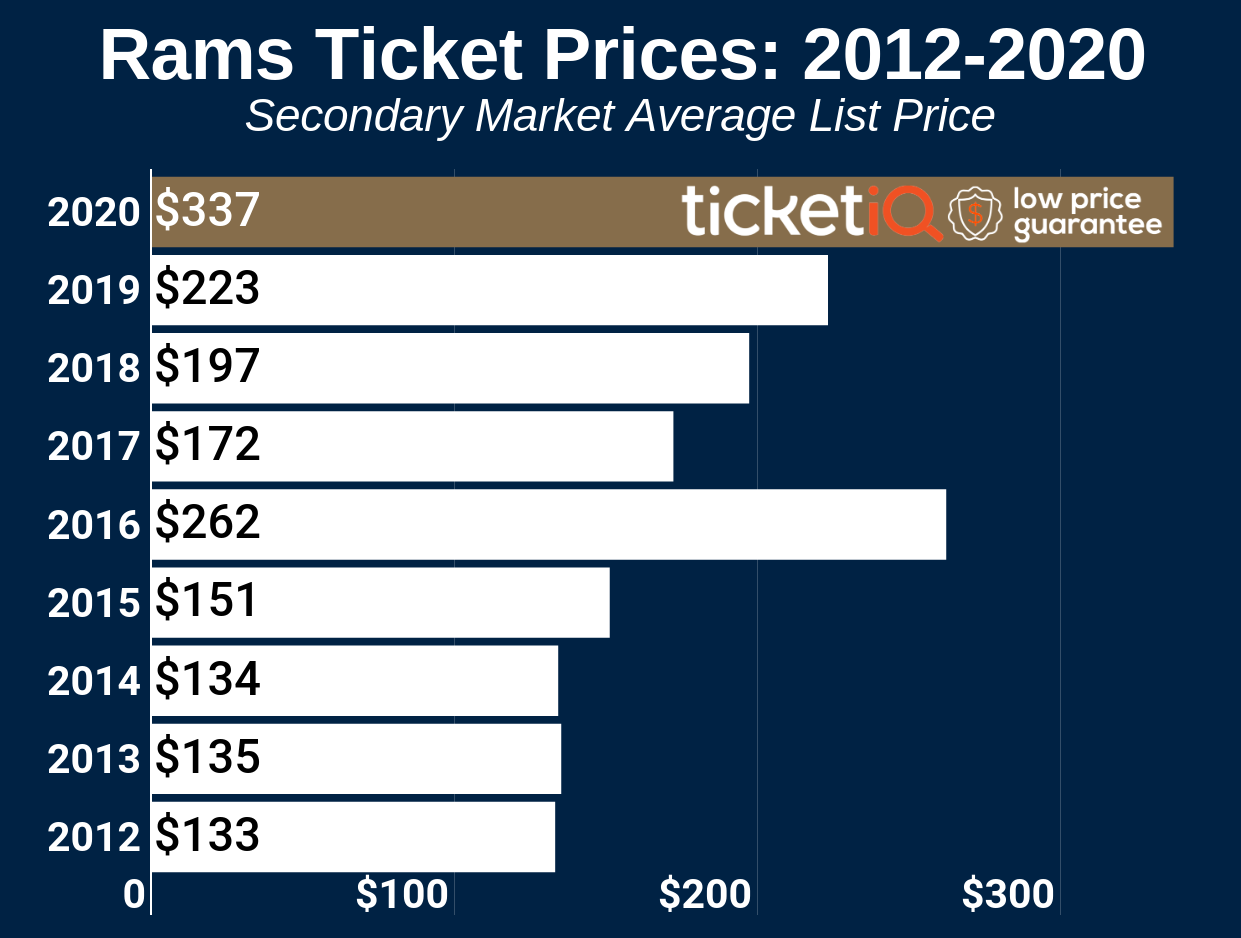 Rams season tickets are currently available starting as low as $105 per game, which includes both the seat price and SSL fee. The Rams are offering an interest-free payment plan. Rams season tickets holders also get priority access to single-game and post-season tickets, unique game-day experiences, and merchandise discounts. Seats start at $600 plus a $1,000 SSL on the 500 Level in the end zones, and go up to $3,750 with a $100,000 SSL fee for VIP Club seats at the 50-yard line.

The Rams will offer five levels of Club Seating, all on the 100 and 200 Levels along the sidelines. Season ticket prices for these sections are all $3,750, but the SSL prices vary from $15,000-$100,000. All of these seats include Club access throughout SoFi Stadium.

SoFi Stadium also has eight types of suites available, including Bungalow and Field Cabanas on field level and a Party Suite. Suite ticket holders get private entrances to the stadium, VIP parking, Club access and more. Suites are available for single games or as season tickets.

SoFi Stadium is designed for mobile entry, and the Rams will only accept digital tickets, which will feature a rotating bar code. Screenshots will not be accepted. Tickets purchased through the Rams or Ticketmaster are available via the Rams Mobile App, the Rams Account Manager or the Ticketmaster App, all of which are available to download via Google Play or the App Store. Fans can also buy, sell or transfer tickets through the apps.

How Much Are 2019 Los Angeles Rams Tickets

The reigning NFC champions are hoping to make it one step further this season after falling to the New England Patriots in Super Bowl LIII. Heading into the upcoming season, it is expected to see Todd Gurley getting fewer touches, so possibly he can be fresher for the postseason

Los Angeles will play seven home games because the Rams will be the “home team” when they play at Wembley Stadium in 2019 against the Cincinnati Bengals. The Rams’ ticket prices are the 17th most in the NFL at $223 per ticket. The price is 17% higher than last year’s Rams ticket and 48% higher than the average Rams ticket five years ago. 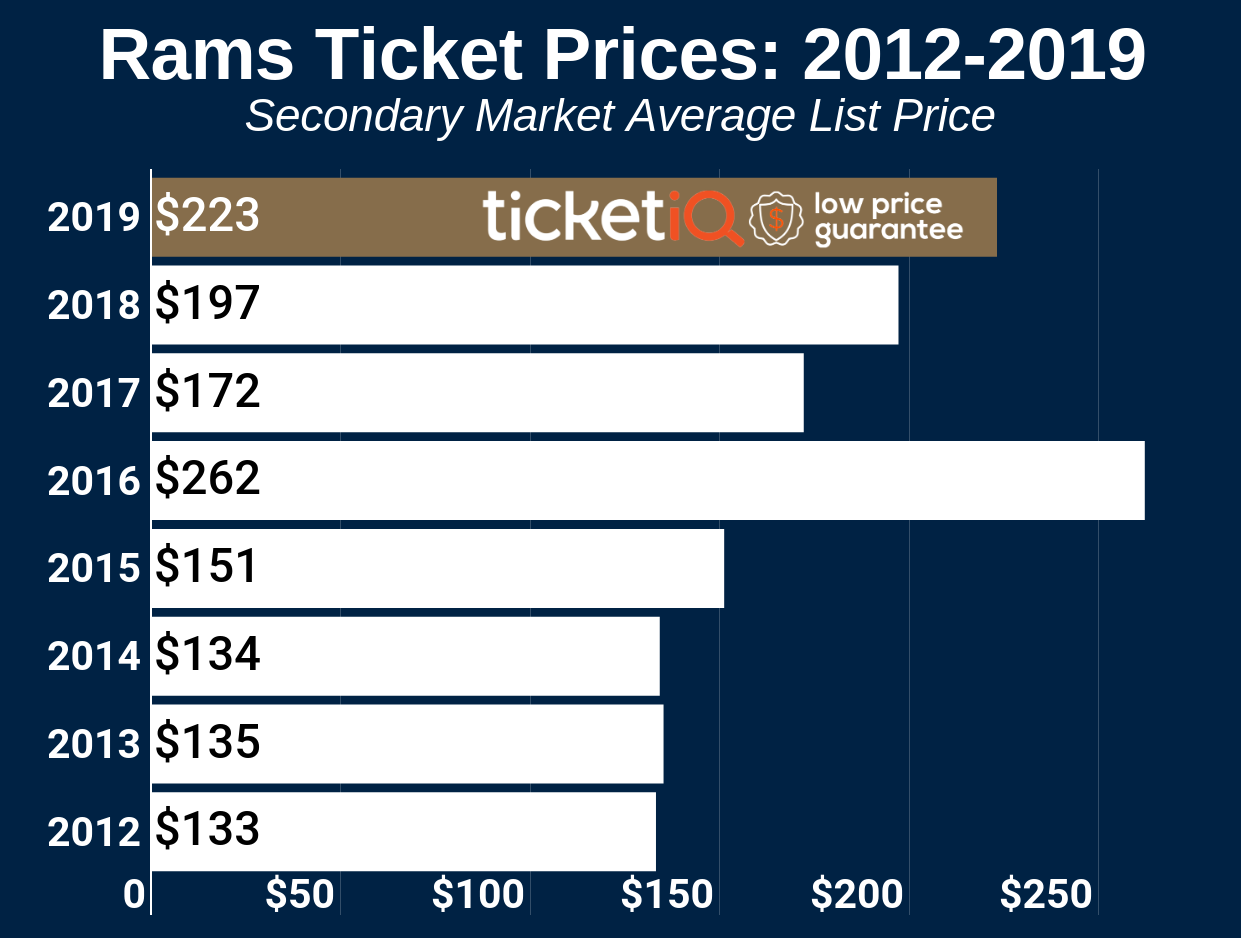 Ticket Prices For All Rams Home Games On The 2019 Schedule

The first 2019 regular season contest at Los Angeles Memorial Coliseum is a rematch of the NFC championship. The Rams were victorious, 26-23, in the game that had one of the most controversial referee no-calls in NFL history. There is no surprise that the asking price for this ticket is the highest of all the Rams’ 2019 home games.

When the Rams and Buccaneers last met in 2016, Todd Gurley ran for 85 yards and two touchdowns, as the Rams won, 37-32, and extended their win streak over Tampa Bay to five games. The get-in price is tied for the lowest price for a Rams home game this regular season.

Before sweeping the 49ers last season, the Rams had not had much success over the last decade in meetings with San Francisco. In Week 17 in 2018, the Rams rode Jared Goff’s four touchdowns to their NFL-best 13th win of the season.

The Bears have been very successful in recent history against the Rams, as Chicago has won six of the last seven meetings. In 2018, the Bears defense stifled Goff, Gurley and company. Chicago intercepted four of Goff’s passes while Jordan Howard and Tarik Cohen combined for 192 total yards.

The Ravens face the Rams for the first time in Los Angeles. The Rams will be looking for their first win over Baltimore since 2003. Gurley will look to improve from his 66-yard, one-touchdown performance in which the Ravens scored 13 unanswered points to win, 16-13, in 2015.

The Rams have had the Seahawks’ number recently, as Los Angeles finished 2018 by extending its win streak to three games over Seattle. Both of the contests in 2018 between the Rams and Seahawks were tight games, as the margin of victory was a combined seven points.

The cheapest ticket for a Rams home game this season is currently the season finale against rookie Kyler Murray and the Cardinals. Los Angeles swept the series from Arizona in both 2017 and 2018.