Where To Buy 2020 Miami Dolphins Tickets

Miami Dolphins tickets are available for sale on the secondary market as of the 2020 schedule release.

For more detailed data on 2020 Dolphins tickets, register for updates.

How Much Are 2020 Miami Dolphins Tickets

On the primary market, the Dolphins single-game ticket website page includes Ticketmaster links to each home game, and tickets start at $50 at Hard Rock Stadium. The cheapest seats are 300-Level Sections tickets on Sunday, October 25 at 1:00 PM against the Los Angeles Chargers. The get-in price for this contest on the secondary market is $60.

Ticketmaster has provided the following information related to the rescheduling of games: “If a game is postponed or rescheduled, your tickets are valid for the new date, so hang onto them and we will keep you posted.” 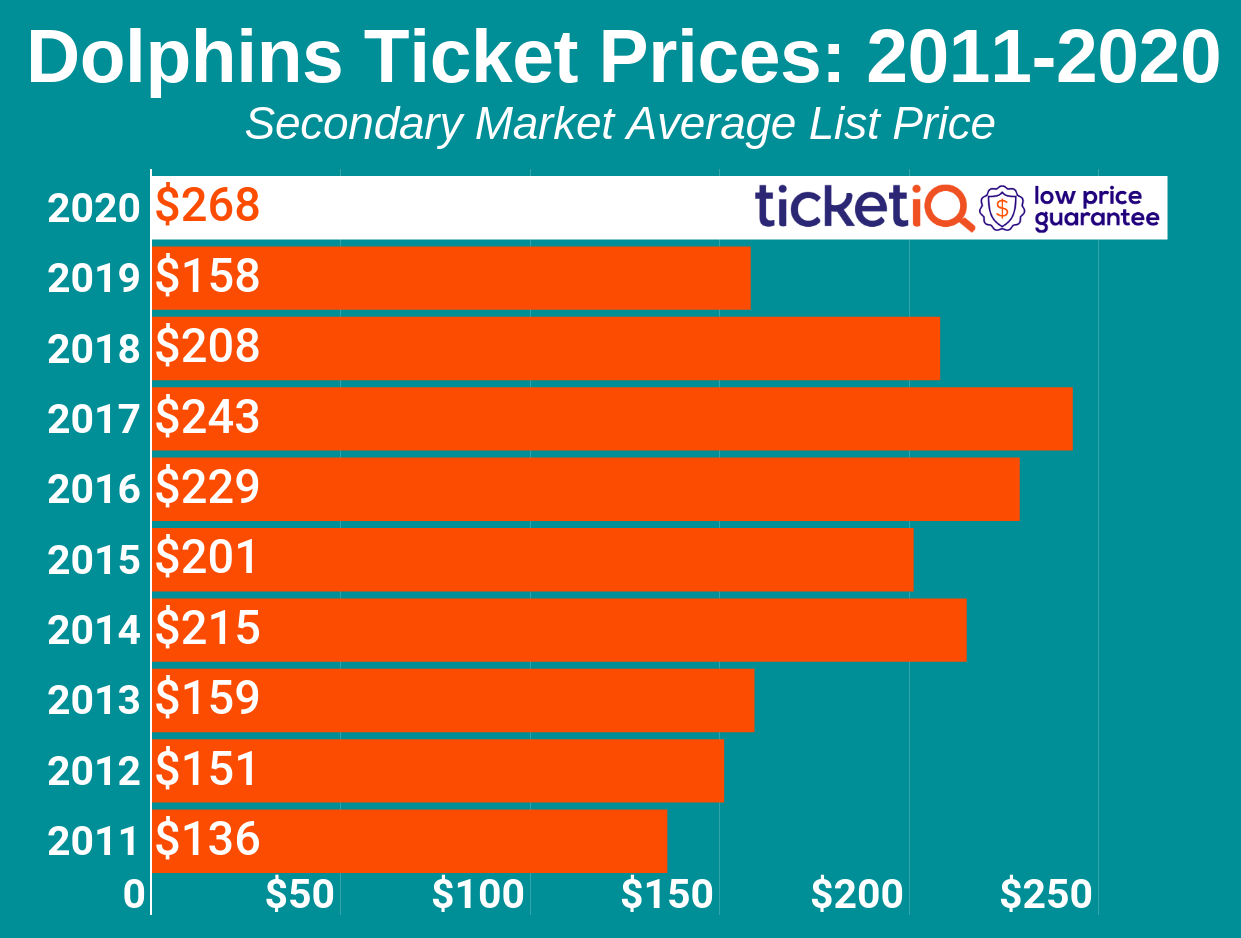 On the primary market, season tickets are available.

Season tickets start at $550 per ticket in several 300-Level Sections via the Dolphins’ Ticketmaster page, and the most expensive season ticket is $5,200.

There are no mini plans available, but group discounts start with 10 people. Fans can place a $250 deposit to have access to single-game tickets savings, seats together, access to unique fan experiences, and flexible payment options.

The Club Level is an air-conditioned club space with impressive views as well as food and beverage options.

The North Sideline Club has comfortable seats located between the 30-yard lines, and there is access to a private air-conditioned club below the seats.

The East and West Field Clubs include 14 boxes with up to four people each, who have access to their own private club through the field tunnels. These clubs both include all-inclusive food and beverage. The West Field Club has views of the Dolphins locker room.

At LIV, there is a nightclub experience that includes dancing, eating, and drinking.

The LIFEWTR Lounge is an open-air club that includes televisions to watch the rest of the NFL action. There is also an all-inclusive buffet and open bar, which includes premium LIFEWTR water.

The 72 Club is a premium seating experience with luxurious seating, and the 72 Club Living Room Boxes are private four-person boxes at the 35-yard line. Private televisions are in each box for fans to watch replays and highlights.

The Nine is an open-air suite between the 30-yard lines, and each member of the Nine has access to a private club.

There are also suites options at Hard Rock Stadium.

Other seating experiences include the Theater Box for four to six people, and four Corner Terraces for fans who would like to congregate outside without having to sit for the majority of the game.

To manage your Dolphins tickets, the team has a mobile app available on the App Store and Google Play. According to the website, the app needs to be at least version 4.8. The app is also used for mobile entry into the venue. The Dolphins require ticket holders to use mobile tickets to enter Hard Rock Stadium, and it is suggested to add the ticket to your phone’s mobile wallet to avoid slow WIFI or cellular signal while entering the stadium. Screenshots of the dynamic barcode on the ticket will not be accepted.

Where To Buy 2019 Miami Dolphins Tickets

The Miami Dolphins don’t call them season tickets, but fans can get a primary market season “membership” to see all the Dolphins home games via the team website. Single-game tickets are available through Ticketmaster.

With a membership, fans get the lowest prices for all home games, as well as access to other key events at Hard Rock Stadium, including international soccer matches the Miami Open. Fans can submit a request for Membership information or call the team directly.

Single-game tickets on Ticketmaster are available for all games, including the September 15 game against the defending Super Bowl champion New England Patriots. For most games, seats are available throughout the stadium, from the 300 levels to field-level seats.

On the secondary market TicketIQ has Low Price Guarantees on Dolphins tickets for all games on the 2019 schedule, in addition to Low Price Guarantees on all NFL tickets. That means that if you find a secondary market ticket for less on a site like StubHub or SeatGeek, we’ll give you 200% of the difference in ticket credit. TicketIQ customers save an average of 5%-20% compared to StubHub and SeatGeek.

How Much Are 2019 Miami Dolphins Tickets 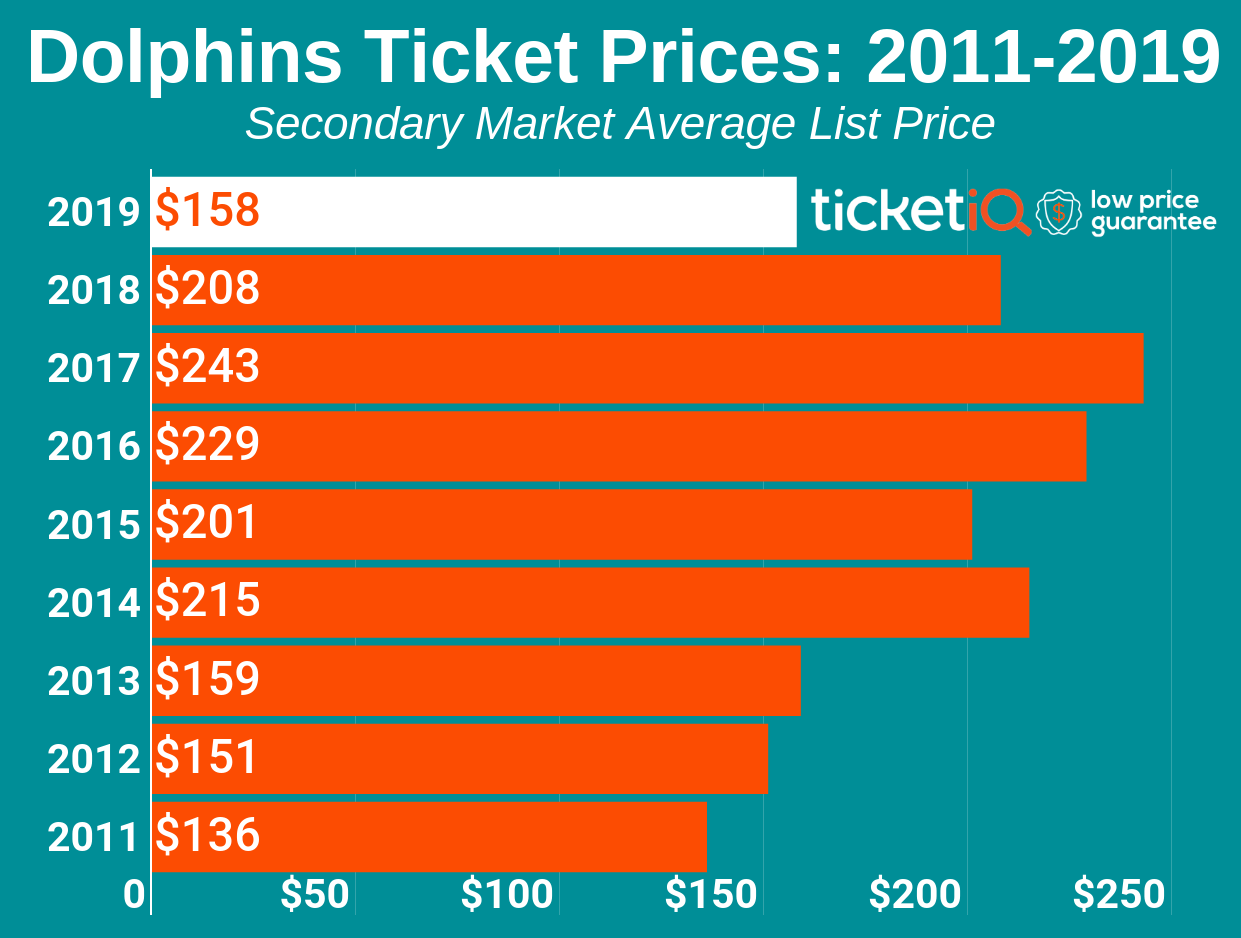 On the primary market, tickets for the Patriots game start at $132 and for the Philadelphia Eagles game on December 1, start at $178. For most other games, fans can get into the stadium for $60 or less.