Where to Buy 2020 Eagles Tickets

Philadelphia Eagles tickets are available for sale on the secondary market as of the 2020 schedule release.

For more detailed data on 2020 Eagles tickets, register for updates.

How Much Are 2020 Philadelphia Eagles Tickets 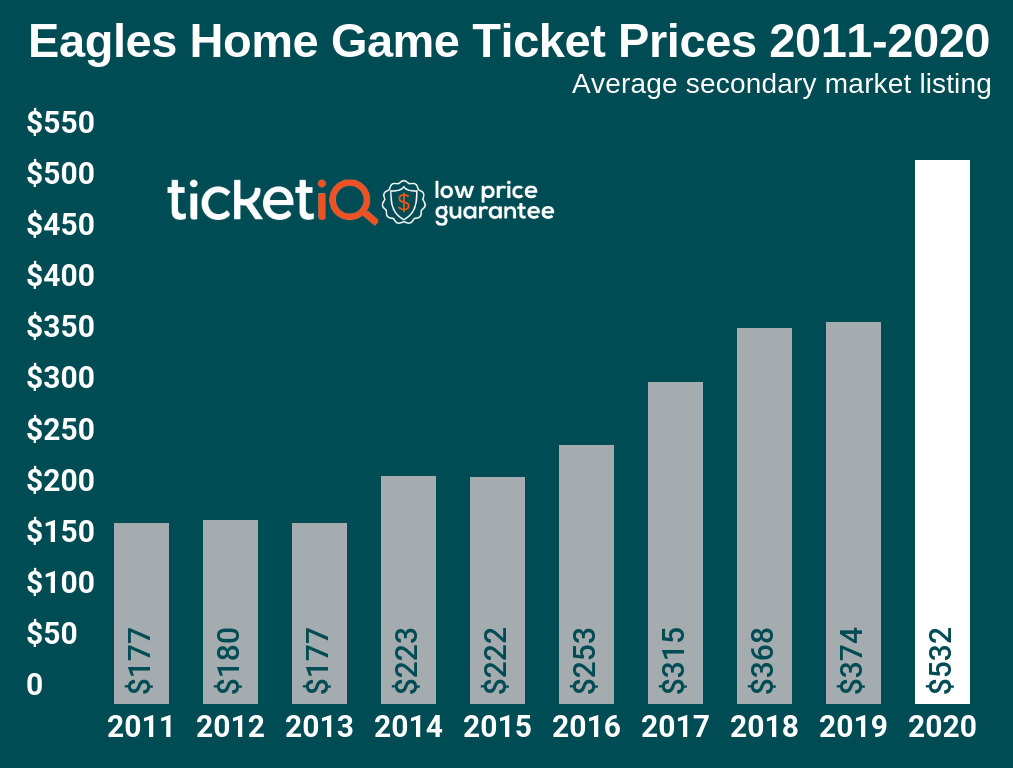 Season tickets are currently available on the Eagles website, and fans are required to purchase a Stadium Builder License in addition to season tickets. Season tickets can be purchased for a lump-sum fee or the Eagles offer financing. Prices vary depending on seat location.

All season ticket holders get merchandise discounts and access to the NFL RedZone channel via smartphone.

The Eagles offer multiple premium and club seating options, and all come with access to VIP parking and pre-sales to other events at Lincoln Financial Field. In addition to Club and Premium seating, the Eagles also have suite rentals and single-game hospitality packages available.

Axalta Tunnel Club: Members of this club get access to on-field seating as well as the Axalta Tunnel Club, which is located in the tunnel the Eagles use to access the field. Inside the Club, fans will find all-inclusive high-end food-and-beverage options, wide-screen televisions and other amenities. Each pair of Axalta Tunnel Club seats includes a charging station and access to a MicroSoft Surface Tablet.

Club Level Seating: Ticket holders get access to the Tork and Hyundai Clubs, which are climate-controlled lounges with upscale food-and-beverage options. Club Level seats have extra padding and are wider than standard seats. Ticket holders also have access to preferred parking.

The Philadelphia Eagles app is available to download at the App Store or Google Play. Fans can use the app for mobile ticketing and to manage season tickets. Fans who do not have smartphones can call the Eagles to arrange for other options to enter Lincoln Financial Field.

Carson Wentz’s return and a Super Bowl victory are driving the average asking price of 2018 Philadelphia Eagles ticket prices to an all-time high. According to data from TicketIQ.com, the secondary average market asking price of $368 is the highest since the company began tracking data in 2011. And that number is more than double the cost of a ticket to Lincoln Financial Field at the start of the decade.

Wentz, the No. 2 overall pick in 2016, went 11-2 before suffering a knee injury in December 2017, but Philadelphia surprised the league when Nick Foles stepped in and took the team all the way to its first Super Bowl victory, 41-33, against New England. The Patriots have played in three of the last four Super Bowls, winning two. That success has translated into sky-high tickets at Gillette Stadium – for the third consecutive year, Patriots tickets are the highest on the secondary market, currently trending at $624.

The highest average asking price for an Eagles ticket is for a game that won’t be played at Lincoln Financial Field – or in the U.S., for that matter. According to TicketIQ.com data, the Eagles-Jacksonville Jaguars game slated for Oct. 28 in London has extremely limited inventory and an average asking price on the secondary market of $1,000.

At home, the average secondary market ticket price runs the gamut, with a get-in price of less than $100 for the Dec. 23 Houston Texans game to an average of $569 for the season opener against the Atlanta Falcons. The game will be a rematch of last season’s divisional playoff game (Philadelphia won, 15-10) and pits the last two NFC Champions. Fans will likely get a chance to see the Lombardi Trophy before the game and the stadium is already adorned with Super Bowl banners.

Since February, the Eagles have seen plenty of turnover – 13 members of the Super Bowl roster became free agents, and only LB Nigel Bradham was re-signed. That said, Philadelphia shored up its defense with DE Michael Bennett and added Ravens WR Mike Wallace. read more...