San Francisco 49ers tickets are available for sale on the secondary market as of the 2020 schedule release.

For more detailed data on 2020 Giants tickets, register for updates.

How Much Are 2020 San Francisco 49ers Tickets 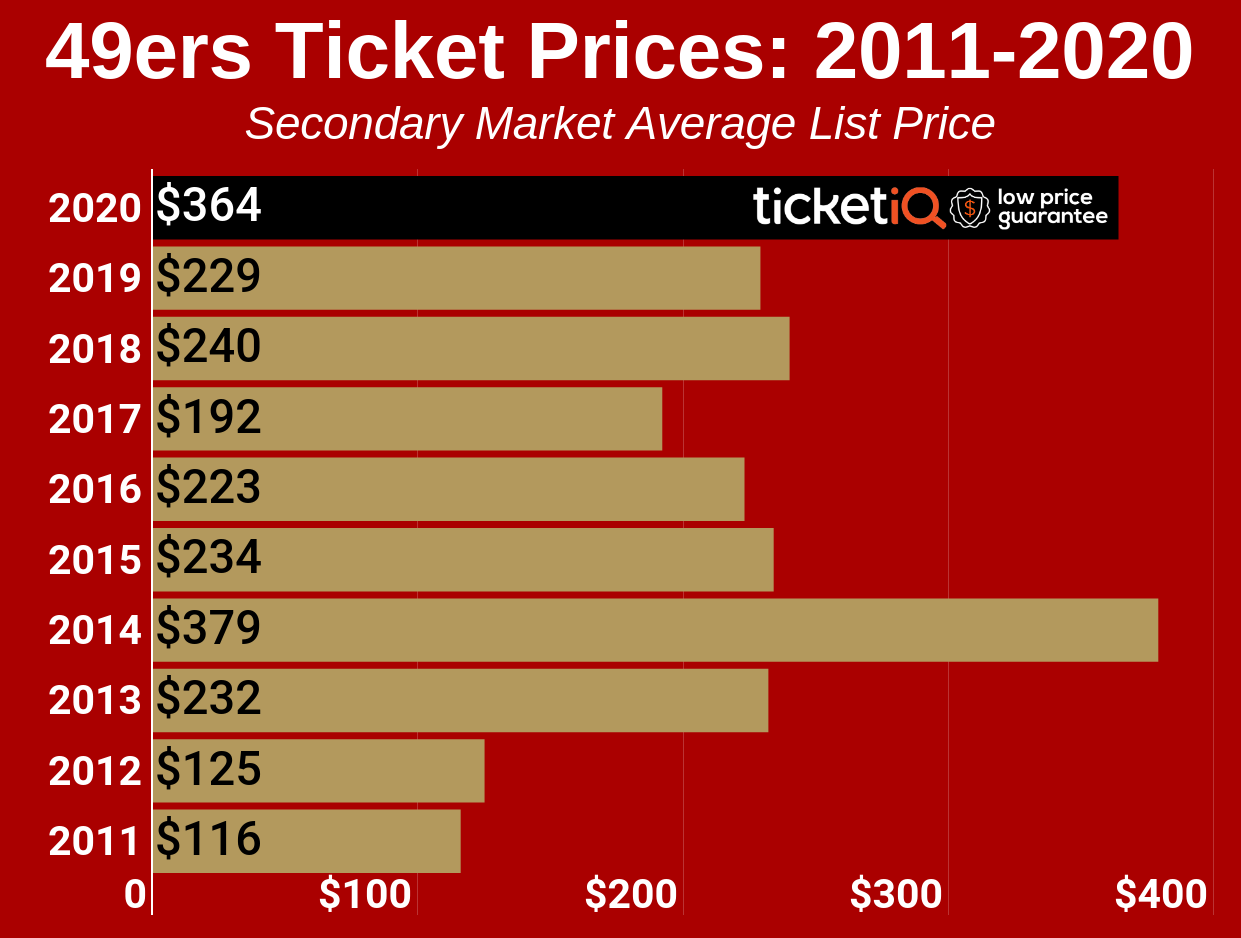 San Francisco 49ers season tickets are currently available, and fans must purchase an SBL (Stadium Builder’s License) in addition to the cost of season tickets. All season ticket holders will get inclusive snacks and non-alcoholic beverages, including hot dogs, garlic fries and nachos. Season ticket holders will also get access to an annual NFL Draft Party, priority post-season and single-game tickets, a holiday photo shoot at Levi’s Stadium, access to training camp, and more. Season tickets are available throughout the stadium, including at field level and in the Citrix Owners Seat section.

Citrix Owners Seats: Located high above the stadium, this plush club features movie-theater style seating outside and a high-end Club inside. The interior of the Club has bar-style and Club seating, and premium food-and-beverage offerings.

Field Level Season Tickets: These exclusive seats are a unique experience, offering fans the chance to sit just feet from the playing surface. Each field box has plush, comfortable recliners located behind the end zones. In-seat food service is included with the price of each seat.

Fans can access Levi’s Stadium via digital tickets, and are encouraged to do so. Fans can download season tickets and single-game tickets using the 49ers Mobile App. The team website provides a detailed video for how to download and use the app. Fans can also buy, sell or transfer tickets on the app.

On the secondary market, the season average asking price is was $194 for games at Levis Stadium at the beginning of the season but have risen 18% and is now $229. The cheapest chance to get into Levi’s Stadium on the secondary market this season will be for the November 17 Arizona Cardinals game. Tickets are trending at $166, making it one of only three games with an average asking price below $200. The priciest game is the season opener against the Pittsburgh Steelers, for which demand has pushed prices to $352.

Prices For All 49ers Home Games On The 2019 Schedule

Pair the home opener with a team the 49ers haven’t hosted in eight years and this game has the highest average asking price of the season. It’s been four years since these teams have faced each other, and the last time Pittsburgh was in San Francisco was 2011. The Steelers won the last meeting, 43-18, at Heinz Field in 2015, but the 49ers hold an 11-10 all-time series advantage.

This is the third priciest game on the secondary market, and the first time in four years the teams have played. The Browns have had a tough time of it lately, but could be on the upswing – after going 1-15 and 0-16 in 2016 and 2017, they very nearly got to .500 last season. The teams last played in 2015 with the Browns winning. Cleveland leads the all-time series, 12-7.

This game will be a good chance for fans to get into Levi’s Stadium for a lower price – the game is the second cheapest on the secondary market. Carolina and San Francisco didn’t play last season, but the 49ers won the two previous meetings (2016, 2017). Carolina’s last win against San Francisco was in a Divisional Playoff Game in 2014.

The only Monday Night Football game for the 49ers this season pits them against one of their biggest rivals, and will be the first time the teams have played since last season’s 49ers’ overtime victory. This rivalry didn’t really blossom until the Seahawks joined the NFC West, and Seattle is 12-3 against San Francisco since it drafted Russell Wilson in 2012. This game is the fourth cheapest at home this season.

The 49ers will have a short week after the MNF game, and while the Cardinals are divisional rivals, this game is the cheapest of the season at home. The teams play twice a year and the Cardinals have owned the 49ers of late, winning the last eight consecutive.

The 49ers and Packers have a long and rich history that features seven playoff games, and a rivalry that dates to 1950. One of the premiere teams in the NFL, the Packers haven’t played at San Francisco since 2015, and have won the last two meetings (2015, 1018), snapping a four-game 49erswin streak. It’s no surprise this is the second priciest game on the secondary market.

These teams have been playing since the Falcons joined the NFL in 1966, and the 49ers traditionally dominated the rivalry until Atlanta won four in a row between 2004-10. But San Francisco holds a 47-31-1 all-time series advantage. The teams last played in 2016, when Atlanta won, 41-13, on their way to Super Bowl LI. This is another chance to get a seat at Levi’s Stadium for less than $200.

The average asking price for this game could easily rise if the Rams have the kind of season they had last year. It’s a short flight from Los Angeles to San Francisco, and plenty of football fans dot the California skies during the NFL season. Both teams are original members of the NFC West and there’s been a lot of parity over the years – San Francisco holds a slight 69-67-3 all-time series advantage.