With the first selection of the 2019 NHL draft, the Devils chose Jack Hughes, the American forward widely expected to be the next big NHL superstar.  They also traded for exciting defenseman P.K. Subban. Despite the big off-season additions, Devils ticket prices for home games at The Prudential Center on the secondary ticket market are down from last season and at their lowest point since 2011. 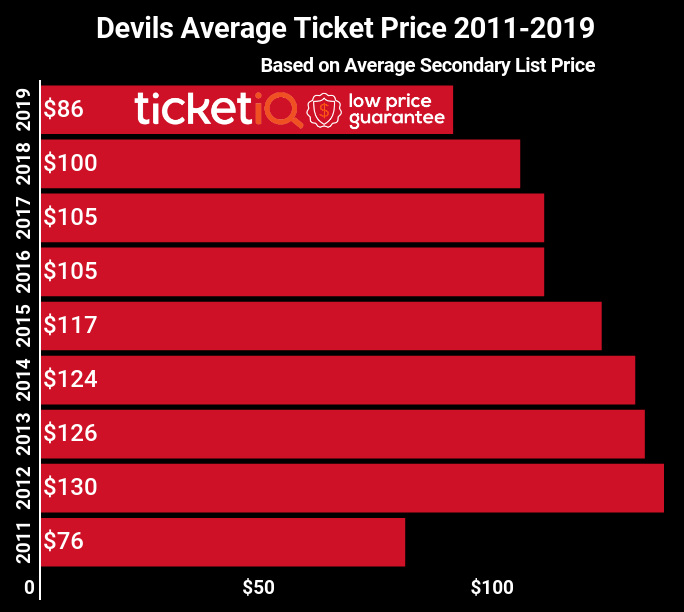 Tickets are available directly from the team for all home games via Ticketmaster, with a few hundred tickets available for sale in the upper level and lower level for most games.

5 and 10 game mini plans are available directly from the team and come with access to pre-sales for any Stanley Cup Playoff games.

TicketIQ has Low Price Guarantees for all sold out seats for every game at Prudential Center, which means that if you find a secondary market ticket for less on a site like StubHub or Vivid Seats, we’ll give you 200% of the difference in ticket credit. TicketIQ customers save up to 25%

On the secondary ticket market, ticket prices start as low as $20 for weeknight games, while the most expensive games against the Rangers have the cheapest tickets starting at $100. Opening night against the Jets has tickets starting at $85 for the cheapest tickets, while the most expensive tickets in row GL1 on the glass in section 9 is listed for $411. For that game, lower level tickets between the blue lines start around $170 and Club Seats, located in sections 8 and 19 at center ice, start at $250 for the opening night. For Lower demand games, the cheapest Club Seats are listed for $150. For those cheaper games, lower level seats start around $50 between the blue lines and $30 for corner seats or behind the goals.