Season tickets, partial plans and single-game New York Rangers tickets are currently on sale via the Rangers website through partner Ticketmaster.  Single-game tickets went on sale on Friday, September 13 via Ticketmaster, and many games, including November 12 against Pittsburgh, December 6 against Montreal, and January 21 against the New York Islanders are already nearly sold out on the primary market. Below is an example of a Rangers seating chart with a good amount of unsold face value options. 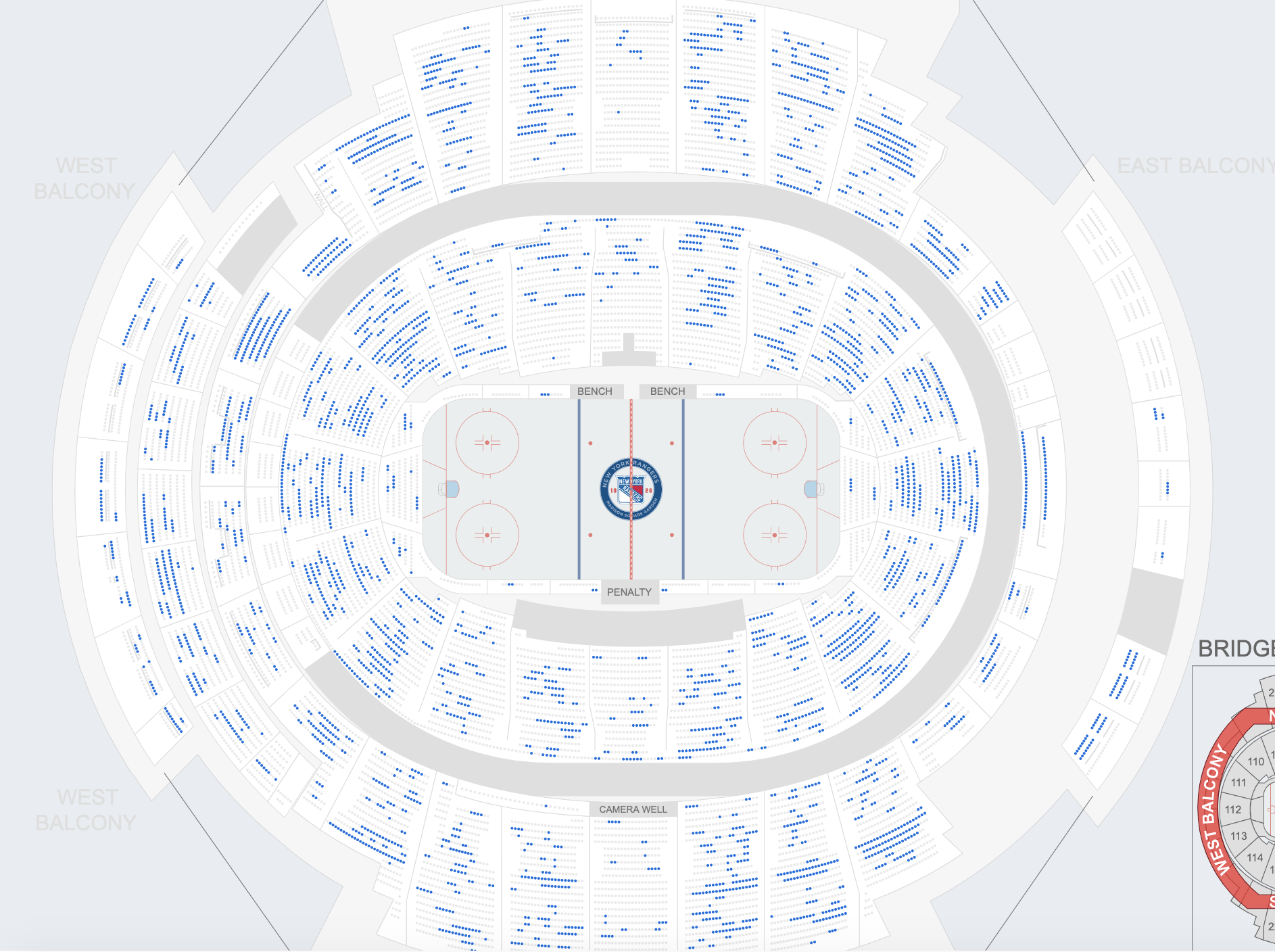 On the secondary market, TicketIQ has Low Price Guarantees on all NHL tickets. That means that if you find a secondary market ticket for less on a site like StubHub or Vivid Seats, we’ll give you 200% of the difference in ticket credit. TicketIQ customers save an an average of 5%-20% compared to StubHub and SeatGeek. Below are the cheapest tickets on the secondary ticket market for sold out Rangers tickets at Madison Square Garden. 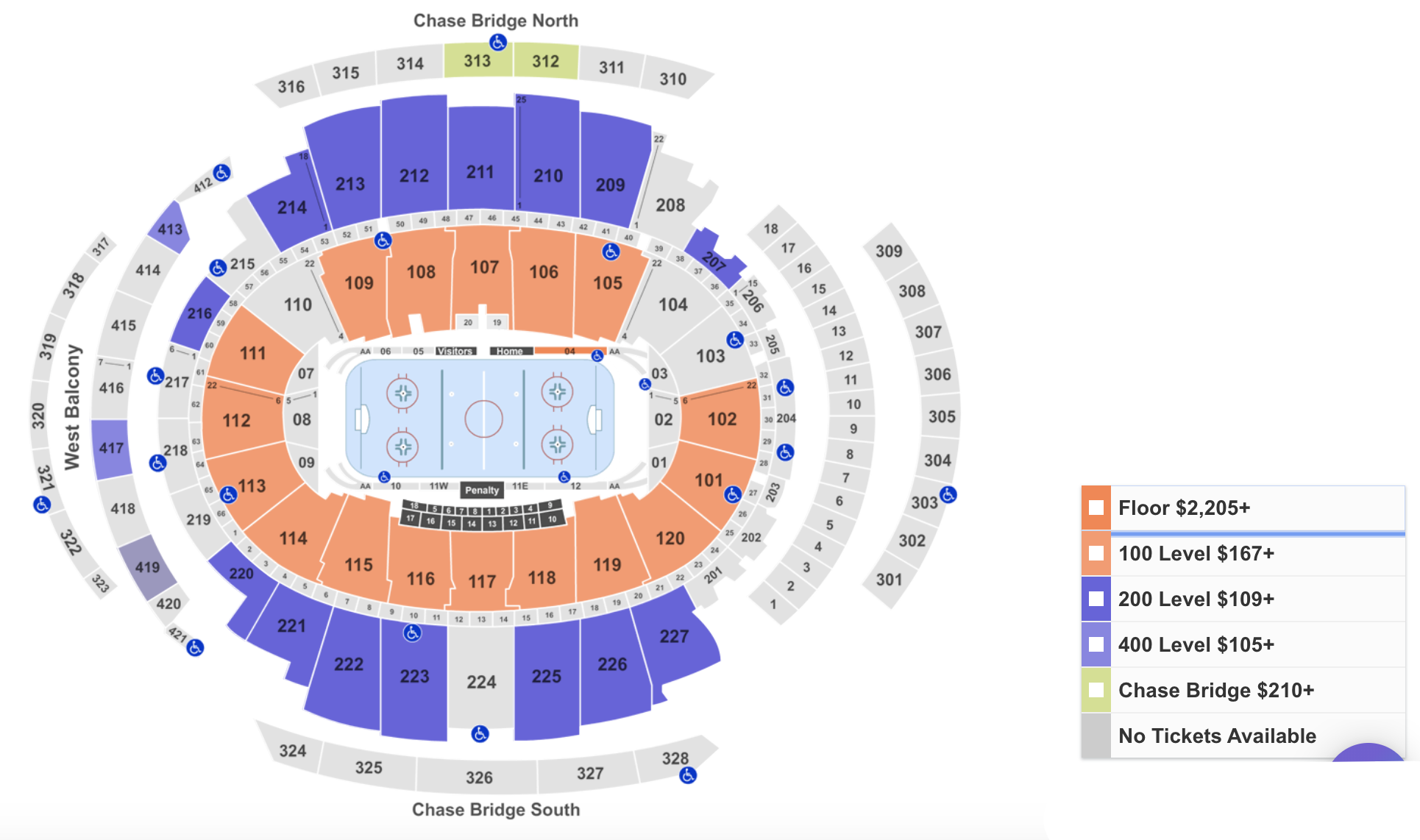 With a $270 average asking price on the secondary market, the Rangers have the second priciest tickets across the NHL. The highest average is $301 for a Toronto Maple Leafs home game. Rangers tickets are up $9 from last season and are tied with 2017-18 as the second priciest of the decade. Fans drove the average up to $318 in 2016-17, a year after the Rangers won the Metropolitan Division and advanced to the Eastern Conference Finals. 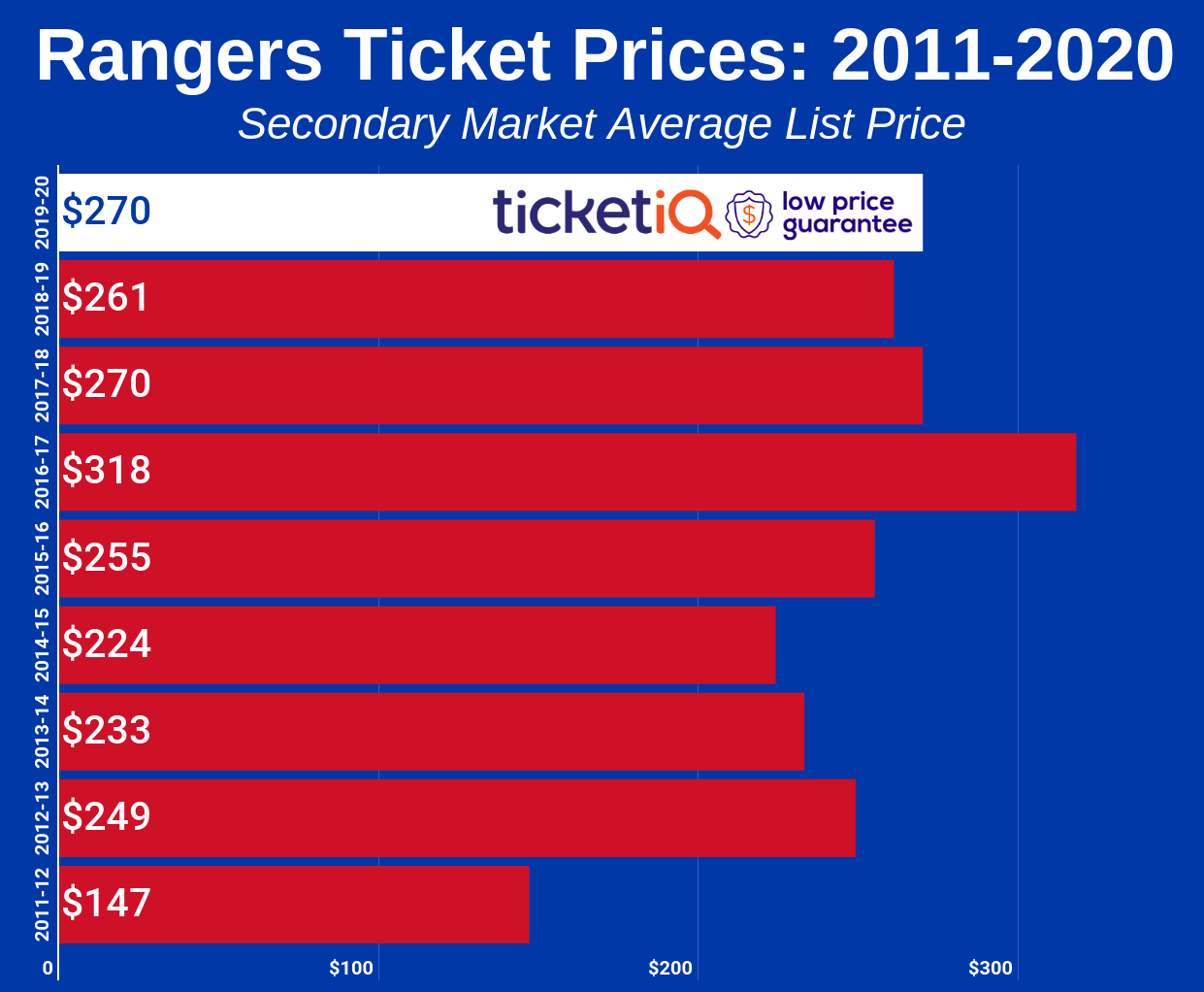 The priciest game on the secondary market will be the December 27 Carolina Hurricanes game, which is trending at $377 and the cheapest ticket is $159. All of the Top 10 games have an average asking price of $323 or above and two games against the cross-town Islanders are among the Top 10.

On the secondary market, the cheapest game to get into is currently October 22 against Arizona, for which the cheapest seat is $74.

Where Are Season Tickets and Partial Plans at Madison Square Garden

Fans can choose between two half-season plans, and four quarter-season (11-game) packages, and ticket holders get priority for playoff tickets, discounts at the MSG Team store, and can manage tickets online.

There are four quarter-season plans to choose from, and the Value Plan starts at $1,476 for Section 101 on the corner behind the net. Seats in the 100 sections are available for all quarter plans.

Where Are Club Seats at Madison Square Garden

MSG offers premium seating throughout the arena. The Lounges are located on the Bridge Level with multiple lounges available for groups of between 28-126. Lounges can be purchased with custom food-and-beverage packages.

Suites are located on the upper levels and have private entrances, premium menus and plush seats. Inside the suites, fans will find club chairs, a video wall and exclusive dining options.

The most exclusive club at MSG is the Madison Club, a members-only club that gives fans access to Rangers and Knicks games, as well as other big-name sporting events from boxing to college basketball.

MSG now has mobile ticketing, the preferred method of entry for the Rangers. The Madison Square Garden App is available via the App Store or Google Play, and fans can buy, sell or transfer tickets with the app. The Rangers provide an extensive FAQ section about the app.

Top 10 Most Expensive Rangers Games on the Secondary Market

After a last-place finish in the Metropolitan Division and some key changes during the off-season, demand for Rangers tickets is slightly down over last season, but the asking price on the secondary market is third highest since TicketIQ.com began tracking data in 2011. Below is how Rangers tickets stack up against the secondary market across the NHL. As you can see below, 2018 New York Rangers tickets are down 3%. The most expensive ticket of the decade was $318 in 2016-17, followed by $270 last season. Though the Rangers finished fourth in the Metropolitan in 2016-17, they were coming off a season that ended in the conference finals. The previous season, New York made it to the Stanley Cup Final, where they lost to the L.A. Kings. 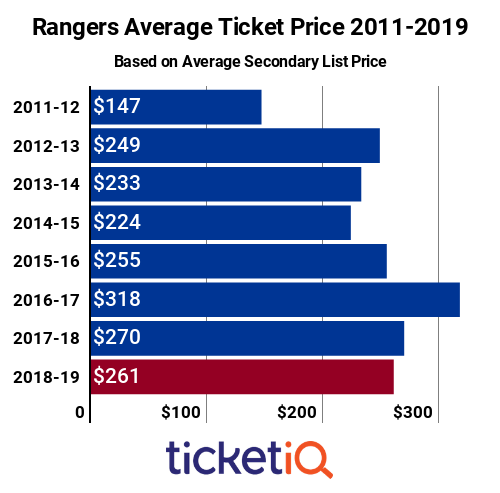 With a $261 average asking price, Rangers tickets are ranked No. 4 in terms of price across the NHL. The Toronto Maple Leafs are ranked No. 1 with a $332 average asking price. Season tickets are available through the team, and fans can purchase full or half season packages. With either, ticket holders get priority access to post-season tickets and discounts at MSG team stores. Single-game tickets are available through the team's primary market partner, Ticketmaster, and are available for all 44 home games, including the October 4 season opener against Nashville. The primary market get-in price for that game is $135 for a seat in Section 413, high about the goal.

5 Most Expensive Games On The 2018-19 New York Rangers Schedule:

Each of the five most expensive games of the season will cost fans an average of more than $300 for a seat at Madison Square Garden. The two priciest games of the season currently have average asking prices just $1 apart -- $373 for the November 24 Washington Capitals game and $372 for the December 23 Philadelphia Flyers game. Both matchups feature long-time rivals. The Caps enter the game as defending division champs. TicketIQ.com has tickets to both games available, including many with the company's Low Price Guarantee. If any of the three teams get off to a good start, and enthusiasm builds, prices for both games could increase. 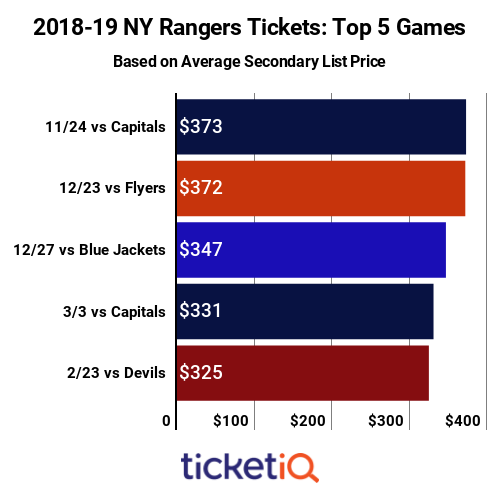