Where to Buy 2019-20 Pittsburgh Penguins Tickets

Single-game tickets on the primary market for the 2019-20 Pittsburgh Penguins are currently available on Ticketmaster. The team open their 10th season in the at PPG Paints Arena. Below is an example of a typical Penguins seating chart and availability, which shows that there are good amount of unsold face value options directly from the team. 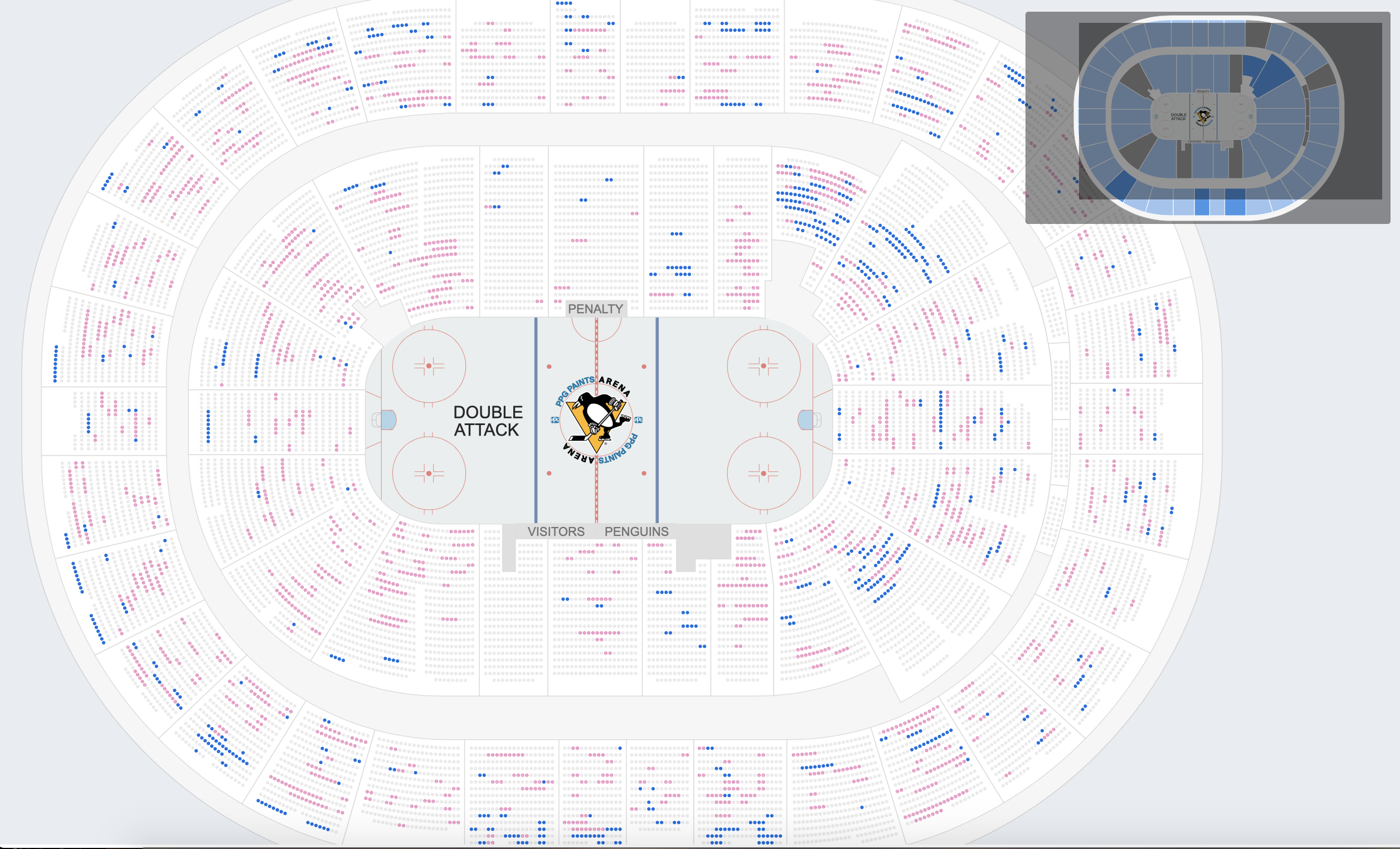 On the secondary market, TicketIQ has Low Price Guarantees on sold out NHL games. That means that if you find a secondary market ticket for less on a site like StubHub or SeatGeek, we’ll give you 200% of the difference in ticket credit. TicketIQ customers save an average of 5% to 20%, compared to StubHub and SeatGeek. Below is a seat map showing the cheapest tickets on the secondary ticket market by zone for their most expensive game at PPG Paints Arena against the Golden Knights on October 19th: 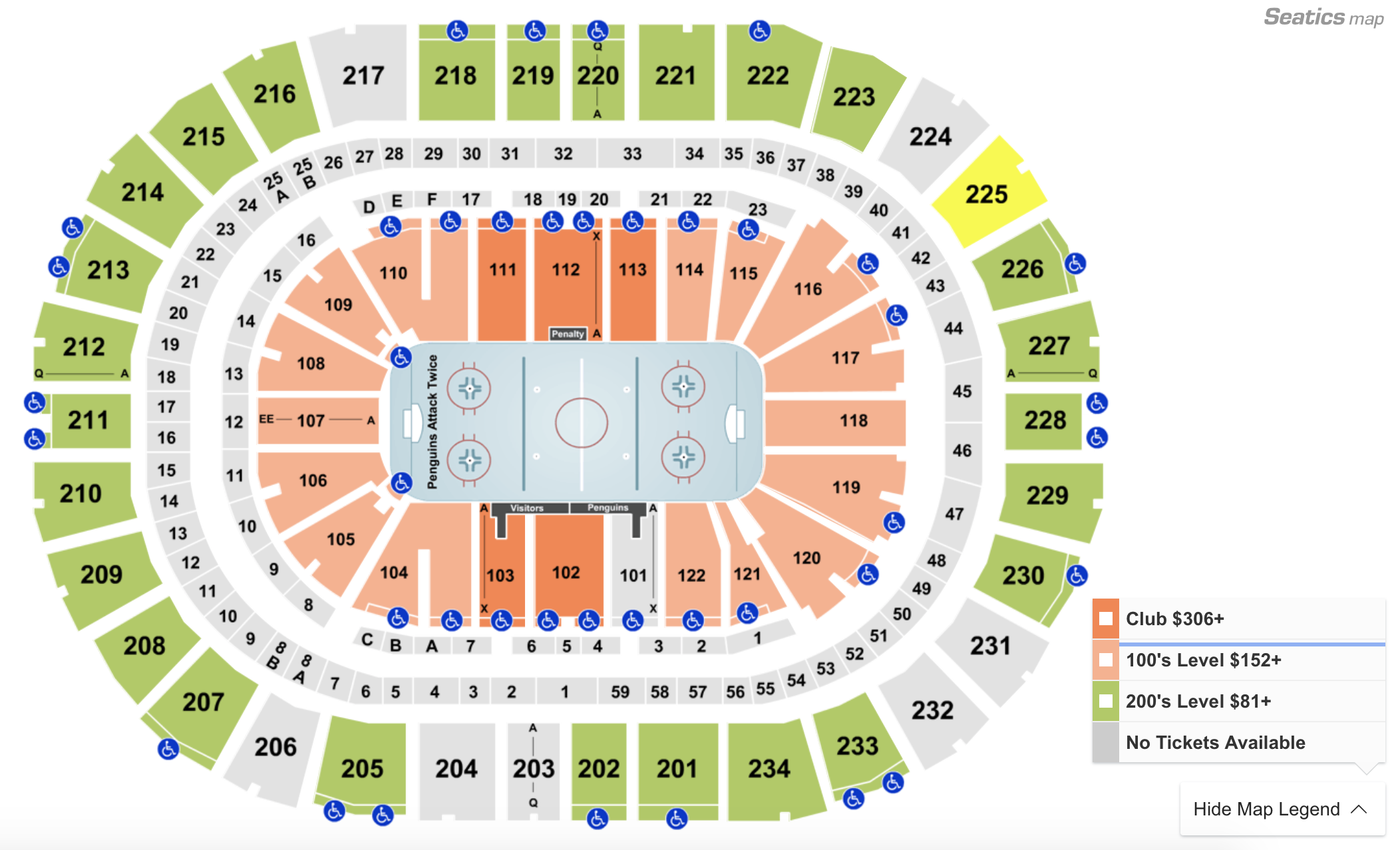 How Much Are 2019-20 Pittsburgh Penguins Tickets

Pittsburgh Penguins tickets are the 10th-most expensive in the NHL on the secondary market, with a current average asking price of $126, a 4% decrease from last season.

This season’s secondary market price ranks as the team’s lowest over the last decade. The Penguins are looking to make their 14th consecutive postseason appearance in 2020. Their streak is by far the best current one in the league. 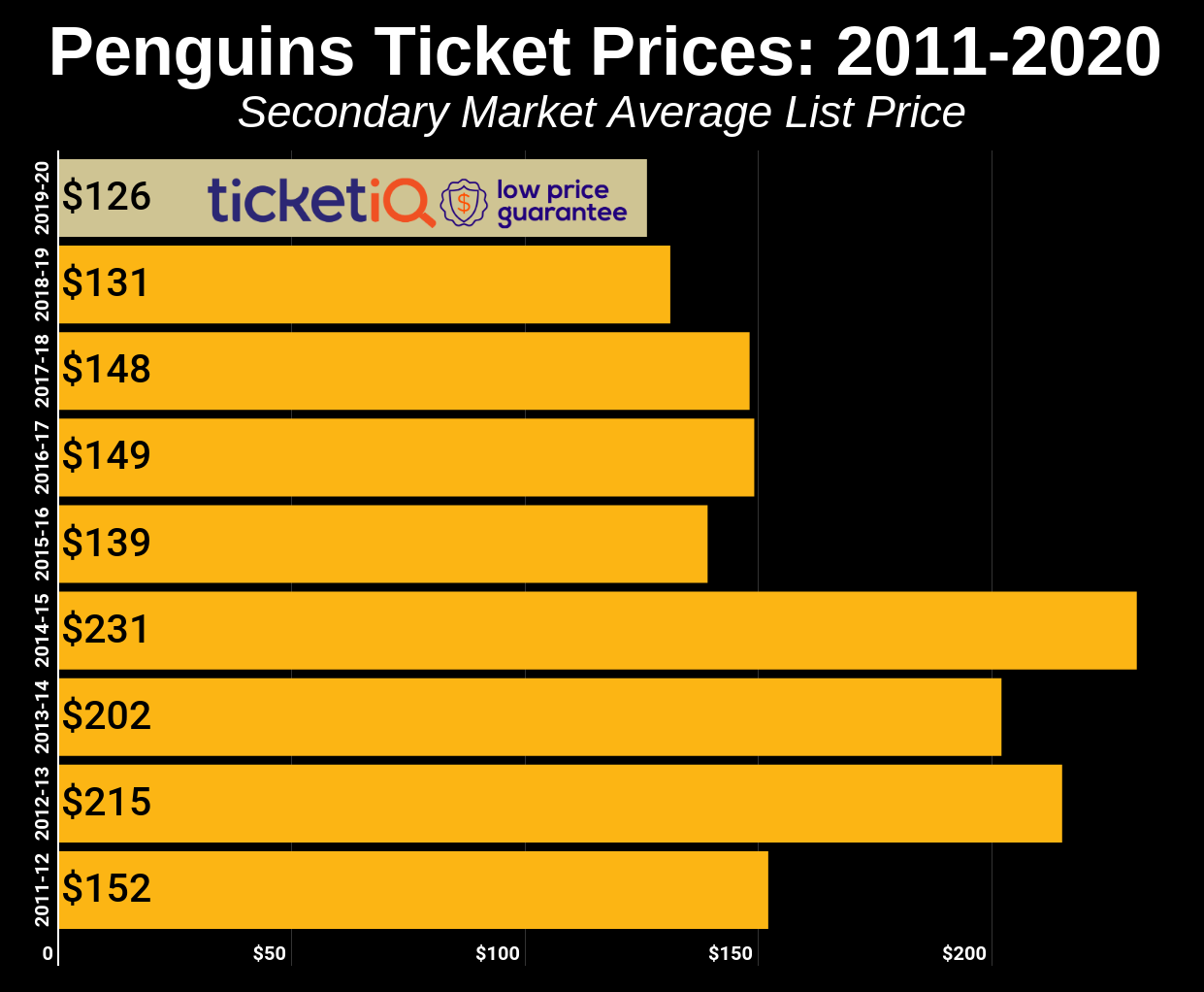 What are the Penguins Season Ticket and Mini Plan Options

Fans interested in season tickets can fill out the following form, and half season plans are also available. The season ticket holder handbook and other helpful information can be found on the Penguins ticket website.

Where are Club Seats at PPG Paints Arena

The Penguins offer many premium seating experiences, including the following:

Each Executive Suite Rental, located on the PNC Legends Level, include 16 tickets, food and non-alcoholic beverages, a Penguins hat for each guest, access to all arena clubs, and three parking garage passes to the Jim Shorkey Auto Group Garage.

The Media Deck is high above the ice, which allows for a bird’s-eye view of the PPG Paints Arena ice. It includes 30 tickets and access to the Captain Morgan Club on the FedEx Level. Other amenities include private restrooms, two parking passes, food and non-alcoholic beverages, and a Penguins hat for each guest.

Suite 66, which is the first five rows next to the Penguins’ bench, includes the following unique experience: upscale dinner with an open bar, access to private bunker lounge featuring Mario Lemieux memorabilia, six parking passes, a Penguins hat for each guest, and private viewing of the Penguins’ runway.

PPG Paints Arena exclusively will be using mobile ticketing via the Penguins App, which is available at the App Store or Google Play.

The Top 10 Most Expensive Penguins Games on the Secondary Market

Three of the top 10 priciest games at PPG Paints Arena this season involve three of the most recent Stanley Cup Final participants. The Vegas Golden Knights, the 2018 Western Conference champions, are the most expensive contest.

Pittsburgh Penguins ticket prices have been on a steady slide since the Pens won back-to-back Stanley Cups in 2015-16 and 2016-17. Pittsburgh finished second in the Metropolitan Division and lost in the second round of the playoffs in 2017-18, and after those two Cups, fans in Pittsburgh are spoiled -- and pushing prices down. Below is how Penguins ticket prices stack up on the secondary market across the league. As you can see below, 2018-19 Pittsburgh Penguins tickets are down 11% compared to last season. Tickets are the least expensive since 2011, when secondary ticket marketplace TicketIQ.com began tracking data. The most expensive ticket of the decade was 2014-15 when tickets were $231 and the Pens won it all. 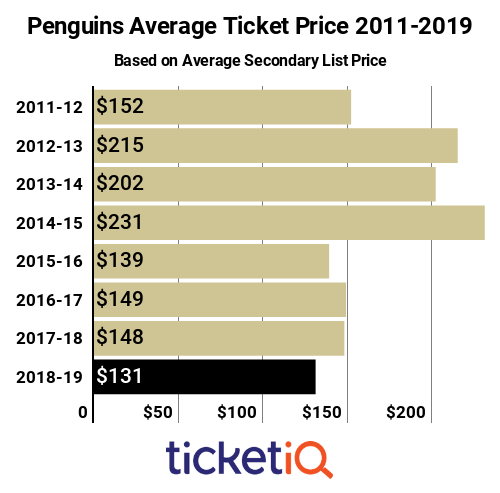 With a $131 secondary market average asking price, Penguins tickets are ranked No. 17 in the NHL in terms of price, well below the $332 that the No. 1 Toronto Maple Leafs are commanding. Full and half season ticket packages are available through the team's website, and season ticket holders get priority access to post-season tickets as well as exclusive gifts and contests during the season. Single-game tickets are available through primary market ticket partner Ticketmaster, though for the home opener against the defending Stanley Cup champion Washington Capitals, only standing room tickets are available. On the secondary market, TicketIQ.com has seated tickets for the same game starting at $78.

It's no surprise the top five games in terms of price are against the two Stanley Cup finalists and Toronto, Philadelphia and New York, all long-time Penguins' rivals. But the priciest game of the season is currently the November 3 Toronto Maple Leafs game, which has an average asking price of $202. It is the only game above the $200 mark, though the December 1 Philadelphia game is close, with a $197 average asking price. The only primary market tickets available for the Toronto game are standing room only, while TicketIQ.com has seats in both the upper decks and lower level, both with the company's Low Price Guarantee. 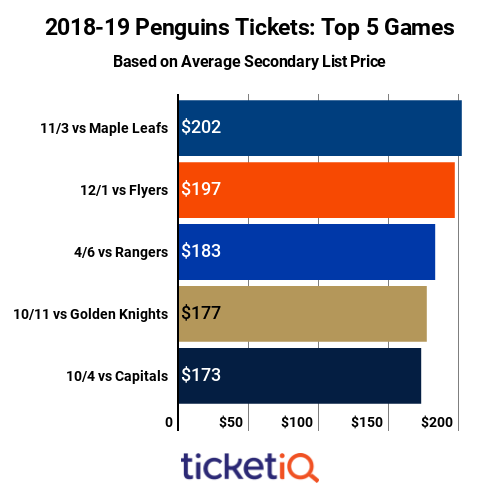