Single-game tickets on the primary market for the 2019-20 Toronto Maple Leafs season are currently available. Ever since leaving the famous Maple Leaf Gardens, the Leafs have played in the heart of downtown, in what’s currently known as the Scotiabank Arena. Single-game tickets are available through Ticketmaster. Below is an example of a Maple Leafs seating chart showing the availability of unsold face value options for most game. 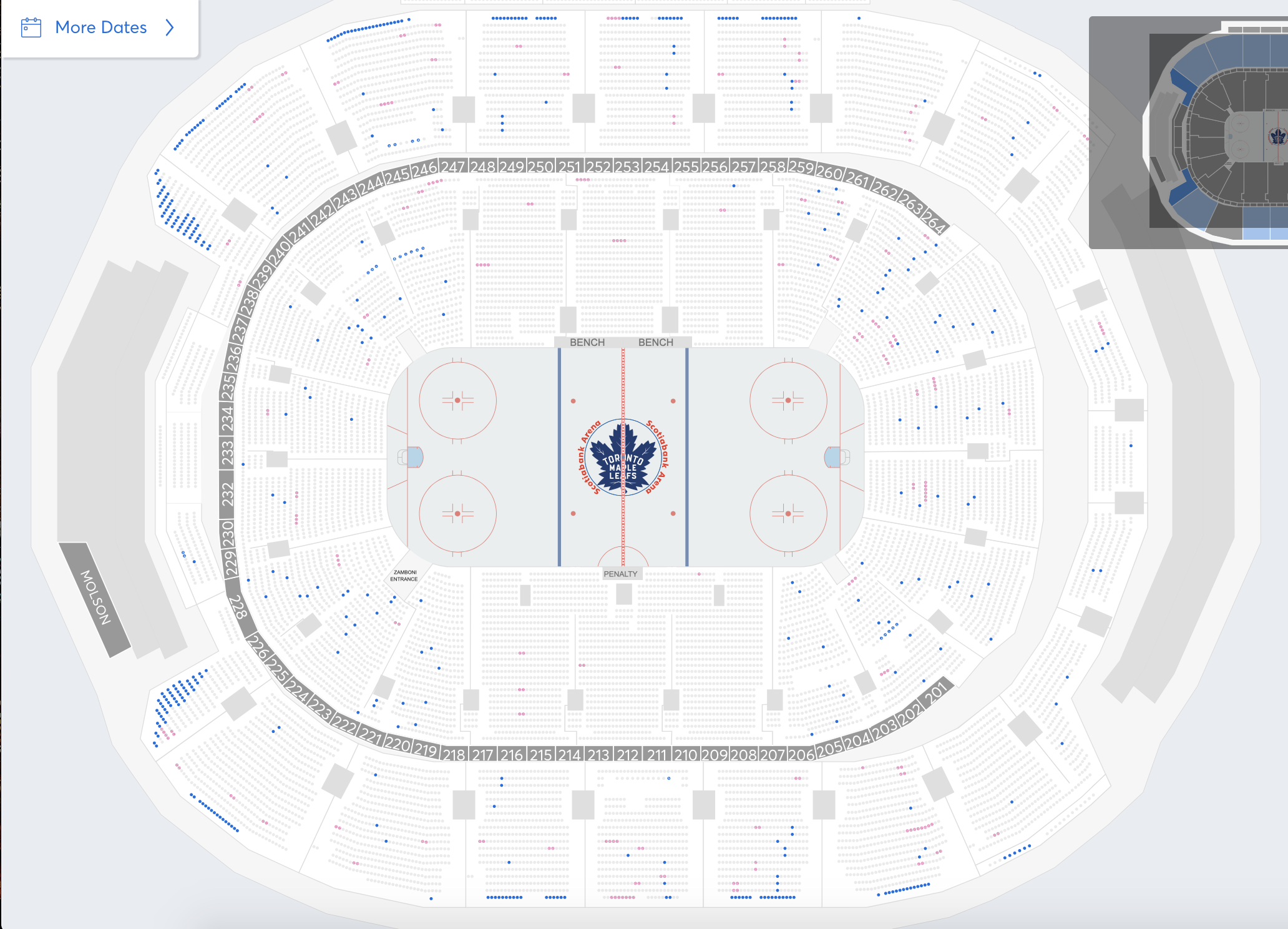 On the secondary market, TicketIQ has Low Price Guarantees on NHL tickets. That means that if you find a secondary market ticket for less on a site like StubHub or VividSeats, we’ll give you 200% of the difference in ticket credit. TicketIQ customers save an average of 5% to 20%, compared to StubHub and VividSeats. Below are the cheapest tickets on the secondary ticket market for a higher demand Leafs games at the Scotiabank Arena: 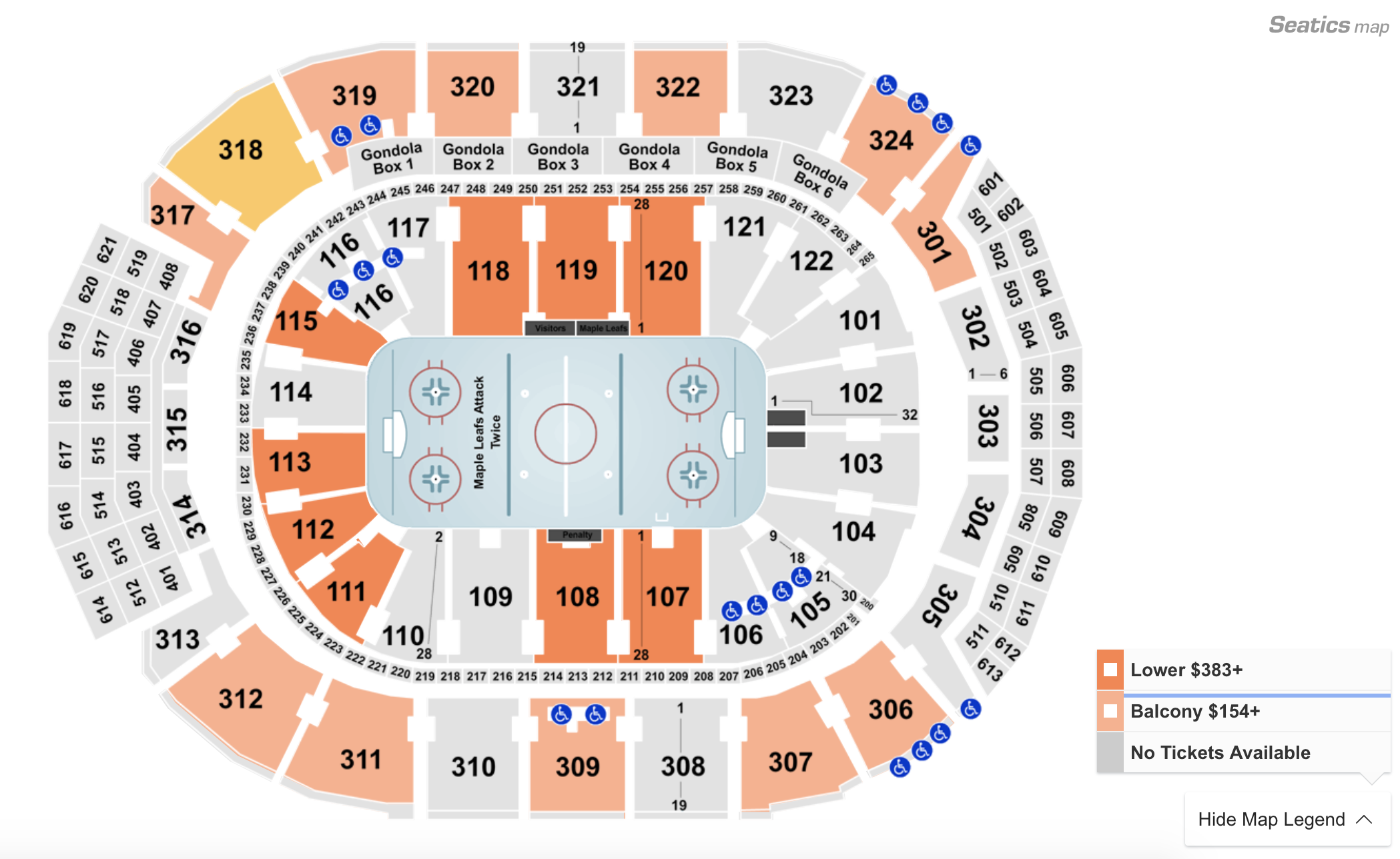 How Much Are 2019-20 Toronto Maple Leafs Tickets

On the primary market, Leafs tickets are expensive and in limited supply. For more expensive games, like a Saturday night visit from the Montreal Canadiens, standing room tickets start around $80 USD; a seat in the corner of the upper deck goes for $130 USD, while tickets in the corner of the lower bowl start at $175 USD. For games against less desirable opponents, standing room tickets begin at $80 USD. Seats in the cheapest upper bowl seats, once again in the corner, are $100 USD, and no seats in the lower bowl remain. On the whole, you’ll want to act quickly when shopping for Leafs seats; they’re all expensive and, for most games, the lower bowl is completely sold out.

On the secondary market, there’s more seating variety but the same high prices. The Maple Leafs enter the 2019-20 season with the most expensive resale tickets; seats are currently averaging $343, comfortably the highest in NHL. That’s a 3% increase over last year’s resale prices. 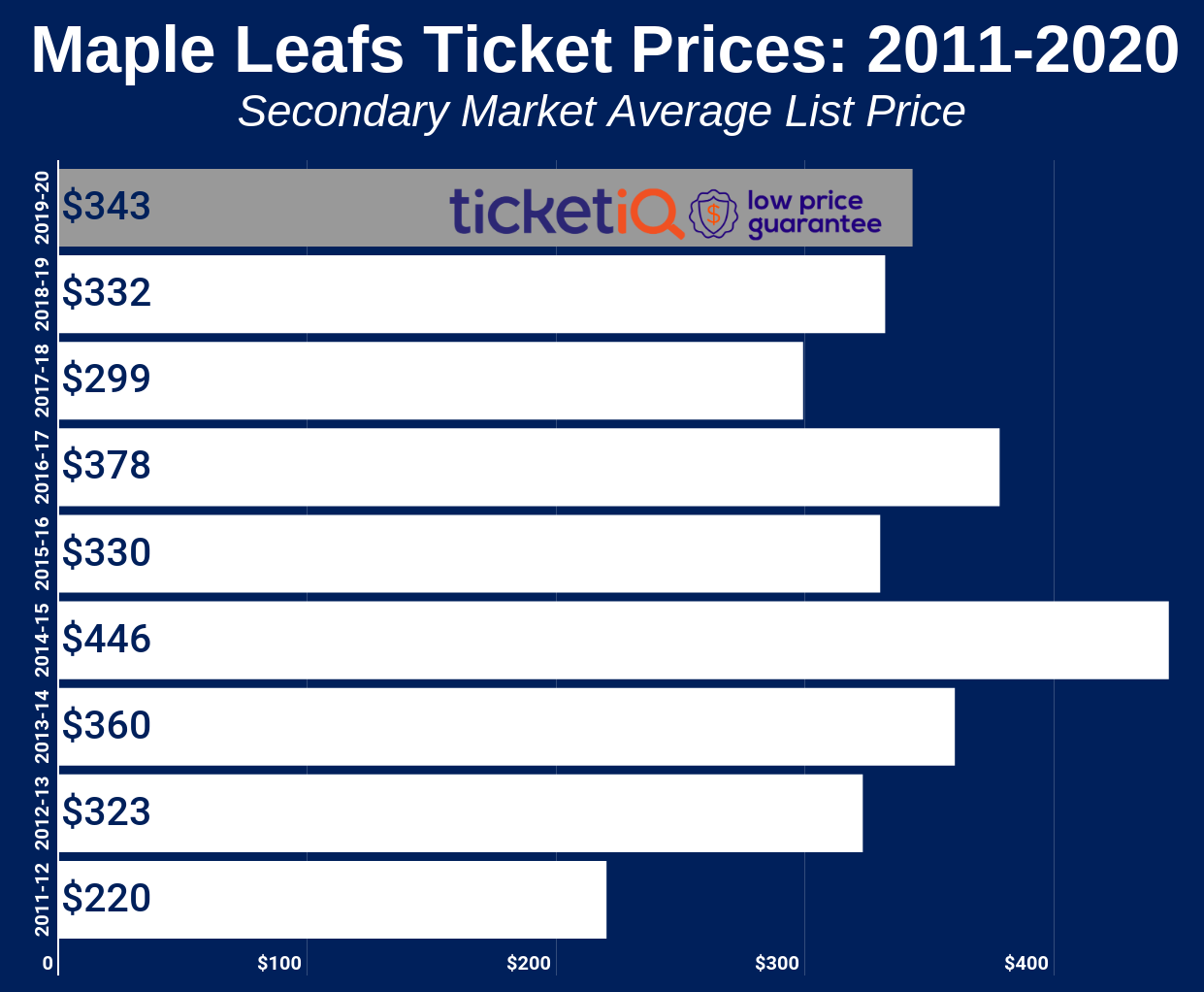 While the Leafs are undeniably a fun team to watch—they have one of the best top six forward groups in the league—their extreme ticket prices are hard to justify. Even if the team wracks up a projected 102 points this season, you’ll be paying $3 per point; that’s the worst cost per point ratio in the entire NHL. If Mike Babcock is able to lead his team on a historic Stanley Cup, however, you’ll wish you paid the price to be in the building.

If you’re going to be attending several Maple Leafs games, the team offers one main ticket plan. While it’s too late for this current season, it’s never too early to prepare for next year.

As you might assume for a hockey team locate in Canada’s largest city, season tickets for the Leafs are in high demand. There’s a sizable waiting list so, if you’re interested, it’s best to sign up ASAP.

Once you’re a season ticket holder, you’ll have some flexibility options, like reducing your commitment from 42 to 22 games and even forgoing a year of tickets without losing your status. You’ll have to get on—and then make your way off—the waiting list first, though.

Where are Club Seats the Scotiabank Arena

If you’re looking for a premium experience while watching the Maple Leafs, the Scotiabank Arena offers several suite and club seating options.

The Mastercard World Elite Suite is designed for large groups of fans; the arena has combined two conventional 200 Level suites into one larger space, capable of accommodating 40 guests.

200 Level Executive suites are accessed from a dedicated hallway in the arena. They’re located 30 rows from the ice and you have the option to preorder food and beverages.

400 Level Lodge suites are located in the West End of the arena and offer eight theater-style seats and additional stool seating. The suite has the same internal amenities as other boxes, including optional catering and a VIP entrance.

500 & 600 Level Theater suites provide an aerial view of the ice from high above the net where the Leafs shoot twice. Since these boxes are at the top of the building, they offer a unique perspective on the action.

Like many other teams, the Maple Leafs use mobile ticketing. If you’re attending a game, you can log into your Maple Leafs and add your tickets to your Apple Wallet or Google Pay. You can also pull up mobile tickets on your phone’s Internet browser or use physical tickets; print at home tickets, however, will not be accepted.

On average, the 10 most expensive Maple Leafs games cost over $300 on the secondary market. If you look at get-in prices, however, there are some bargains to be had, with tickets for most games hovering below $200.