Where To Find Tickets


Where to Find Hamilton Tickets

The cheapest face-value tickets for Hamilton through Ticketmaster start at $199 for the latest block of tickets that has been released, for shows November 12, 2019-June 7, 2020. Shows prior to November 12 appear to be sold out on the primary market.

TicketIQ offers a Low Price Guarantee on Hamilton tickets for all sold out hows, including those sold out on the primary market. According to TicketIQ, seats begin at $214 through the summer, and the best deals are usually for the matinee shows on Wednesdays, Saturdays and Sundays. The remaining summer shows are sold out on the primary market, so fans will be wise to shop around.

TicketIQ also offers its Low Price Guarantee on all theater tickets, which means if you find a secondary market ticket for less on a site like StubHub or Vivid Seats, we’ll give you 200% of the difference in ticket credit. TicketIQ customers can save an average of 55-20% compared to StubHub or Vivid Seats.

Hamilton opened Off-Broadway at The Public Theater in February 2015, and was immediately sold out. It moved to the Richard Rodgers Theater in August 2015. The show initally played at Vassar College in upstate New York (2013).

Hamilton combines singing and rapping to tell the story of founding father Alexander Hamilton, who may be best known as the founding father who died in a duel with Aaron Burr. The show traces Hamilton’s life and is based on the 2004 biography by Ron Chernow.

What sets the show apart is that it uses hip-hop, R&B, pop and soul alongside traditional-style show tunes, and characters are intentionally not cast by color or ethnicity. In fact, in the show, many of the key roles are played by actors of color. From the start, Hamilton has garnered both critical and box-office acclaim.

Before getting to Broadway, Hamilton was also getting spectacular reviews. From Variety’s review of the Off-Broadway production 2015:

“There should be a huge audience for this irresistible show. Although the premise sounds outlandish, it take about two seconds to surrender to the musical sweep of the sung-through score and to Miranda’s amazing vision of his towering historical subject as an ideological contemporary who reflects the thoughts and speaks the language of a vibrant young generation of immigrant strivers. It’s a wonderfully humanizing view of history.”

The music, lyrics and book were written by Lin-Manuel Miranda, who also starred as Hamilton in the original cast. The show won 11 Tony Awards in 2016, including Best Musical, and was nominated for a record-setting 16. It also got a Grammy Award for Best Musical Theater Album and a Pulitzer Prize for Drama.

The Richard Rodgers Theater is located at 226 West 46th Street in New York City. The theater seats 1,319 in Orchestra, Mezzanine and Balcony sections. The theater opened in 1925 and has been home to 11 Tony Award-winning shows, the most of any Broadway theater. 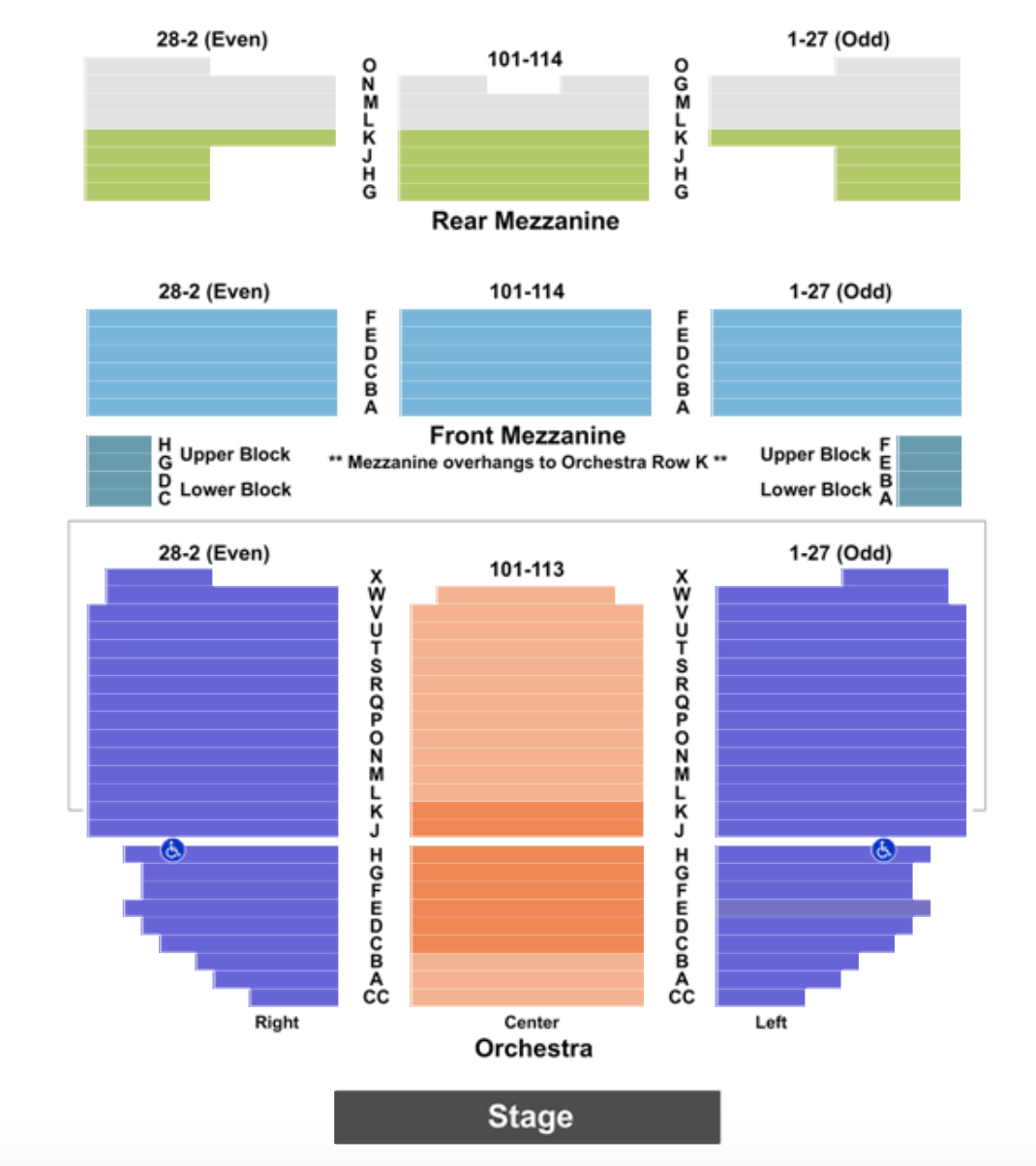 The Richard Rodgers Theater can accommodate wheelchairs in the middle of the Orchestra Level, and Orchestra Rows A-K are the only ones in the venue without steps. There are no steps into the theater from the street. There are no elevators or escalators in the theater.

Inside the theater, patrons will find restrooms and drinking fountains downstairs, though there is a wheelchair-accessible restroom on the Orchestra Level.

Headsets are available at the theater free of charge, and patrons with vision issues can request “low vision seats” when booking.

Standing-room only seats are available on the day of the show for $40. These seats are sold on the cancellation line, and some may be obstructed view.

Other Venue and Show Details

The show runs approximately 2 hours, 45 minutes including one 15-minute intermission. It is recommended to get to the venue 45 minutes before showtime.

Children under the age of 4 are not permitted in the theater.

While there are no Rush tickets available for Hamilton, fans can try the cancellation line on the day of the show. This is a first-come, first-served situation, and there is no guarantee that seats will become available. In this situation, seats are sold at their original ticket price.

Forty-six Hamilton tickets are available daily for $10 through a digital lottery here. Patrons may enter the lottery once daily and receive up to two tickets. The lottery opens two days before each performance and closes at 9 a.m. the day of the performance, and the accepted payment method is via credit card. Seats are in the front row of the Orchestra. Winners will be notified by 11 a.m. at on the day of the performance.

For theatergoers with flexibility, TKTS Discount Booths are a great way to see theater in New York City at affordable prices. Known for their iconic booth located around Manhattan, they offer discounts of 20% to 50% off face value tickets, and have limited availability of unsold tickets for purchase on the day of the event. TKTS Discount Booths in New York City, including the flagship location in the heart of Times Square, with booths at South Street Seaport and Lincoln Center. One extra benefit to using TKTS is that your ticket purchase does toward supporting the Theatre Development organization, which is dedicated to sustaining and sharing the arts and building audiences of the future.